Here are the first images inside Notre Dame Cathedral after a fire destroyed its roof and iconic spire.

Its iconic twin bell towers remained visibly intact as a symbol of hope that from the ashes Notre Dame could be rebuilt after an inferno engulfed the iconic cathedral.

Inside, amidst the rising smoke and rubble, the golden altar cross was seen glowing as firefighters made their way into the fire-ravaged cathedral to survey the damage.

"Notre Dame was destroyed but the soul of France was not," Michel Aupetit, archbishop of Paris said on RMC radio.

Firefighters declared success Tuesday morning in an over 12-hour battle to extinguish an inferno engulfing Paris' iconic Notre Dame cathedral that claimed its spire and roof, but spared its bell towers. (Ludovic Marin via AP)

New images from Tuesday afternoon showed several pieces of wooden furniture, including chairs and benches, appeared intact, but there was a gaping hold in the nave's roof, wiht a pole of debris lying underneath.

A hole is seen in the dome inside Notre cathedral in Paris, Tuesday, April 16, 2019. Firefighters declared success Tuesday in a more than 12-hour battle to extinguish an inferno engulfing Paris' iconic Notre Dame cathedral that claimed its spire and roof, but spared its bell towers and the purported Crown of Christ. (Christophe Petit Tesson, Pool via AP)

Junior Interior Minister Laurent Nunez told reporters Tuesday that "some weaknesses" had been identified in the structure of the cathedral.

Paris Deputy Mayor Emmanuel Gregoire described authorities' "enormous relief" at salvaging pieces such as the Crown of Christ, which were quickly transported to a "secret location" by officials after the fire.

Flames and smoke are seen as the interior continued to burn inside the Notre Dame Cathedral in Paris, France, April 16, 2019. (Reuters)

General view from the entrance of Notre Dame cathedral in Paris, Monday, April 15, 2019 after the fire engulfed its upper reaches (Philippe Wojazer/Pool via AP)

The Rose windows – a trio of immense round stained-glass windows over the cathedral’s three main portals that date back to the 13th centtury, were also saved, Aupetit told reporters.

This file photo a crown of thorns which was believed to have been worn by Jesus Christ and which was bought by King Louis IX in 1239. (AP)

At dawn, the twin 226-feet towers – immortalized in Victor Hugo's 1831 novel "The Hunchback of Notre Dame” – swarmed with building specialists and architects, looking tiny from the ground as they conducted analysis.

Paris firefighters declared success Tuesday morning, saying the fire had been extinguished and that workers extinguishing any smoldering residues.

"The task is — now the risk of fire has been put aside — about the building, how the structure will resist," said Junior Interior Minister Laurent Nunez in front of the cathedral.

An investigation has been launched to determine the cause of the blaze, which Paris prosecutors said was being treated as an accident right now. Officials said the fire was possibly a result of the restoration work taking place at the global architectural treasure. 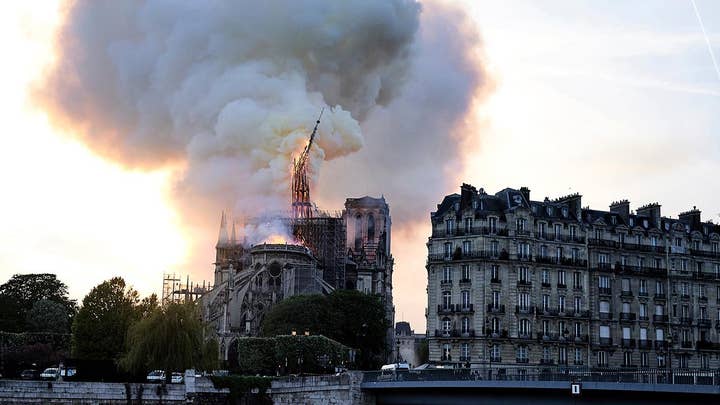 “Nothing suggests that it was a voluntary act,” Remy Heitz said outside the Gothic cathedral on Tuesday.

Paris firefighters' spokesman Gabriel Plus said “the whole of the roof has been devastated… a part of the vault has collapsed, the spire is no more.”

Firefighters declared success Tuesday in a more than 12-hour battle to extinguish an inferno engulfing Paris' iconic Notre Dame cathedral that claimed its spire and roof, but spared its bell towers and the purported Crown of Christ. (Christophe Petit Tesson, Pool via AP)

"Globally the structure is holding up well, but some weaknesses have been identified particularly in the vault and the gable of the northern transept, which have to be secured," Nunez told reporters at the scene.

Dramatic video from Monday showed heavy flames engulfing the center spire as it came crashing down. The sight stopped pedestrians in their tracks along the Seine River, which passes under the cathedral. 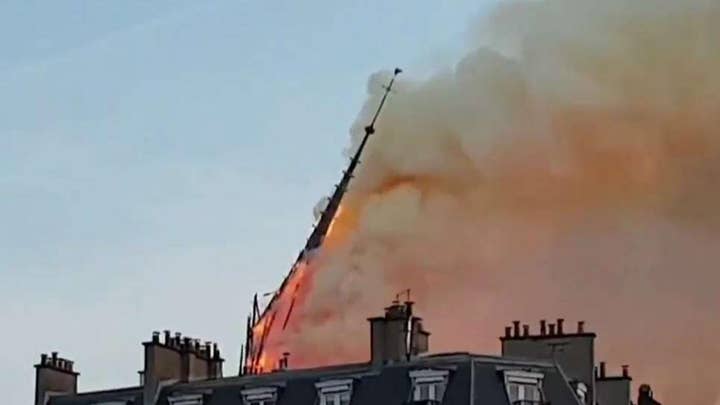 “I hope I will see that cathedral again in my lifetime and that I will celebrate a mass there. I'm 67 now and if all goes well, even if it takes 10 years, I will be 77 and still able to do it," Monsignor Patrick Chauvet, the rector of Notre Dame, told France Inter radio.

President Emmanuel Macron called it a “terrible tragedy” and vowed to rebuild the cathedral that he called “a part of us.” 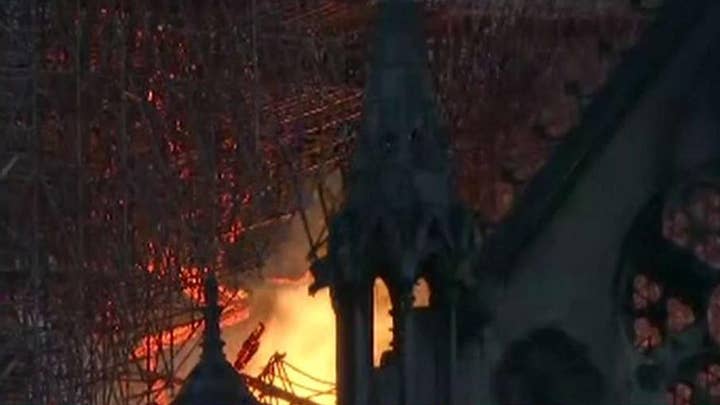 A statement from Francois-Henri Pinault said "this tragedy impacts all French people" and "everyone wants to restore life as quickly as possible to this jewel of our heritage."

Pope Francis said in an early morning tweet that the world unites “in prayer with the people of France.”

“Today we unite in prayer with the people of France, as we wait for the sorrow inflicted by the serious damage to be transformed into hope with reconstruction. Holy Mary, Our Lady, pray for us,” he wrote.

The chief architect of Cologne cathedral said it could take decades to repair the damage caused to the Notre Dame.

Peter Fuessenich, who oversees all construction work for the Gothic cathedral in the German city, told broadcaster RTL on Tuesday that "it will certainly take years, perhaps even decades, until the last damage caused by this terrible fire will be completely repaired." 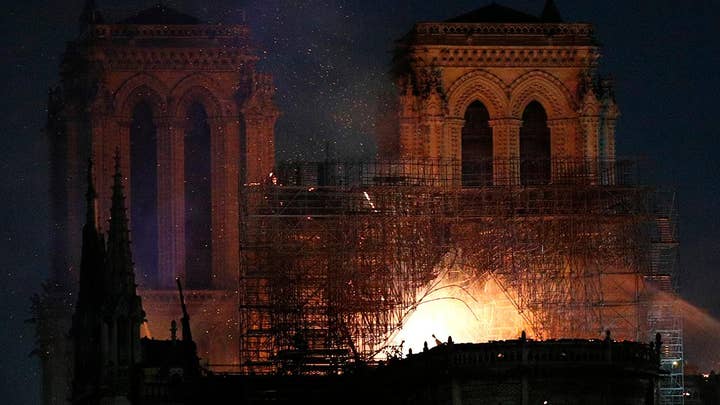 Meanwhile, a representative of one of the five companies which had been hired to work on renovations to the Notre Dame cathedral's roof says "we want more than anyone for light to be shed on the origin of this drama."

Julien le Bras' company has 12 workers involved in the refurbishment, though none were on site at the time of the fire.

Le Bras insisted that "all the security measures were respected," and "workers are participating in the investigation with no hesitation."