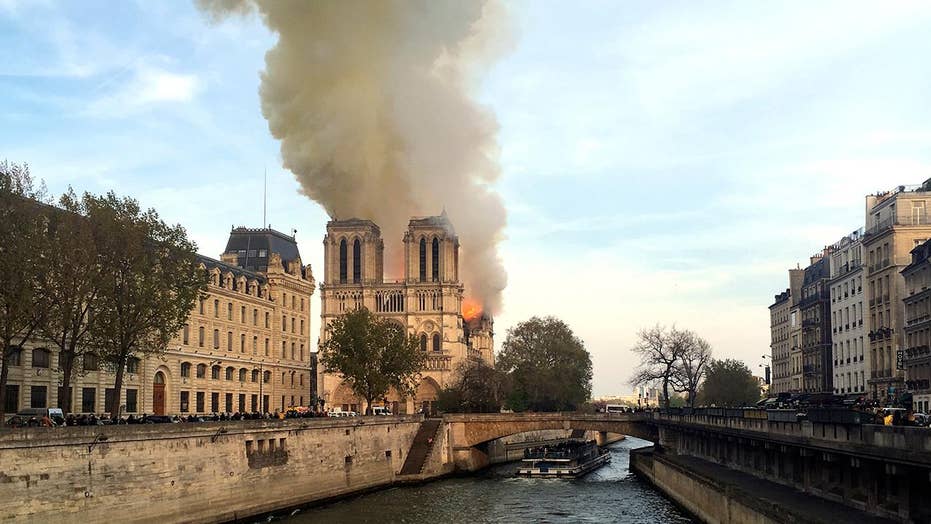 The top of the French landmark was still ablaze as the sun set Monday — and crews of firefighters continued working tirelessly to contain the massive flames while the fire spread to one of the church's historic rectangular towers.

"Everything is burning, nothing will remain from the frame," Notre Dame spokesman Andre Finot told French media outlets.

The peak of the church, one of the world's most famous tourist attractions, is undergoing a $6.8 million renovation project. It's unclear if the fire is related to the construction, though the fire brigade has confirmed it's a possibility.

MASSIVE FIRE BREAKS OUT IN NOTRE DAME CATHEDRAL IN PARIS

One man in the city called the view "unreal."

"I literally just visited Notre Dame two days ago. I’m currently looking at the smoke from a restaurant patio in Paris right now," he wrote on Twitter after news of the fire broke.

A woman who only identifies herself as "Sun" online tweeted a 15-second clip of the blaze, claiming she was around the scene when the fire first started.

"Omg it keeps getting bigger and bigger so fast, i'm leaving now but in case it catches up to the crowd um hi at least my last moments were in Paris," she wrote in a Twitter thread.

Another woman shared footage of the plumes of smoke that she could spot across the Seine River.

"This is just awful. #NotreDame," a man added, sharing multiple videos of the burning spire.

Another Twitter user said he could see the smoke from Villejuif, a suburb in Paris located more than four miles away from the city's center.

"So I’m [in] France right now and a friend of mine on discord hits me up saying the historical building, Notre Dame is on fire. At that moment I checked out my window and saw the flames. This is a sad day for France. Here’s a vid I tried to get a good angle," another wrote, sharing raw footage of the devastating scene.

"When the monument of your childhood goes up in smoke," one French woman captioned an Instagram post.

"Oh My! So devastating, I can remember the first time I saw this cathedral and each additional time, such a breathtaking structure both inside and out. I just hope no injuries!" one woman added, along with a photo of the structure burning from across the Seine.

French President Emmanuel Macron arrived at Notre Dame to survey the damage hours after the building was engulfed in flames.

Last week, 16 religious statues were removed from the peak for the first time in over a century to be taken for cleaning and fortunately escaped the blaze.