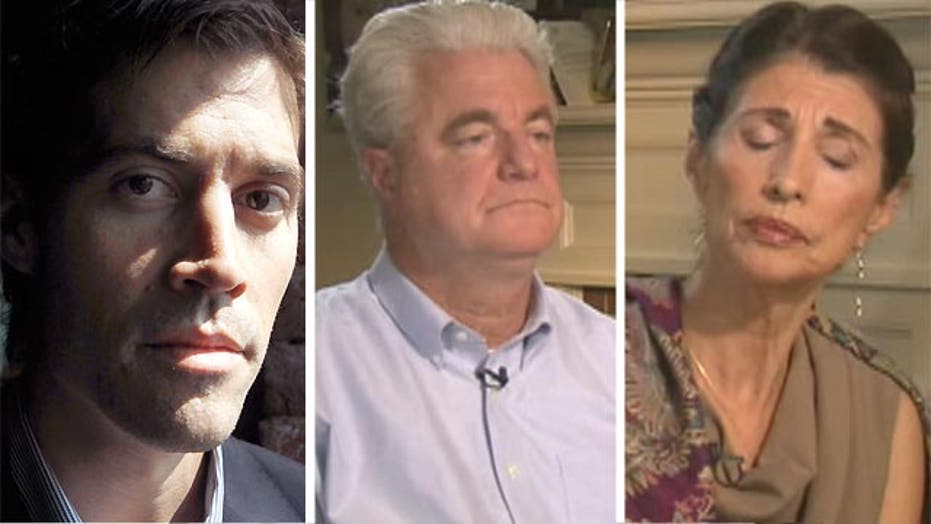 How James Foley's parents learned about his execution

Parents of first American journalist executed by ISIS reveal how they learned about his death, what they hope for with the James W. Foley Legacy Fund. #JamesFoley

The mother of murdered journalist James Foley told Fox News’ Greta Van Susteren Friday the family learned of her son’s death “by one journalist calling us and crying on the phone” and asking if they’d seen the news.

“Then we turned on the news,” Diane Foley said simply.

Speaking with John and Diane Foley at their New Hampshire home in an exclusive interview for “On the Record,” Van Susteren also asked if they had seen the video of their son’s beheading.

“Not all of it,” Diane Foley said, adding, “we don’t want to. That’s their propaganda. They want to frighten us…we don’t need to see it.

“We want to remember how Jim lived. He was a man of compassion, courage and fun, he had a joy…it was a horrific death for such a good person. It was the antithesis of his life, the way he died.”

The couple also announced announced the creation of the James W. Foley Legacy Fund to aid other families of American hostages and journalists reporting from war zones.

On Thursday, Foley’s brother Michael told Fox News the Obama administration threatened him when he tried to raise funds for his brother's release from ISIS -- the terrorist group that beheaded him.

"They were actually an impedance," Michael Foley told FNC’s Megyn Kelly of the U.S. government's role in rescuing his older brother, a photojournalist who was kidnapped by ISIS militants in northern Syria in 2012 and held captive for 21 months before he was executed by the terrorist group.

U.S. policy does not allow for government negotiations with terrorist organizations or ransom payments for Americans kidnapped by them. Foley, however, said the administration made it difficult for the family to privately raise funds on its own to secure his brother's release.

In the interview with Van Susteren, Foley's parents were less critical, although Diane Foley said she felt the government could have done more to save her son.

"The only response we got from the government was, 'Trust. Trust us, we're working on it,' " she said.

"As a frantic mother I did my best to trust … I did my best. I did best to make myself a pest so that they wouldn’t forget us. We didn't get the attention [from the government] until the end but it was too late."

Michael Foley, James' younger brother, was more forceful in his criticism of the administration.

"They got in our way," Foley told Fox News' Megyn Kelly in an exclusive interview. "That's what really bothers me to the core."

"I was specifically threatened by the Department of State about raising funds towards ransom demands for my brother," he said. "We were smart enough to look past it but it slowed us down. We lost a lot of time."

On Aug. 19, a video produced by ISIS militants was uploaded to YouTube titled, "A Message to America." Foley, an experienced war journalist who worked for Boston-based GlobalPost, is seen in the video in an unknown desert location kneeling in an orange shirt and pants -- similar to clothes worn by Guantanamo Bay detainees. After reading a statement denouncing the U.S. government and its recent air strikes in the region, Foley is executed.

The murderer, who speaks with a British accent, then threatens to kill U.S. journalist Steven Sotloff, who had also been abducted in Syria. On Sept. 2, a video was released of ISIS beheading Sotloff, who had worked for Time magazine as well as Christian Science Monitor and other media outlets.

In the days following Foley's execution, the White House said special operations troops were deployed to Syria months earlier on a secret mission to rescue U.S. hostages, including Foley, but were unsuccessful in finding them.

"Since his capture, we have been using every tool at our disposal to try to bring him home to his family and to gather any and all information we could get about his whereabouts, his condition and the threats he faced," White House spokeswoman Caitlin Hayden said last month.

While the U.S. and U.K. do not pay ransom for citizens kidnapped by terrorist groups, other countries, like France, have reportedly negotiated in secret for the release of hostages.

Didier François, a reporter with French radio Europe 1, was released by ISIS after months of captivity in April 2014. He later told reporters he shared a cell with Foley from September 2013 up until his release. France has denied reports that it paid $18 million for the release of François and three other journalists.

According to a GlobalPost spokesman, Foley's captors had demanded a ransom of about $135 million for his release.

While Foley's family expressed their criticism of the administration's handling of the case, his father, John, made clear that, "We don’t want to blame our government. They’re not the enemy. ISIS is the enemy."