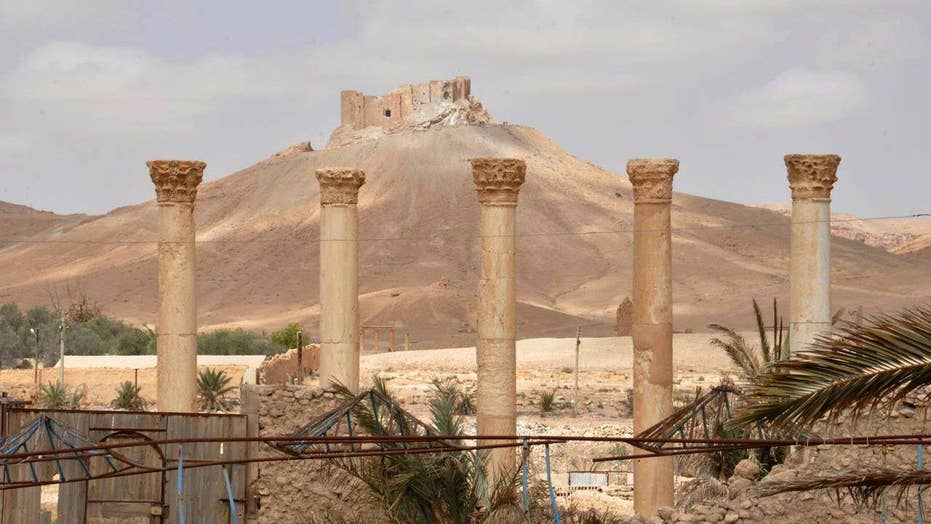 What recapture of Palmyra means for fight against ISIS

Defcon 3: J.D. Gordon breaks down victory in historic city and analyzes the role of Putin and Assad in Syria

Islamic State militants advanced toward the central Syrian city of Palmyra on Wednesday, threatening to besiege the world-famous ancient site several weeks after the government recaptured it from the extremists.

The offensive came as a cease-fire over the northern city of Aleppo ticked down to its final hours, threatening to plunge the divided metropolis back into violence. A rocket attack on a government-held neighborhood late in the afternoon killed at least two people.

Media allied with the IS group and other activists said the militants seized a strategically located but deserted rocket-launching site close to an air base less than 60 kilometers (40 miles) from Palmyra. For the government forces, the capture effectively severs a highway linking Palmyra to the government-controlled T-4 air base and the provincial capital Homs, threatening government supply routes.

The Britain-based Syrian Observatory for Human Rights and other activists confirmed the reported IS advance. The development comes after intense clashes with government troops near the air base, and a week after the extremist group advanced toward natural gas fields to the north.

Al-Bayan radio reported that IS militants took control of the deserted site, seized two government checkpoints guarding the air base and downed a military helicopter to the north of the base. The Observatory also reported the downing of the aircraft but said the fate of its crew remains unclear.

Wednesday's capture "helps in severing the supply routes of the (Syrian) army from T-4 base to Palmyra, and tightening the siege on the city," the IS-linked radio report said.

Syrian state media denied reports that the road between Homs and Palmyra was cut.

Syrian troops, with the help of Russian airstrikes, regained control of the world-famous ancient city in March, after IS had controlled it for nearly 10 months. During their rule, IS destroyed many of Palmyra's relics and displaced its residents.

Meanwhile, an airstrike on a medical point in IS-held territory north of the eastern city of Deir el-Zour killed at least seven people, among them a child, the Observatory reported. American, Russian, Syrian, and other air forces are known to conduct raids on the IS group in the area. It was unclear who was behind the attack on the village of Shaheil.

The IS advance on Palmyra comes despite a partial cease-fire with the mainstream opposition militias that was intended to allow the government and its international allies to focus their efforts on the extremist group and its rival Al-Qaida branch, the Nusra Front. That truce, brokered by the United States and Russia, broke down in the northern city of Aleppo.

Nearly 300 people were killed in less than two weeks, in strikes that also targeted hospitals and civilian areas.  Human Rights Watch quoted rescue workers as saying that in one airstrike on a hospital in a rebel-held area of Aleppo, 58 civilians were killed, including medical staff and many patients. On the other side, a government-area hospital was hit and at least 20 people were killed in shelling blamed on the rebels.

Last week, airstrikes hit a displaced people's camp in the northern Idlib province along the border with Turkey and killed 28 people. The Russian and Syrian government denied any role.

A partial cease-fire was restored, and has been extended twice. The latest cease-fire expires at midnight Wednesday.

But Syrian state media accused "terrorists" of breaching the truce earlier in the day, when a rocket landed on the government-held Seif al-Dawleh neighborhood killing two people, according the report. The Observatory said three people had died and at least 10 were injured. Government media refers to all factions of the armed opposition as terrorists.

In Geneva, the Commission of Inquiry on Syria, a four-person U.N. team of investigators that aims to identify possible war crimes and other violations, decried strikes on medical facilities in the Aleppo and at the Idlib camp for fleeing people.

The commission noted that the recent truce has "increasingly deteriorated" and said international humanitarian law requires combatants to distinguish between "lawful and unlawful targets."

It urged parties to the conflict and states seeking a peaceful resolution to "demand civilian protection measures be taken."