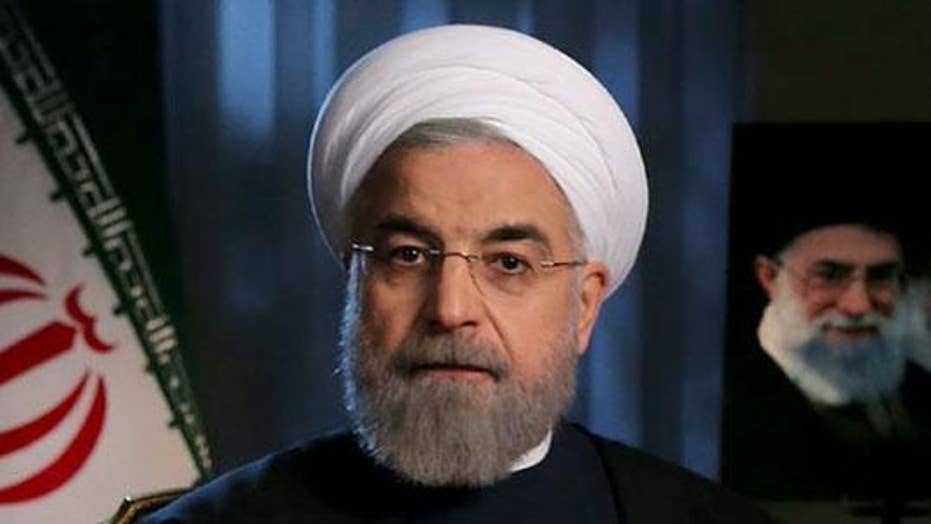 Rich Edson reports the Trump administration is accusing the Iranian regime of killing more than 1, 000 people during protests.

More than 1,000 people may have been killed by security forces in Iran amid recent protests, a senior state department official said Thursday, one day after authorities in the Islamic Republic acknowledged that demonstrators have been shot and killed in the unrest.

Brian Hook, the U.S. special envoy for Iran, told reporters at the State Department that American officials have seen a video of one incident in which the Iranian Revolutionary Guards Corps had mowed down at least 100 people with machine-gun fire. He said the U.S. had received and reviewed video of that incident in the city of Noshahr.

“In this one incident alone, the regime murdered as many as 100 Iranians and possibly more,” Hook told reporters

Amnesty International believes at least 208 people were killed in the protests and security force crackdown that followed. Other groups, such as the France-based National Council of Resistance of Iran, claim that 1,029 have been killed in protests across 189 cities.

Iran disputes Amnesty’s figures but so far has refused to release any nationwide casualty or arrest figures. Hook, who cited unspecified reports on Thursday and did not provide any evidence of the death toll, said Iranian forces may have killed upwards of 1,000 people in response to the protests.

“We have seen reports of many hundreds more killed in and around Tehran," he said. "And, as the truth is trickling out of Iran, it appears the regime could have murdered over 1,000 Iranian citizens since the protests began.” The dead include 13- and 14-year-old children, he said.

In this Nov. 20, 2019, file photo, people walk past buildings that were burned during recent protests, in Shahriar, Iran, some 25 miles southwest of the capital, Tehran. (AP Photo/Vahid Salemi, File)

Iran’s mission to the United Nations did not immediately respond to a request for comment by the Associated Press, and there was no immediate comment on state media in Iran.

On Wednesday, Iranian supreme leader Ayatollah Ali Khamenei, who has final say over all state matters in the Islamic Republic, said that those detained in recent gasoline price protests should be treated with “Islamic mercy."

The state-run IRNA news agency quoted Khamenei as responding to a report on the unrest from the country’s Supreme National Security Council.

"The faster these cases are considered, the better and those who are suspected of being close to any group should be dealt with in a way that is closer to Islamic mercy," Khamenei said, according to IRNA.

Amnesty International says at least 208 people in Iran have been killed amid protests over sharply rising gasoline prices and a subsequent crackdown by security forces. The country has yet to release any nationwide statistics about the unrest last month. (AP Photo/Ebrahim Noroozi, File)

The demonstrations began Nov. 15 after the government raised minimum gasoline prices by 50 percent to 15,000 Iranian rials per liter. Cheap gasoline is practically considered a birthright in Iran, home to the world’s fourth-largest crude oil reserves despite decades of economic woes, according to the Associated Press.

The country is also in the midst of widespread economic discontent in the wake of President Trump imposing crushing sanctions in May 2018 after unilaterally withdrawing the United States from the nuclear deal. That decision has seen Iran begin to break limits of the deal, as well as a series of attacks across the Mideast that America has blamed on Tehran.

The unrest that erupted last month was the bloodiest in Iran since the time of the Islamic Revolution. The 2009 Green Movement protests that followed a disputed presidential election drew millions to the streets but saw far less killing.

After the violence erupted last month, Khamenei claimed that acts such as setting a bank on fire was "what thugs do."

But in comments made on Wednesday, Khamenei appeared to soften his stance, saying that citizens killed in the protests “without playing any part in instigating them” should be considered martyrs and their families should receive government stipends. Those “killed in shootouts with security forces” also should have their backgrounds examined, he said.

Authorities should “console those families that have never had any criminal backgrounds,” IRNA said, paraphrasing Khamenei.

In addition to the hike in gas prices, Iranians have seen their savings chewed away by the rial’s collapse from 32,000 to $1 at the time of the 2015 nuclear accord to 127,000 to $1 today under the renewed U.S. sanctions. The cost of daily staples also has risen, making the removal of any government subsidy making life affordable for Iran’s people wildly unpopular.

The government of President Hassan Rouhani pushed for the gasoline-price hike, saying they’d use the money for a new support program for Iran’s poor.

However, after the unrest, Rouhani himself tried to describe himself as surprised by the timing of the implementation of the gasoline hike.