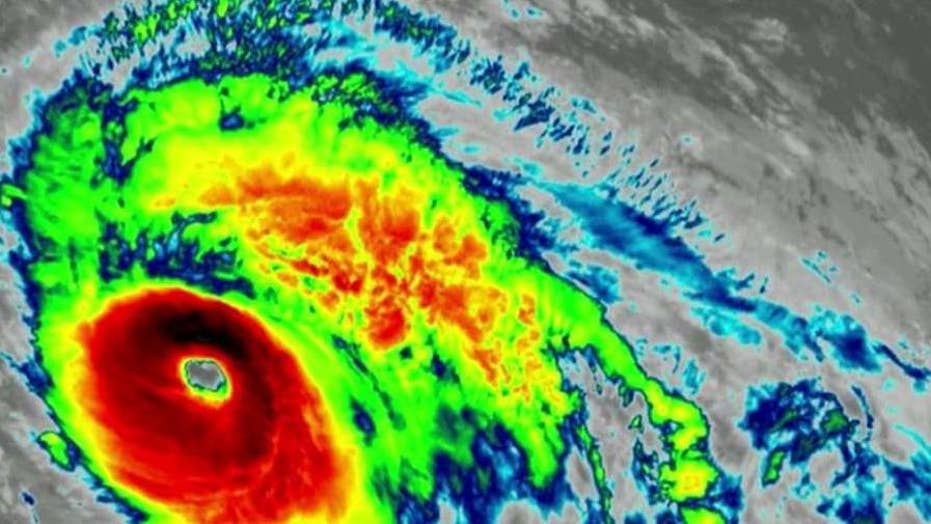 Hurricane Lorenzo lashed the Azores Islands with heavy rains, powerful winds and high waves Wednesday, before transitioning to a strong post-tropical system that is taking aim at Ireland and the United Kingdom for the end of the week.

The National Hurricane Center in Miami issued its last advisory on the storm at 11 a.m. as it transitioned to a post-tropical cyclone. It said the storm had maximum sustained winds of 80 mph and was located about 945 miles west-southwest of Cork, Ireland, as it moved northeast at 43 mph.

"Only slow weakening is forecast during the next day or so, and the system is expected to be a strong extratropical cyclone when it approaches Ireland Thursday afternoon and evening," forecasters said. "A faster rate of weakening is expected when the cyclone moves over Ireland and England."

HURRICANE LORENZO TO POUND THE AZORES WITH UP TO 70-FOOT WAVES, MORE BODIES FOUND FROM SUNKEN TUGBOAT

Hurricanes the size of Lorenzo are rare so far north and east in the Atlantic basin. Lorenzo is producing huge swells across the North Atlantic that were being felt along the eastern coasts of the United States and Canada, in the Bahamas, and in parts of western Europe.

Waves crash on a seafront road in Horta, in the Portuguese island of Faial, Wednesday, Oct. 2, 2019. (AP Photo/Joao Henriques)

In the Portuguese islands, the weather agency said the most affected islands in the Azores archipelago were Flores and Corvo, where weather stations reported gusts of up to 101 mph, which was lower than forecast as Lorenzo lost some power over cooler water.

Debris driven by wind and crashing waves lies on a seafront road in Horta, in the Portuguese island of Faial, Wednesday, Oct. 2, 2019. (AP Photo/Joao Henriques)

Portuguese Prime Minister Antonio Costa said he had spoken to Azores officials at daybreak and the hurricane risk had peaked without major incident. The Category 2 hurricane brought down trees and power lines as it skirted to the west of the island chain.

“Fortunately, everything indicates that things have not turned out as badly as we feared,” Costa told reporters in Lisbon.

Debris blocks a road in the seafront village of Feteira, outside Horta, in the Portuguese island of Faial, Wednesday, Oct. 2, 2019. (AP Photo/Joao Henriques)

Azores Civil Protection Agency chief Carlos Neves said 39 people were safely evacuated and no injuries were reported. He said the main port on the island of Flores had suffered “grave damage” as part of the dock, the port’s building and some cargo containers had been “swallowed” by the sea, according to the Associated Press.

Don Marks, from Massachusetts in the US, center, and his wife Celeste walk among debris on their way to look at their wrecked seafront house in the village of Feteira, outside Horta, in the Portuguese island of Faial, Wednesday, Oct. 2, 2019. (AP Photo/Joao Henriques)

Around 250,000 people live on the Azores’ nine volcanic islands and the archipelago is a popular tourist destination, famed for its lakes, mountains and volcanic craters. School classes were canceled and government offices were closed as people were told to remain indoors Wednesday. Azores airline SATA canceled all flights to the archipelago, and some islands closed their ports.

Forecasters said Lorenzo will “likely be a fairly vigorous cyclone” when it reaches Ireland late Thursday.

The U.K. Met Office forecast “very strong winds and heavy rain” for western areas of the country on Thursday and Friday.

Lorenzo previously was a Category 5 hurricane, the strongest storm ever observed so far north and east in the Atlantic basin. The rough seas generated by the storm have been blamed for sinking a tugboat that was carrying 14 crew members about 1,200 nautical miles off Martinique.

The Bourbon Rhode, a tug supply vessel built in 2006, was about 60 nautical miles east of the eye from Hurricane Lorenzo -- then a Category 4 storm -- when the crew reported trouble on Thursday. The three crew members, who were rescued by a commercial vessel that was in the area to assist rescue teams, were under medical observation.

On Wednesday, the company said the body of a fourth crew member had been discovered the previous day and transferred to the French Navy’s "Ventôse" frigate.

"On behalf of BOURBON, I would like to express our condolences to the family and friends of the deceased seafarer," Bourbon CEO Gaël Bodénès said in a statement. "We are at their side to accompany them through this terrible ordeal. Despite significant search resources for the rescue of the crew, the fate of the missing is an ever-increasing source of anxiety for the families."

A fishing boat endures heavy rain and strong winds moored at the port in Horta, in the Portuguese island of Faial, Wednesday, Oct. 2, 2019. (AP Photo/Joao Henriques)

Bodénès, who described the search and rescue effort as "unprecedented," expressed gratitude to all those who have been involved in the work to find the remaining crew members. Since operations started on Sept. 26, 10 commercial vessels have been mobilized in the area and several aircraft -- including a French Navy Falcon 50, U.S. Coast Guard C-130 Hercules -- have joined the French Navy to search for the missing sailors.

Hurricanes the size of Lorenzo are rare so far north and east in the Atlantic basin. Lorenzo is producing huge swells across the North Atlantic as it moves northeast toward Ireland and the United Kingdom that were being felt along the eastern coasts of the United States and Canada, in the Bahamas, and in parts of western Europe.