Buildings have been swept away by the wind and submerged by flooding, says Major Clarence Ingram, divisional commander of the Bahamas division for the Salvation Army.

After battering the Bahamas for more than a day and a half, Hurricane Dorian finally began to move away from the islands on Tuesday as the scope of the devastation began to emerge.

The National Hurricane Center said that as of 6 p.m. ET the storm continued to produce maximum sustained winds of 110 mph and "life-threatening" storm surge. The storm was located about 125 miles east of Melbourne, Fla., inching forward at 6 mph northwest.

Dorian's punishing winds and torrential rain have battered the islands of Abaco and Grand Bahama, which have a combined population of about 70,000 and are known for their marinas, golf courses and all-inclusive resorts.

The Grand Bahama airport was under 6 feet of water and at least five deaths were reported.

"The amount of flooding, there's places that the water has come in 20 feet higher than normal so that buildings are completely underwater," Ingram told Fox News. "There are buildings completely swept away by the wind. It's just incredible, the amount of damage that's happened over there, of course, trees and cars and all the other stuff blown away."

Julia Aylen wades through waist deep water carrying her pet dogs as she is rescued from her flooded home during Hurricane Dorian in Freeport, Bahamas, Tuesday, Sept. 3, 2019. (AP Photo/Tim Aylen)

The United Nations and the International Red Cross began mobilizing to deal with the unfolding humanitarian crisis in the wake of the most powerful hurricane on record ever to hit the Bahamas. 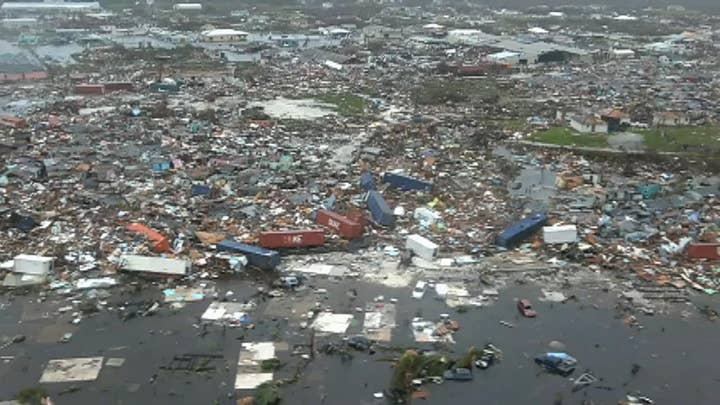 A photo released by the Coast Guard shows flooding on the runway of the Leonard M. Thompson International Airport in the Bahamas.

Another image showed boats littered the area around a marina in the Bahamas after they were tossed around by Hurricane Dorian.

Bahamian officials have said they received a "tremendous" number of calls from people in flooded homes, and desperate callers trying to find loved ones left messages with local radio stations.

Julia Aylen wades through waist deep water carrying her pet dog as she is rescued from her flooded home during Hurricane Dorian in Freeport, Bahamas, Tuesday, Sept. 3, 2019. (AP Photo/Tim Aylen)

One station said it got reports of a 5-month-old baby stranded on a roof and a woman with six grandchildren who cut a hole in a roof to escape rising floodwaters. At least two designated storm shelters flooded. The U.S. Coast Guard airlifted at least 21 people injured on Abaco. Rescuers also used jet skis to reach some people.

"We will confirm what the real situation is on the ground," Health Minister Duane Sands told the Associated Press. "We are hoping and praying that the loss of life is limited."

Red Cross spokesman Matthew Cochrane said more than 13,000 houses, or about 45 percent of the homes in Grand Bahama and Abaco, were believed to have been severely damaged or destroyed. U.N. officials said more than 60,000 people on the hard-hit islands will need food, and the Red Cross said some 62,000 will need clean drinking water.

The Red Cross authorized a half-million dollars for the first wave of disaster relief, Cochrane said.