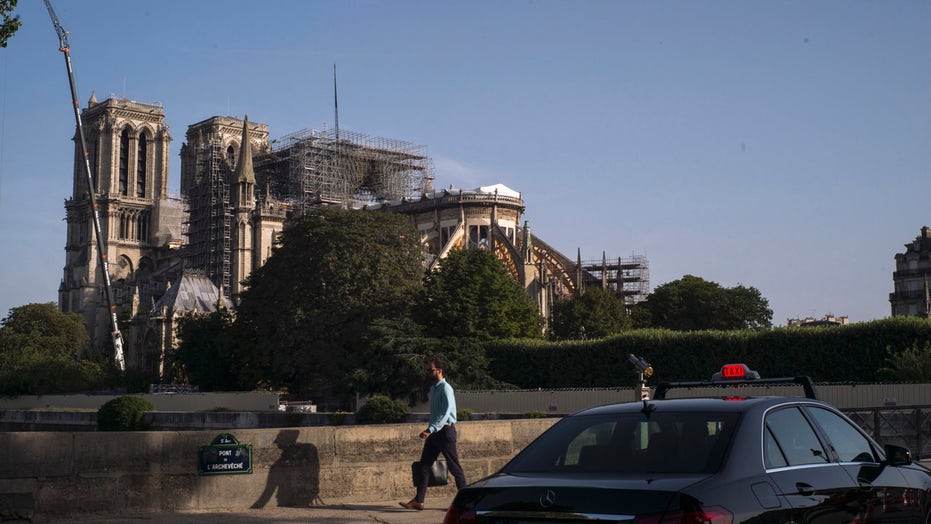 A searing heat wave spreading across Europe that is already breaking all-time records is threatening to hamper repair efforts at the fire-ravaged Notre Dame Cathedral, where the chief architect warned Wednesday portions of the vaulted ceilings may collapse.

Belgium measured its highest temperature since records were first kept in 1833 on Wednesday, with a recording of 102.3 Fahrenheit in Kleine Brogel. The Royal Meteorological Institute said that it was "the highest ever Belgian temperature."

Paris and other parts of France could see temperatures exceeding 104 Fahrenheit on Thursday along with Germany, Belgium, Netherlands, Luxembourg and Switzerland.

Paris is likely to break its all-time hottest record mark of 104.7 Fahrenheit, according to weather officials.

The heat is putting pressure on authorities to help protect the vulnerable, but it is also raising alarm for those working repairing the fire-ravaged Notre Dame Cathedral.

Pedestrians walk alongside the Seine River with fire-damaged sections of the Notre Dame Cathedral in view in the background, in Paris, France, Wednesday, July 24, 2019. (AP Photo/Rafael Yaghobzadeh)

The cathedral’s chief architect, Philippe Villeneuve, told reporters Wednesday he is afraid the heat wave could leave the vaulted ceilings at risk of collapse.

Villeneuve said the stone walls are still saturated with water sprayed by firefighters during the April 15 blaze, and that they could dry too fast amid the record temperatures expected in Paris this week. He said so far the masonry is stable but the structure remains fragile.

Greg Palkot reports from Paris on the aftermath of the fire.

“What I fear is that the joints or the masonry, as they dry, lose their coherence, their cohesion, and their structural qualities and that all of sudden, the vault gives way," he said.

Dozens of sensors dotted around the 12th-century monument have shown no indication that it's deteriorating, but Villeneuve said the vaulted ceiling “could very well” collapse, according to Reuters. While experts have had access to the bell towers and other parts of the cathedral, Villeneuve said they have not been able to access the ceiling from above or below.

“I am very worried about the heat wave,” he said.

Forecasters in the U.K meanwhile warned Thursday could also be the hottest day ever recorded, with temperatures likely to reach 102 Fahrenheit somewhere in southern and eastern England.

The current all-time record is 101.2 Fahrenheit logged in Faversham in August 2013, according to Sky News.

Authorities are urging people to stay out of the sun, drink plenty of water and check on older people living alone. Companies are also being advised to allow workers flexible start times to avoid the rush hour, relaxing dress codes, and keeping buildings cool.

Two men cool off in a public fountain near the Atomium during a summer hot day in Brussels, Wednesday, July 24, 2019. (AP Photo/Francisco Seco)

Across London, authorities started handing out water and sunscreen to homeless people and opened day centers for them to rest and shower. In the Lewisham district of the British capital, garbage collectors will start working as early as 5 a.m. in the morning to beat the heat.

The second heat wave this summer is expected to be a relatively short event fueled by hot dry air from northern Africa, but authorities are taking precautions to protect vulnerable residents. Air conditioning is not common at homes, offices, schools or hospitals in European cities.

The weather is also aggravating droughts since it hasn't rained much in many parts of Europe this summer. The combination of heat, wind and possible lightning from thunderstorms also increases the risk of wildfires.

A water cannon of the German police waters trees in Wuppertal, western Germany, Wednesday, July 24, 2019. Hot temperatures are expected all over Europe during the next days. (Claudia Otte/dpa via AP)

In the Netherlands, local authorities have taken an unusual precaution — with trucks scattering salt on the roads like they usually do in the winter. The salt spreaders are usually used to prevent ice forming on Dutch roads in the cold, but Arnhem municipality started using them to cool off asphalt that is baking.

The city says in a statement that the salt "attracts moisture from the air and cools the asphalt." It also prevents asphalt from becoming sticky.

The heat wave will end in a few days. On the weekend, temperatures are expected to fall. However, quite often the end of a heat wave brings storms, including lightning and heavy flooding.