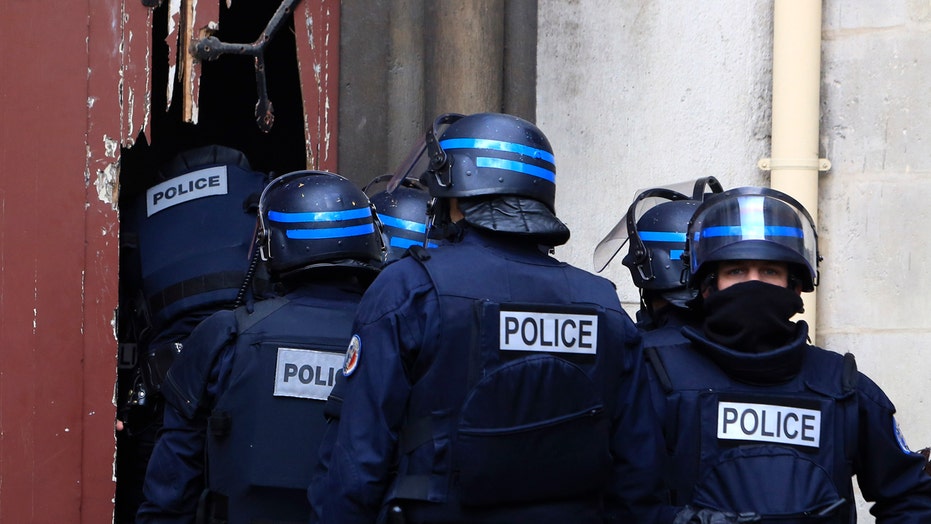 French investigators would not publicly identify one of two people killed in a terror raid north of Paris early Wednesday — the other being a woman who detonated a suicide vest — but The Washington Post, citing two senior European intelligence officials, reported that the suspected mastermind of Friday's terror attacks was dead.

The man believed to be the architect of the massacre, 27-year-old Belgian Islamic State militant Abdelhamid Abaaoud, had mocked Western authorities for his ability to slip out of their sights, into and out of Syria. Investigators traced him to an apartment just north of Paris in suburban Saint-Denis by tracking phone conversations and piecing together surveillance images and witness accounts, according to Paris Prosecutor Francois Molins and French Interior Minister Bernard Cazenueve.

The Post reports its intelligence sources spoke on condition of anonymity.

Police confirm a woman in a suicide vest blew herself up during the raid, severely damaging the building's structural integrity. She apparently was Abaaoud's cousin, in her twenties and from the northwestern suburb of Clichy La Garenne, French media reported.

Molins said a terror cell linked to the Paris massacre had been operating out of that apartment, and was ready to act again. He said at one point, police fired some 5,000 rounds during "uninterrupted" shooting that lasted nearly an hour. A reinforced door to the apartment initially blocked the heavily-armed policy squads, he added.

In addition, the manhunt for Salah Abdeslam, an ISIS gunman believed to have taken part in Friday's attacks, continued Wednesday. Molins said neither Abaaoud nor Abdeslam were among the seven men arrested in Wednesday's raid.

Abaaoud was believed to be in Syria after a January police raid in Belgium, but bragged in ISIS propaganda of his ability to move back and forth between Europe and Syria undetected.

One of the men arrested said he lived in the apartment, let some people stay there as a favor, and "didn't know they're terrorists." Jawad Bendaoud added that someone had "asked me to put some people up for two, three days, and I provided this service."

He said, "I don't know where they come from ... If I would have known, I wouldn't have let them stay."

Bendaoud spoke to BFMTV as police led him away. He had been sentenced to eight years in prison for killing his best friend in a 2006 fight.

French police confirmed that five officers suffered minor injuries in the raid. A police dog was also killed when the female suicide bomber blew herself up.

The apartment is just over a mile from the Stade de France stadium, which was targeted by three suicide bombers during Friday's attacks. Riot police cleared people from the streets, pointing guns at curious locals to move them off the roads.

One person who lived near the site of the siege posted a 10-second video of the scene on her street. A series of bangs sounding like automatic weapons fire could be heard. The message accompanying the tweet translates to "It's an intervention by police ... street closed, officers, etc."

French authorities sent out a bulletin to police across Europe asking them to watch out for a Citroen Xsara car that could be carrying Salah Abdeslam, a Spanish security official told AP. One of his brothers, Brahim, blew himself up in Paris.

In all, overnight raids across France led to 25 arrests and the seizure of 34 weapons. The new tally was announced Wednesday by the Interior Ministry.

The weapons seized since Friday include 11 military-style firearms, 33 rifles and 31 handguns, according to police.

Seven attackers died in Friday's gun-and-bomb rampage through Paris that killed 129 and wounded over 350 others. Police had said before the raids that they were hunting for two fugitives suspected of taking part as well as any accomplices. That would bring the number of attackers to at least nine.

And French president Francois Hollande said any places where people are "glorifying" terrorism will be shut down. The bill to extend France's state of emergency for three months includes a measure that enables authorities to close "any association or gathering" -- which notably includes mosques and community groups -- that would encourage people to carry out terrorist acts.

Speaking on French television Wednesday, Hollande said "we are at war" with ISIS. He called for a "large coalition" working together against Islamic State militants to destroy a group that threatens the whole world and "commits massacres" in the Mideast.

Hollande told lawmakers, “I know you have at heart the willingness to undertake this task.” He added that the French aircraft carrier Charles de Gaulle just left to help French military operations in Syria against ISIS.