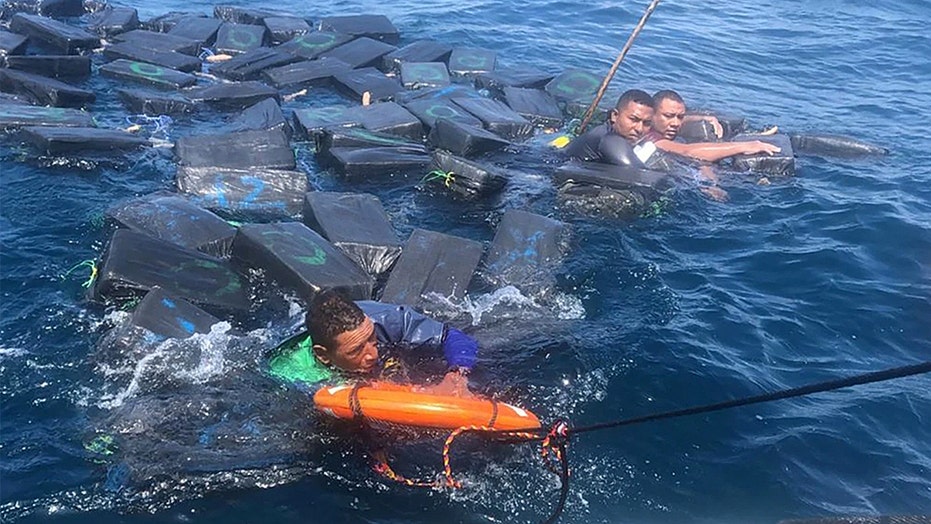 When their boat sank off the coast of Colombia on Sunday, three suspected drug smugglers survived out in the open waters by clinging to the only thing that was floating: their product.

The Colombian Navy said in a news release the trio was found adrift on high seas about 30 nautical miles off the town of Tumaco, floating on sacks of different sizes that were similar to those used by drug traffickers.

"The Coast Guard arrived and these three people were floating on a material that by its characteristics resembled drugs," Capt. Jorge Maldonado of Colombia's Task Force Against Drug Trafficking told Agence France-Presse.

TRUMP'S DRUG CZAR SAYS US URGING CHINA TO CRACK DOWN ON FENTANYL, OTHER DANGEROUS DRUGS

The men were rescued along with the sacks and brought to shore, where it was revealed the packages tested positive for 1.2 tons of cocaine hydrochloride.

Maldonado told AFP the men were on a boat that was hit by a wave and capsized.

The trio had been out in the shark-infested waters of the Pacific Ocean for at least three hours before they were spotted by the Tumaco Coast Guard Unit patrolling the area. By the time they were eventually picked up, the men had been in the water for about seven hours, according to Maldonado.

Officials released a photo of the three men surrounded by dozens of bricks.

All three, who were reported to be in good condition, have been charged by Colombian prosecutors with drug trafficking and manufacturing narcotics.

A search is continuing for a fourth man who was reported to be on the boat when it capsized, according to the Navy.

Tumaco is one of the main ports for drugs exiting Colombia bound for Central America and the U.S., according to AFP.