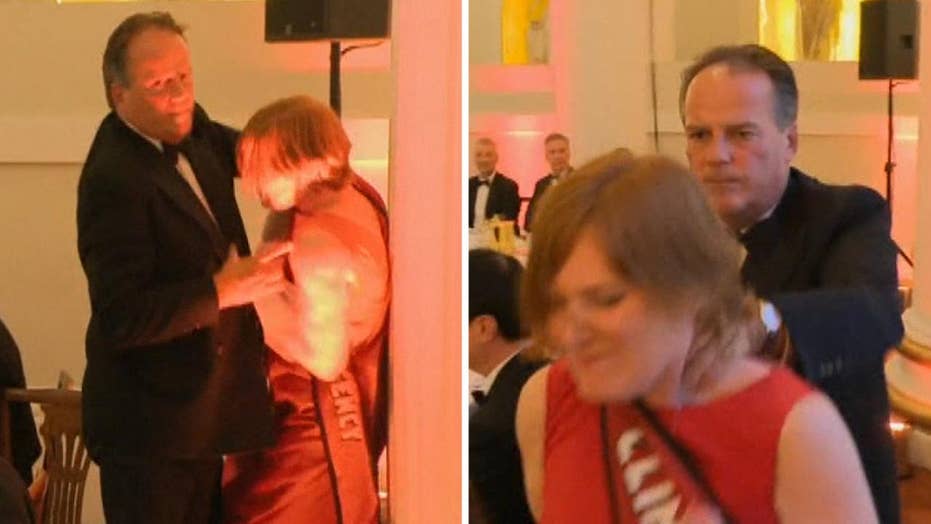 A British lawmaker was suspended Friday by Prime Minister Theresa May’s office after a video appeared to show him violently removing a protester from an event the previous night.

BORIS JOHNSON LAUNCHES BID TO SUCCEED THERESA MAY, PROMISES NOT TO ‘KICK THE CAN’ ON BREXIT

Video from the black-tie event showed the female protester walking toward Hammond. At that point Field stopped her by shoving her into a pillar and forcibly turning her around. He then placed his hand firmly on the back of her neck and led her out of the room.

The demonstration comes after climate change activists disrupted life and travel in the British capital in April, bringing parts of London to a standstill as they demanded net carbon emissions be reduced to zero by 2025.

In a statement to ITV, Field said he reacted “instinctively”  to what he called “a major security breach” after thinking that the protester could have been armed.

“In the confusion, many guests understandably felt threatened and when one protester rushed past me towards the top table, I instinctively reacted. There was no security present and I was for a split-second genuinely worried she might have been armed.”

“I deeply regret this episode and unreservedly apologise to the lady concerned for grabbing her but in the current climate I felt the need to act decisively to close down the threat to the safety of those present.”

Field’s suspension came after he publicly referred to himself to the Cabinet Office, which is officially investigating the incident along with the City of London Police and the Conservative party.