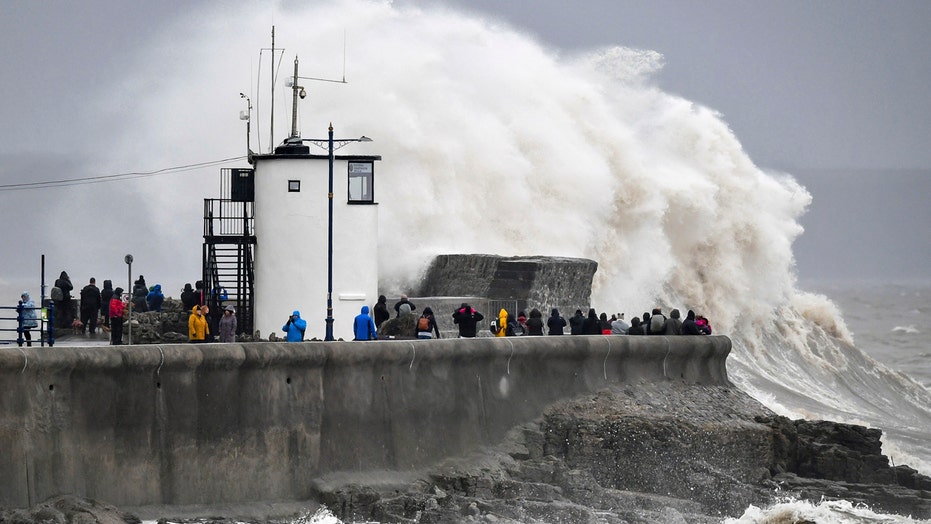 An explosive winter storm roared across Britain on Sunday, packing high winds and heavy rain that prompted a record number of flood warnings in England.

The weather service issued a rare "red warning" for life-threatening flooding in that region. Numerous rescues were reported throughout the area.

The storm was dubbed a "bomb cyclone" after rapidly intensifying near Iceland Friday before slamming Britain over the weekend.

Bomb cyclones drop some 24 millibars (or atmospheric pressure) over a 24-hour span, according to the National Oceanic and Atmospheric Administration. A typical range in millibars is around 10 to 15.

The National Weather Service Ocean Prediction Center said Storm Dennis deepened by 40 millibars in 24 hours, becoming one of the five strongest non-tropical cyclones on record in the North Atlantic.

As the storm system punished the U.K., flood warnings were in place Sunday from northern Scotland to southwest England.

John Curtin, director of flood and coastal risk management at the Environment Agency, tweeted Sunday that there were 594 flood warnings and alerts in effect in England -- more "than any other day on record."

That number reached 600 later in the day, Sky News reported.

The fourth named storm of Europe's winter season has already been blamed for the deaths of two men, who were pulled Saturday from the water in separate searches off England's southeastern coast. Another man died Sunday after falling into the River Tawe in south Wales, according to police.

torm Dennis roared across Britain on Sunday, lashing towns and cities with high winds and dumping so much rain that authorities urged residents to protect themselves from flooding. (Ben Birchall/PA via AP)

Wales appeared to be bearing the brunt of the two-day storm after a month's amount of rain fell in just 48 hours. Major incidents were declared by emergency services in south Wales and parts of England as police and firefighters worked to rescue people trapped after rivers burst their banks, Reuters reported.

An ambulance, left, and a vehicle are submerged after flooding in Nantgarw, Wales, Sunday, Feb. 16, 2020. (Ben Birchall/PA via AP)

“Agencies are continuing to deal with multiple floods and landslides, and have been required to evacuate residents from houses,” South Wales Police said in a statement.“Some communities have been cutoff as a result, but emergency service workers are working tirelessly to put measures in place to ensure the safety of residents."

The Met Office said the highest wind gust recorded was 91 mph at Aberdaron in north Wales on Saturday. A total of 6.1 inches of rain fell at Crai Reservoir in the Welsh county of Powys over 48 hours.

A member of the public is rescued after flooding in Nantgarw, Wales, Sunday, Feb. 16, 2020. (Ben Birchall/PA via AP)

Flood warnings could remain in place for a while since much of Britain is still saturated from last week's Storm Ciara, which left eight people dead across Europe.

“Whilst the heaviest rain has cleared from Northern Ireland and Scotland, England and Wales will continue to see heavy rain on Sunday, with a risk of severe flooding in places,'' said Andy Page, the Met Office's chief meteorologist.

Hundreds of flights were canceled due to high winds, while train service was disrupted by flooding, affecting tens of thousands of passengers as British families leave for the mid-winter school break.

People watch waves and rough seas pound against the harbor wall at Porthcawl in Wales, as Storm Dennis sweeps across the country, Saturday Feb. 15, 2020. (Ben Birchall/PA via AP)

On Saturday, about 75 British army personnel and 70 reservists were deployed to communities in the flooded Calder Valley region of West Yorkshire, constructing flood barriers and repairing damaged flood defenses.