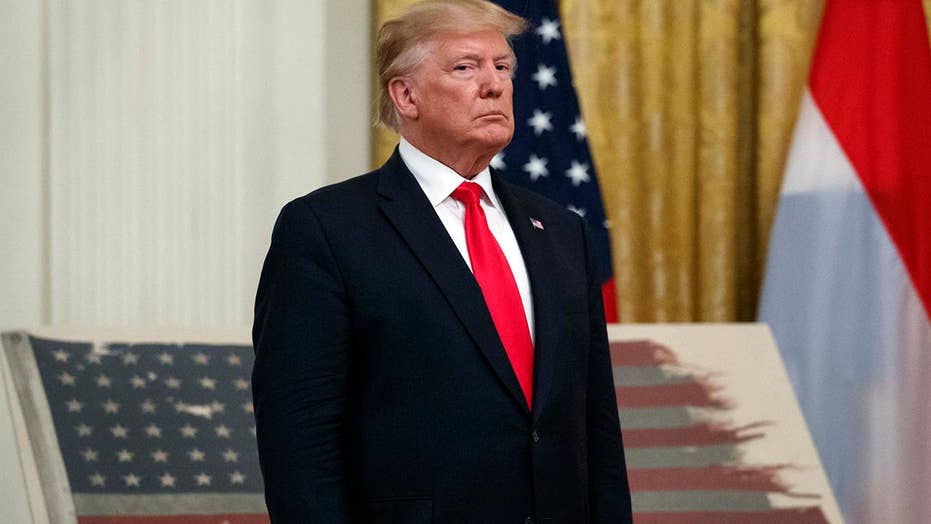 An American flag that flew on the leading ship invading Utah Beach was presented to President Trump in appreciation for the liberation of Europe in World War II; insight from Dutch art collector Bert Kreuk and U.S. Ambassador to the Netherlands Pete Hoekstra.

More than 20 American service members who were killed in a bloody World War II battle are finally back on U.S. soil – and are one step closer to getting the burials they rightfully deserve.

An Air Force plane carrying the remains of 22 who died during the Battle of Tarawa in 1943 – which took place on and around the remote island of Betio in the Pacific – landed Wednesday at Joint Base Pearl Harbor-Hickam in Hawaii. The caskets containing the remains, which were draped in American flags, were then carried off the aircraft by Marines as part of a ceremony.

“We welcome home more than 20 American servicemen still unaccounted for from the battle of Tarawa during World War II," Acting Defense Secretary Richard V. Spencer said. "We do not forget those who gave the ultimate sacrifice, and it is our duty and obligation to return our missing home to their families and the nation.”

Service members and guests stand as "Taps" is played over transfer cases carrying the remains of unidentified service members lost in the Battle of Tarawa during World War II. (AP)

Forensic archaeologists from the Defense POW/MIA Accounting Agency (DPAA) are now working to identify the remains and notify the next of kin, the Defense Department says. They are believed to belong to members of the 6th Marine Regiment who died during the last day of the 76-hour battle, the Associated Press reports.

GRAVES OF MORE THAN 30 US MARINES, SAILORS FROM WWII DISCOVERED ON REMOTE ISLAND

The remains were found in March by History Flight, a nonprofit group that has helped bring home 272 individuals from the battle site since 2015.

“Over several days of intense fighting at Tarawa, approximately 1,000 Marines and Sailors were killed and more than 2,000 were wounded, while the Japanese were virtually annihilated,” the DPAA says.

“Servicemen killed in action were buried where they fell, or placed in large trench burials constructed during and after the battle,” it added. “These graves were typically marked with improvised markers, such as crosses made from sticks, or an up-turned rifle.”

U.S. Marines carry transfer cases holding the remains of unidentified service members lost in the Battle of Tarawa during World War II, during what is known as an honorable carry conducted by the Defense POW/MIA Accounting Agency (DPAA), in a hangar at Joint Base Pearl Harbor-Hickam in Hawaii. (AP)

Around 3,000 Japanese soldiers and 1,000 Korean laborers were killed during the battle and their remains, the DPAA says, have sometimes been found comingled with those of Americans.

As of today, more than 72,000 Americans who were involved in World War II remain unaccounted for, according to the Defense Department.