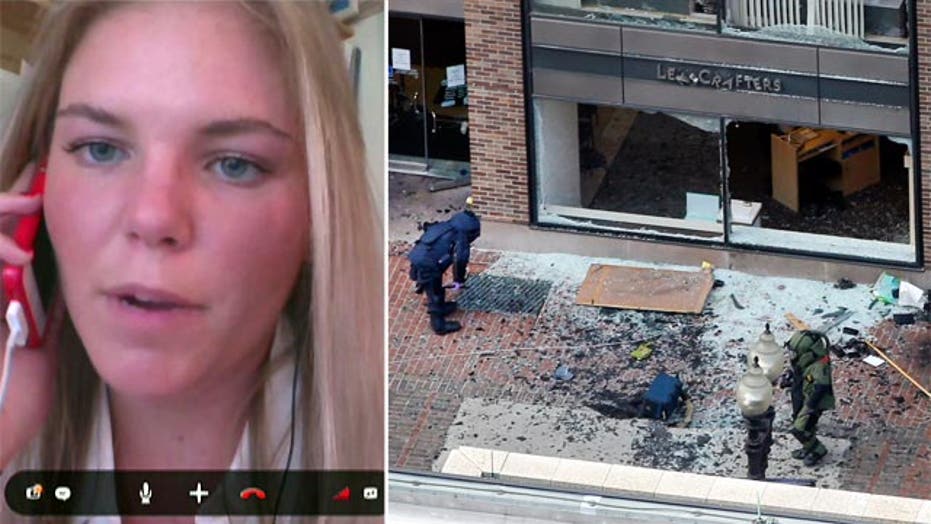 Thousands of runners and spectators were clustered in the area near the finish line of Monday’s Boston Marathon when two bombs exploded, killing three, injuring 176 and bringing anguished pandemonium to the city’s seminal event. Many spoke to the media at the scene, their stories conveying disbelief, fear, heroism and hope.

Here are some of their observations:

Vera Papisov was on a rooftop a few blocks away from the finish line when the first bomb went off. “It was just really scary and no one really knew what we were supposed to be doing,” the Boston native and student at Boston University told FoxNews.com, adding that she relied on Twitter for updates. “It felt everyone else knew what was happening except the people that were there.”


"When the bombs exploded, runners and spectators froze, unsure of what to do,” Brighid Wall, 35, of Duxbury, told The Associated Press. Her husband threw their children to the ground, and he and another man shielded them. “Don't get up, don't get up,” her husband shouted. After a minute or so without another explosion, they ran to a Starbucks and out the back door through an alley. Around them, the windows of the bars and restaurants were blown out.


“We started grabbing tourniquets and started tying legs. A lot of people amputated. ... At least 25 to 30 people have at least one leg missing, or an ankle missing, or two legs missing."

- Roupen Bastajian, a state trooper from Smithfield, R.I., who had just finished the race when he heard the explosions. (AP).


“This is something I've never seen in my 25 years here ... this amount of carnage in the civilian population. This is what we expect from war.”


“They just started bringing people in with no limbs.”

- Tim Davey of Richmond, Va., who was with his wife, Lisa, and children near a medical tent that had been set up to care for fatigued runners when the injured began arriving. (AP).


“I put my car key in my pocket, so I got home. There is no way to understand it yet. Sad that someone had to ruin what should have been such a beautiful day for the area.”


“For something like this to happen on a day so dear to Bostonians, it really cuts into who we are.” “

- Dave Wedge, of the Boston Herald, to Fox News.


“I just finished the race, and I went to hotel which was where I was to meet family and walked into the lobby of the hotel, and the first blast went off. I felt right away it was malicious, I could tell it was a bomb.”

“I was at an office overlooking the finish line. I heard an explosion, felt the blast. Heard a secondary, went down the stairs. I saw severed limbs, blood near the streets. Looks like a scene in Tel Aviv or Baghdad.


“I was pushing very hard to [finish in] under four hours. This is relevant because of the timing. I was having severe cramping, I limped across the line. I thought the significance was just breaking four hours. We were all picking up medals and congratulating each other, but then all of a sudden ‘kaboom!’


“I looked over to my wife, and I saw that her lower leg was hit by something; some shrapnel had hit her leg. I’m freaking out; I start wrapping her leg up. She inspected me to make sure I wasn’t hit or anything. I saw there was another lady who collapsed because her leg was hit.”


“I saw people crying - runners and volunteers and family members. Police began clearing the area. I saw people turned away, pleading with officials to get through so they could see their family members. I saw two people in civilian clothes carrying a woman, who was not wearing running gear, with one arm over each shoulder and one leg in each arm. Blood was gushing from her leg. A Boston police officer went by, pushed in a wheelchair.”