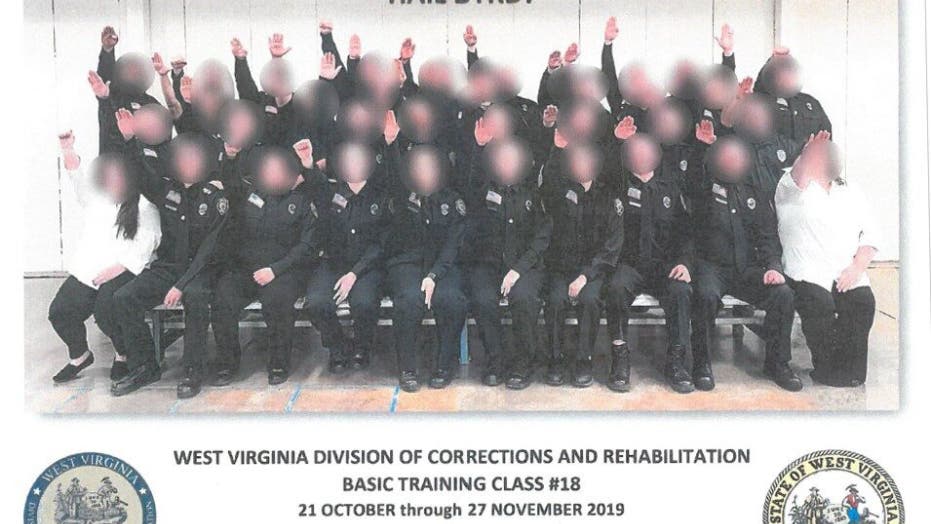 West Virginia Gov. Jim Justice on Monday approved the termination of dozens of Corrections Academy trainees seen in a photograph appearing to give a Nazi salute.

The photograph, released publicly earlier this month by the West Virginia Department of Military Affairs and Public Safety, showed more than 30 trainees from Basic Training Class 18 with their arms raised in a salute. The caption “Hail Byrd!” – a reference to the trainees’ instructor – is visible above the group.

Multiple people have been either fired or suspended in connection with a photo that appeared to show corrections trainees giving a Nazi salute.   (West Virginia Department of Military Affairs and Public Safety)

Before the image was released, Jeff Sandy, the agency’s secretary, had written a memo in which he derided the image as “distasteful, hurtful, disturbing, highly insensitive, and completely inappropriate.”

He said the image “betrays the professionalism I have seen time and time again displayed and practiced by our brave correctional employees.”

After the photo was made public, two training instructors and one cadet were fired, while 34 other employees, including the trainees in the photo, were suspended without pay. Now, at the recommendation of Sandy, Justice has approved all trainees who participated in the Nazi-like salute be fired.

Justice also approved for the termination of an Academy staff member who did not report the photo, and the suspension without pay of four instructors who had reportedly seen the photo but did not report its content.

“As I said from the beginning, I condemn the photo of Basic Training Class 18 in the strongest possible terms,” Justice wrote in a statement released by his office. “I also said that this act needed to result in real consequences — terminations and dismissals. This kind of behavior will not be tolerated on my watch in any agency of State government.”