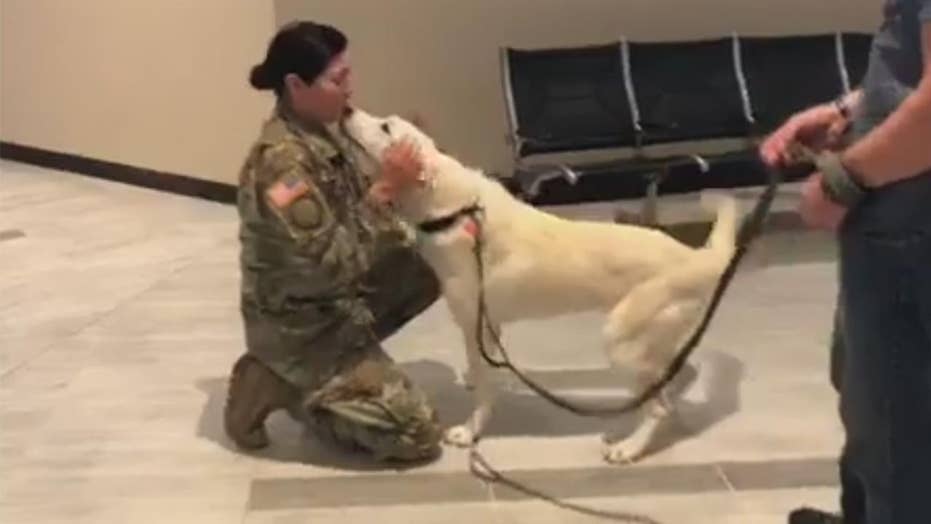 A Florida soldier has reunited with a stray dog she rescued while stationed in Iraq.

U.S. Army Reserve Sgt. Tracy McKithern was stationed in Kurdistan Training Coordination Center as a combat photographer when she laid her eyes on Erby, a small, dirty white stray pup who looked hungry.

It was love at first sight.

McKithern and the other soldiers stationed at the multinational military organization near Erbil started caring for the pup, giving her the name Erby Kasima – after Erbil, the largest city in northern Iraq, and for the Arabic name meaning “beauty and elegance.”

“She loved everyone,” the soldier told FOX13. “She is the sweetest little soul. She came up to me immediately, probably hungry, but gentle. I think she was looking for love more than anything else.”

McKithern was stationed in Iraq from April 2017 to January 2018 and every time coalition soldiers would go on convoys – with McKithern documenting the missions – Erby would eagerly await their return.

“She ran up to our convoy every day,” she recalled. “She was so tiny she would fall and trip all over herself to get to us.”

As McKithern’s date to return stateside approached, she wondered about the possibility of bringing Erby back to the U.S. with her.

“One night I posted a pic of us on Facebook, with the caption that read something like ‘I wish I could take her home,’” she said. “I went to sleep, woke up and my friends and family had posted links to various rescue groups.”

One of them was the non-profit Puppy Rescue Mission, who immediately responded. Through crowdfunding, McKithern was able to raise the $4,500 needed to pay for all documentation, vaccinations and travel arrangements to get Erby to the U.S.

McKithern returned earlier this year and with help from other soldiers in Iraq, Erby was set to follow her several weeks later.

Weeks before Erby’s arrival to the U.S., McKithern received orders for a 67-day mission to Fort McCoy, Wisconsin – starting the very same day her pup was scheduled to arrive.

“I couldn’t believe it!” she recalled, “but I’m a soldier first…it killed me that it was going to keep me away from Erby for another two months, but it’s an important mission. It will all be worth it in the end.”

On March 11, as McKithern flew out to Wisconsin, her husband, Sgt. Wes McKithern, also a combat cameraman, met Erby at JFK airport in New York and drove her home to Tampa.

On Wednesday, McKithern returned home and, after many months apart, finally reunited with Erby.