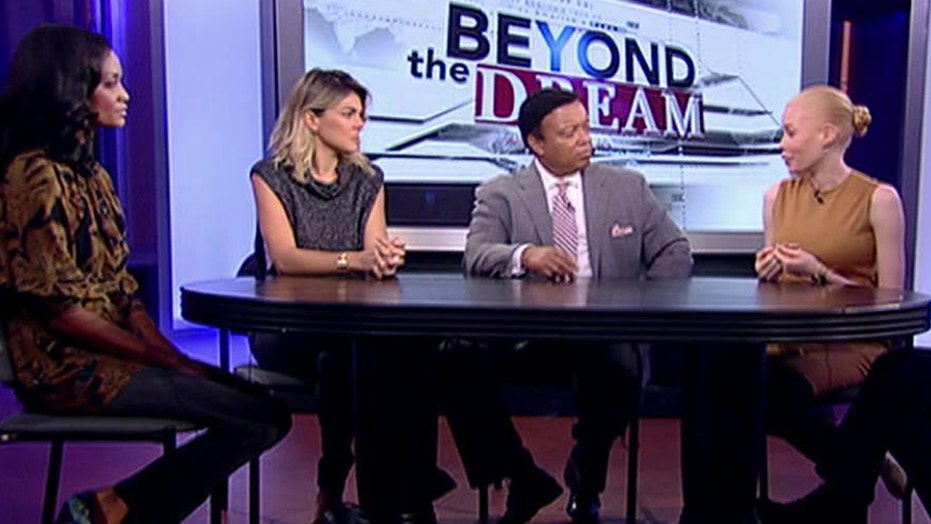 Beyond The Dream: Speaking up against sex trafficking

Successful women use power to rescue victims from trafficking

Human traffickers are exploiting the U.S. visa system by forcing young women to pose as fiancées or family members of American gang members, who force them into a life of misery once here, according to a former top federal immigration official.

Sold by their parents, lured by promises of wealth and fame or kidnapped, young women are being brought to U.S. soil in plain sight, and with federally approved paperwork, said Claude Arnold, retired special agent in charge for Immigration and Customs Enforcement’s Los Angeles bureau of Homeland Security Investigations.

“U.S. visas are being used to get trafficking victims into the country,” Arnold said. “Traffickers have brought victims over as their fiancée, or on visitor visas before the trafficker takes their passport and forces them to work in [brothels].”

“Traffickers have brought victims over as their fiancée, or on visitor visas before the trafficker takes their passport and forces them to work in [brothels].”

A newly released audit by Inspector General for the Department of Homeland Security confirms the U.S. government may have issued hundreds of visas to human traffickers, allowing them to legally bring their victims into the country.

“Data from 2005 to 2014 indicated that work and fiancée visas were the primary means by which 17 of 32 known traffickers brought victims into the United States,” the IG audit said.

The report blamed a critical lack of communication between ICE – the agency responsible for rooting out abuse and criminality - and United States Citizenship and Immigration Services, which screens applicants and issues visas.

Victims are brought into the U.S. on student and even fiancee videos, then forced to work in the sex industry. (AP)

Much attention was brought to the visa system’s vulnerability to terrorist infiltration following the Dec. 2 terror attack in San Bernardino, Calif., carried out by a radicalized U.S. citizen and the jihadist bride he brought in on a fiancée visa.

The incident and other cases of radical Islamists entering the U.S. on student and work visas helped drive a still-raging debate on immigration. But Arnold’s experience and the IG report suggest the lax visa system is facilitating a different kind of human suffering.

Many victims are Latin American women brought by savvy street gangs who know how to manipulate the legal immigration system.

Arnold warns the visa system is riddled with abuse. (ICE)

In the Los Angeles area where Arnold spent much of his career, he investigated cases in which girls and women – sometimes chained to beds in dank tenement rooms – were forced to service clients while bodyguards stood watch.

“A very common threat, the traffickers tell them if they run away, they will hurt their family, or it can be more subtle, I will tell your family that you’ve been doing this,” Arnold said. “They control them through guilt and fear.”

Gang members also game the system to bring laborers to the U.S. on H-1B visas, non-immigrant documents that allow U.S. employers to temporarily employ foreign workers in specialty occupations. Once here, they are brokered to farms and restaurants, Arnold said.

The recent audit blamed holes in the intelligence system and a lack of communication between government agencies responsible for investigating and prosecuting traffickers.

For instance, when victims are rescued, their descriptions and accounts of the traffickers who brought them are not entered into government databases. A better system could ensure that the traffickers were red-flagged the next time they went through the system with fresh prey.

“Our review of USCIS case files identified instances where children who were sold, brought to the United States, and forced into involuntary servitude, named the perpetrator as well as other potential victims in their visa application,” the audit said. “Although this information was extremely important, it was not captured in the USCIS database.”

The lack of follow through leaves known and identified traffickers “free to abuse other individuals,” the report stated.

Some 274 suspected human traffickers investigated by ICE successfully petitioned USCIS to bring 425 family members and fiancés into the United States on visas, according to the report.

Only a fraction of ICE human trafficking investigations end up netting suspects, the audit said, noting that although more than 1,000 investigations were initiated in 2013, fewer than 400 of the investigations for that same year resulted in convictions.

In response to the critical audit, USCIS and ICE pledged to establish better communication and screening processes by the end of 2017.

The audit was released just days after FoxNews.com reported foreign terrorists and spies are exploiting America’s visa system, using government-approved documents to come into the country legally as students, visitors or family members.