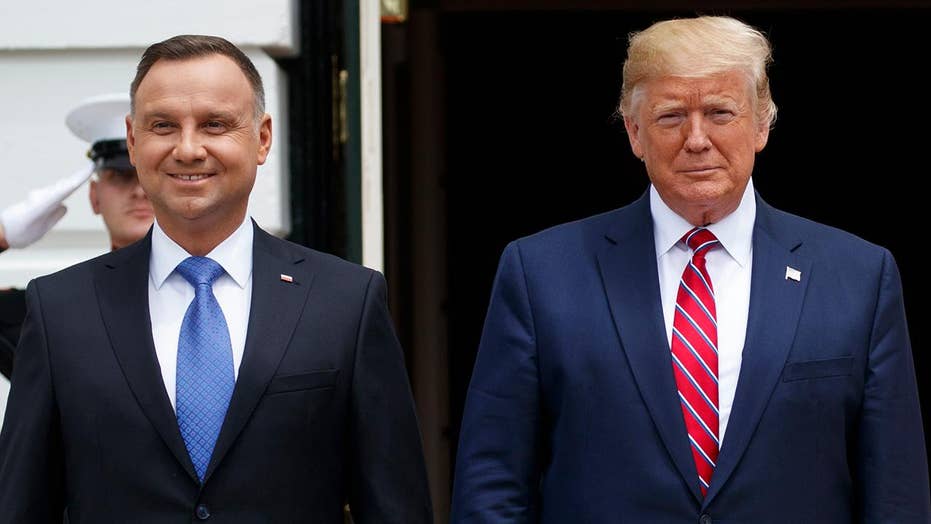 The United States will send 1,000 more troops to Poland, which has agreed to pay the entire expense, in a move that boosts the nations' defense ties, President Trump has said.

"We'll be moving soldiers there," Trump said during his bilateral meeting with Polish President Andrzej Duda at the 74th United Nations General Assembly in New York City on Monday. The two later inked the deal.

American service members will "likely" come from other places in Europe where they're already stationed. Trump said. Officials say other details will be discussed in the coming weeks.

"Poland came to us, they asked us if we would put some troops there and they will bear the entire expense," Trump said. "We appreciated that and we worked out a deal."

"They're going to be building us facilities that I'm sure will be very beautiful," the president added.

The Joint Declaration on Advancing Defense Cooperation builds on the framework discussed in June when the two leaders met in Washington, D.C.

The two countries have determined six locations where the U.S. troops will be stationed.

The nations remain "optimistic about identifying the location for the armored brigade combat team," according to the document.

The agreement ultimately "stream[lines] the functioning of the United States forces in Poland" and strengthens the North Atlantic Treaty Organization (NATO), it states.

Poland has said in the past that it would pay for a U.S. military facility in its country, unofficially dubbed "Fort Trump."

There are already about U.S. 4,500 troops stationed in Poland. Trump over the summer said the U.S. would send an additional 1,000 troops there but at the time stopped short of committing to a military facility.

Poland has in the past offered to pay up to $2 billion to build a base or multiple bases for U.S. troops.

When visiting the U.S. in June, Duda expressed concerns about neighboring Russia. Poland shares a small northeast border with a Russian territory.

“We would like Russia to be our friend, but unfortunately, Russia again is showing its very unkind, unpleasant imperial face,” Duda said while visiting the White House and discussing the countries' military deal at the time.

Trump said the thinks Russia and Poland can have a "great relationship."

"I think it’s possible. I really do,” Trump said at the time. “I think because of what you’ve done, and the strength, and maybe we help also, because of what we’re doing and doing for Poland."

Fox News' Fred Lucas and The Associated Press contributed to this report.