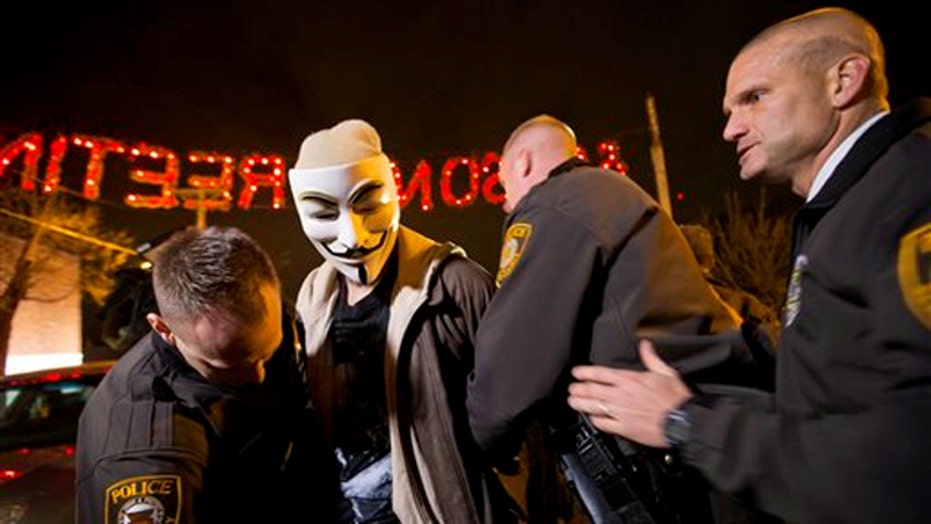 Court: Evidence from grand jury may not be released

FERGUSON, Mo. – A timeline of key events following the fatal police shooting of 18-year-old Michael Brown in the St. Louis suburb of Ferguson.

AUG. 9 — Brown and a companion, both black, are confronted by an officer as they walk back to Brown's home from a convenience store. Brown and the officer, who is white, are involved in a scuffle, followed by gunshots. Brown dies at the scene, and his body remains in the street for four hours in the summer heat. Neighbors later lash out at authorities, saying they mistreated the body.

AUG. 10 — After a candlelight vigil, people protesting Brown's death smash car windows and carry away armloads of looted goods from stores. In the first of several nights of violence, looters are seen making off with bags of food, toilet paper and alcohol. Some protesters stand atop police cars and taunt officers.

AUG. 11 — The FBI opens an investigation into Brown's death, and two men who said they saw the shooting tell reporters that Brown had his hands raised when the officer approached with his weapon and fired repeatedly. That night, police in riot gear fire tear gas and rubber bullets to try to disperse a crowd.

AUG. 14 — The Missouri Highway Patrol takes control of security in Ferguson, relieving St. Louis County and local police of their law-enforcement authority following four days of violence. The shift in command comes after images from the protests show many officers equipped with military style gear, including armored vehicles, body armor and assault rifles. In scores of photographs that circulate online, officers are seen pointing their weapons at demonstrators.

AUG. 15 — Police identify the officer who shot Brown as Darren Wilson, 28. They also release a video purporting to show Brown robbing a convenience store of almost $50 worth of cigars shortly before he was killed, a move that further inflames protesters.

AUG. 16 — Missouri Gov. Jay Nixon declares a state of emergency and imposes a curfew in Ferguson.

AUG. 18 — Nixon calls the National Guard to Ferguson to help restore order and lifts the curfew.

AUG. 19 — Nixon says he will not seek the removal of St. Louis County prosecutor Bob McCulloch from the investigation into Brown's death. Some black leaders questioned whether the prosecutor's deep family connections to police would affect his ability to be impartial. McCulloch's father was a police officer who was killed in the line of duty when McCulloch was a child, and he has many relatives who work in law enforcement.

AUG. 20 — Holder visits Ferguson to offer assurances about the investigation into Brown's death and to meet with investigators and Brown's family. In nearby Clayton, a grand jury begins hearing evidence to determine whether Wilson should be charged.

SEPT. 25 — Holder announces his resignation but says he plans to remain in office until his successor is confirmed.

SEPT. 25 — Ferguson Chief Tom Jackson releases a videotaped apology to Brown's family and attempts to march in solidarity with protesters, a move that backfires when Ferguson officers scuffle with demonstrators and arrest one person moments after Jackson joins the group.

OCT. 10 — Protesters from across the country descend on the St. Louis region for "Ferguson October," four days of coordinated and spontaneous protests. A weekend march and rally in downtown St. Louis draws several thousand participants.

OCT. 13 — Amid a downpour, an interfaith group of clergy cross a police barricade on the final day of Ferguson October as part of an event dubbed "Moral Monday." The protests extend beyond Ferguson to sites such as the nearby headquarters of Fortune 500 company Emerson Electric and the Edward Jones Dome in downtown St. Louis, site of a Monday Night Football game between the St. Louis Rams and the San Francisco 49ers.

OCT. 21 — Nixon pledges to create an independent Ferguson Commission to examine race relations, failing schools and other broader social and economic issues in the aftermath of Brown's death.

NOV. 17 — The Democratic governor declares a state of emergency and activates the National Guard again ahead of a decision from a grand jury. He places the St. Louis County Police Department in charge of security in Ferguson, with orders to work as a unified command with St. Louis city police and the Missouri Highway Patrol.

NOV. 18 — Nixon names 16 people to the Ferguson Commission, selecting a diverse group that includes the owner of construction-supply company, two pastors, two attorneys, a university professor, a 20-year-old community activist and a police detective. Nine of its members are black. Seven are white.