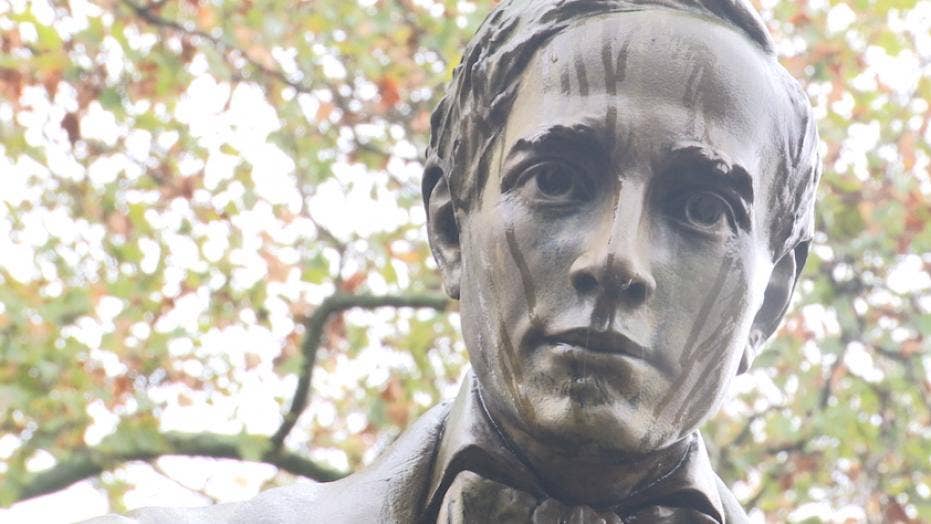 Pennsylvania statue could come down over racism claims

The national debate over whether controversial statues should be removed has now put a spotlight on Pittsburgh. A statue of Stephen Foster, dubbed "America's First Composer,” faces an uncertain future after calls for its removal.

The statue features the songwriter as he sits on a perch while a barefoot slave plays the banjo below him.

Foster, a Pittsburgh native who died in 1864, is known for writing songs like "Oh! Susana,” "Old Folks At Home,” and "Old Black Joe.”

His statue was placed in Pittsburgh in 1900 and currently stands near the University of Pittsburgh's Stephen Foster Memorial.

Pittsburgh residents sounded off their opinions to the city’s art commission in a meeting held to get community feedback in the beginning of October.

“It just doesn’t really portray something that as a community we should be supporting,” Abigail Benkovich told Fox News, adding that she recognizes the historic nature of the statue.

“It’s been that way for a long time.” Charles Bose said. "It’s part of history, and that’s why it should be left alone"

“Maybe it should come with a description,” she told Fox news.

As residents await the final decision, Pittsburgh Mayor William Peduto acknowledged he was in a tough spot.

"Deciding what happens to sculptures is an uncomfortable position for a politician to be in.” Peduto told Fox News in a statement. "Whatever I do will be based on findings by the experts on the Art Commission, and upon the history of the statue, the history of Stephen Foster, where we are today as a culture, and the impact of the art itself on our city."

Some residents said focusing on the recent statue controversies popping up across the country should not be a priority.