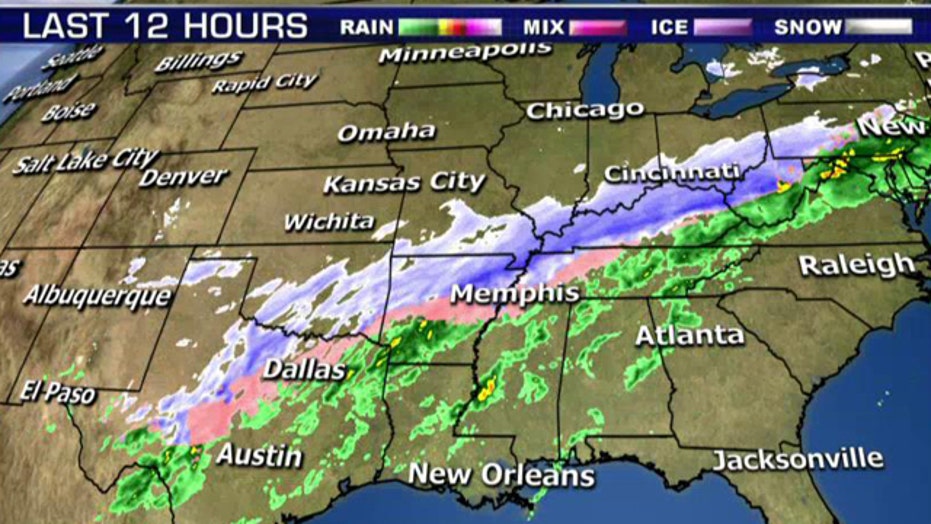 Residents from north Texas to southern New England prepared for snow, sleet, and freezing rain as what many hoped would be the final storm of a brutal winter bore down on the East Coast.

In Washington, D.C., the federal government announced that it offices would be closed Thursday due to an expected snowfall of between 4 and 8 inches. The Office of Personnel Management says non-emergency personnel in and around Washington are granted excused absences for the day. Emergency employees and telework-ready employees are expected to work.

The House of Representatives and Senate also scrapped their scheduled session Thursday due to the weather forecast. Senate leaders set the last vote of the week for 2:30 p.m. Wednesday. But that wasn't good enough for Sen. James Inhofe, R-Okla.

"Is there any way you could change that to 2:20 from 2:30?" Inhofe asked on the Senate floor. "There are four people who can't make planes otherwise." His request was accommodated.

Governors in Alabama, Mississippi, West Virginia and New Jersey declared states of emergency in advance of the storm, while Mississippi counties were advised to open shelters powered by generators to give residents an option beyond cold, dark homes in the event of power outages.

Temperatures plummeted as the storm pushed east: The mercury fell from 71 degrees to 52 degrees in Monticello, Arkansas, and from 74 to 48 in Greenville, Mississippi — both within an hour. By Wednesday afternoon, readings were in the mid-20s across Arkansas.

The Cincinnati Enquirer reported that a winter storm warning was in effect for the area until 1 p.m. Thursday, and snowfall was expected to reach six inches. Philadelphia, where a snow emergency went into effect Thursday morning, was expected to get between 5 and 8 inches, while New York City was expecting between 4 and 6 inches of snow, with parts of Long Island forecast for even more.

But no city has been hit harder this winter than Boston. The latest snowfall was expected to put the city close to matching, if not breaking, the high mark for recorded snowfall, set at 107.6 inches in the winter of 1995-96. The city's records date back to 1872.

As of Wednesday night, the city was just over 2 inches away from matching the mark, a milestone some Bostonians said they were eagerly anticipating.

"I want the record. We earned the record," Erin O'Brien, a professor of political science at the University of Massachusetts-Boston, told the Associated Press.

Others were less enthusiastic.

"I really don't care if we don't beat the record for snowiest winter," said Amy Ouellette, a marketing associate in Salem, north of Boston. "I just want it over and I want spring and sun to melt it all."

The patience of thousands of air travelers across the nation was going to be tested as airlines canceled more than 1,800 U.S. flights scheduled for Thursday after scrubbing nearly 1,700 through early evening on Wednesday, according to tracking service FlightAware.com.

The airports that were hardest hit Thursday included Dallas-Fort Worth, Philadelphia, Reagan National and Dulles in the Washington area, and LaGuardia and Newark in the New York City area.

The bulk of cancelations for Thursday are on regional carriers such as ExpressJet and Republic that operate flights with smaller aircraft for the major airlines.

Schools from Texas to West Virginia closed early Wednesday and Penn State University canceled classes due to weather for the first time in eight years. The Ohio State University men's basketball team had a harrowing trip back to their game against the Nittany Lions Wednesday evening, as icy runways in State College, forced the team's plane to land in Latrobe, about 110 miles away. The team took a bus the rest of the way to Penn State, traveling at times through dense fog and rain. The Buckeyes managed to shake off the unplanned detours and won the game, 77-67.

In upstate New York, wet, heavy snow was blamed for a partial barn roof collapse that killed at least five cows Wednesday morning in central New York. The collapse at the Whey Street Dairy in Cuyler, 25 miles southeast of Syracuse, was one of hundreds of roof collapses blamed on heavy snow in the Northeast this winter. Massachusetts officials say they've received reports of nearly 200 roof collapses since Feb. 9.

No one was injured Wednesday morning when a 100-foot by 100-foot section of the roof of Boston's vacant Bayside Expo Center collapsed. The building was previously slated for demolition.