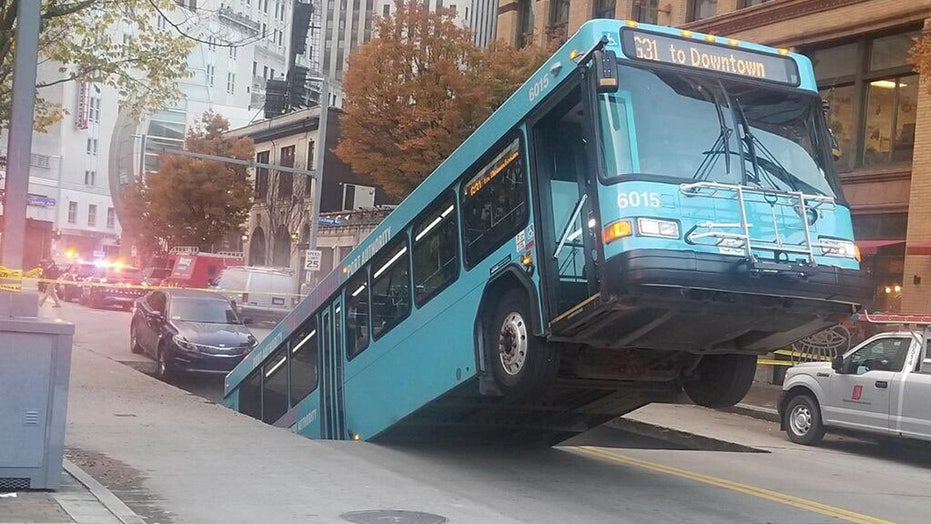 The morning commute was more of a struggle than usual for commuters in the Steel City Monday, after a large sinkhole opened up in downtown Pittsburgh and swallowed part of a bus.

The Port Authority of Allegheny County said the incident happened on Penn Avenue at 10th Street during the height of the morning rush hour, when the sinkhole opened up and swallowed the back section of the bus.

Photos from the scene showed the entire rear of the bus in the sinkhole, with the front part of the vehicle sticking up in the air.

"For those curious, the heaviest part of the bus is the back because that’s where the engine is located," the Port Authority tweeted. "This bus was stopped at a red light at the time this occurred."

A bus was swallowed in a sinkhole in downtown Pittsburgh on Monday. (Port Authority of Allegheny County)

2 DEAD IN INDIANA AFTER CAR PLUNGES FROM 4TH-FLOOR PARKING GARAGE, CRASHING BELOW

Emergency crews were called to the scene just before 8 a.m.. Witnesses told WPXI-TV the bus was at a red light when the street suddenly gave way and the bus fell into the hole.

The rear of the bus fell into the sinkhole, leaving the front part sticking up in the air. (KDKA via NNS)

Officials told KDKA that only two people were on the bus at the time: the driver and a passenger.

The Port Authority said the lone passenger on board was treated by medics for what was described as a minor injury and transported to an area hospital.

Officials called in a tow truck to pull the bus out of the hole.

Children who were at a nearby daycare center were evacuated to another location while the bus was being removed and repairs were made in the area, WPXI reported.

The incident caused a stretch of Penn Avenue to be closed, causing detours for several bus routes and heavy delays for commuters.