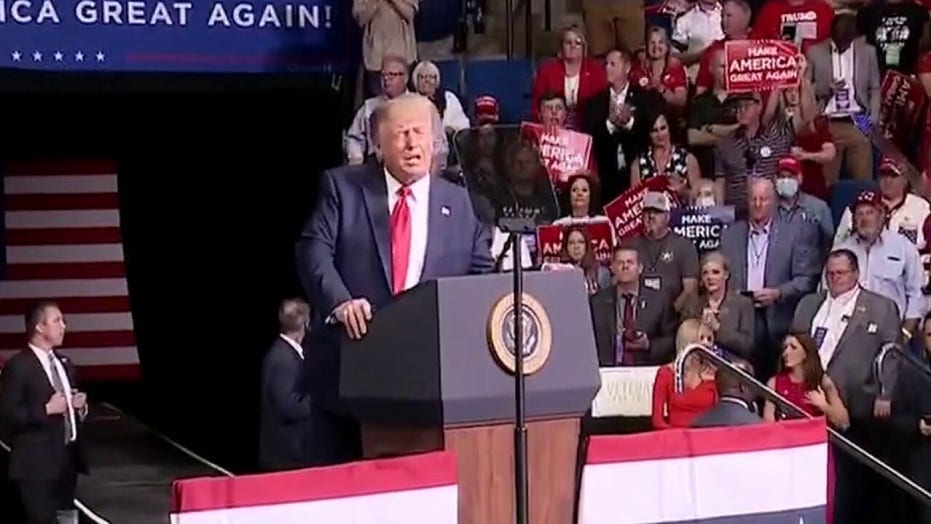 Dozens of Secret Service personnel were instructed to self-quarantine as a precaution against the coronavirus following President Donald Trump's rally last week n Tulsa, Okla., according to a report.

The order came after two Secret Service members and at least eight Trump campaign advance staffers tested positive for the virus, including two staffers who learned of their infection after the president returned to Washington on Wednesday, The Washington Post reported.

In a statement to Fox News, a Secret Service spokeswoman said the agency would not confirm the details of the Post report.

Supporters of President Trump listen to him speak during a campaign rally at the BOK Center in Tulsa, Okla., June 20, 2020. (Associated Press)

The Secret Service employees who attended the Tulsa rally were asked to stay home for 14 days after returning from the trip last weekend, according to the paper.

The agency's preparedness has not been affected in any way, Milhoan told Fox News.

"The U.S. Secret Service remains prepared and staffed to fulfill all of the various duties as required. Any implication that the agency is in some way unprepared or incapable of executing our mission would be inaccurate," Milhoan said. "Since the beginning of this pandemic, the Secret Service has been working with all of our public safety partners and the White House Medical Unit to ensure the safety and security of both our protected persons and our employees."

The Post report came after eight Trump staffers who were part of the rally preparation became infected with COVID-19 in recent days, including six who tested positive ahead of the Tulsa gathering on Saturday night.

“After another round of testing for campaign staff in Tulsa, two additional members of the advance team tested positive for the coronavirus," Trump 2020 Campaign communications director Tim Murtaugh confirmed Monday.

"These staff members attended the rally but were wearing masks during the entire event. Upon the positive tests, the campaign immediately activated established quarantine and contact tracing protocols."

A spokesperson for the Tulsa Fire Department told Fox News on Sunday that fire marshal records show just under 6,200 scanned tickets were logged for the rally at the BOK Center, which had a capacity of roughly 19,000.

All of the rally attendees underwent temperature checks before heading through security screening and were offered face masks and hand sanitizer. The campaign, however, emphasized that wearing a face covering was optional, and many were seen without masks.

There were 259 new cases of the coronavirus reported in Tulsa on Tuesday, the highest daily total since the start of the pandemic, according to the Tulsa Health Department. The previous record was 143 new cases set on Saturday.

Last month, at least 11 Secret Service members -- charged with protecting President Trump and other officials -- had tested positive and were sidelined from the virus, according to a Department of Homeland Security tally reviewed by Yahoo News.

During that time, 23 other members of the Secret Service were said to have recovered from COVID-19 and roughly 60 agency employees had self-quarantined as a precaution, the news website reported.