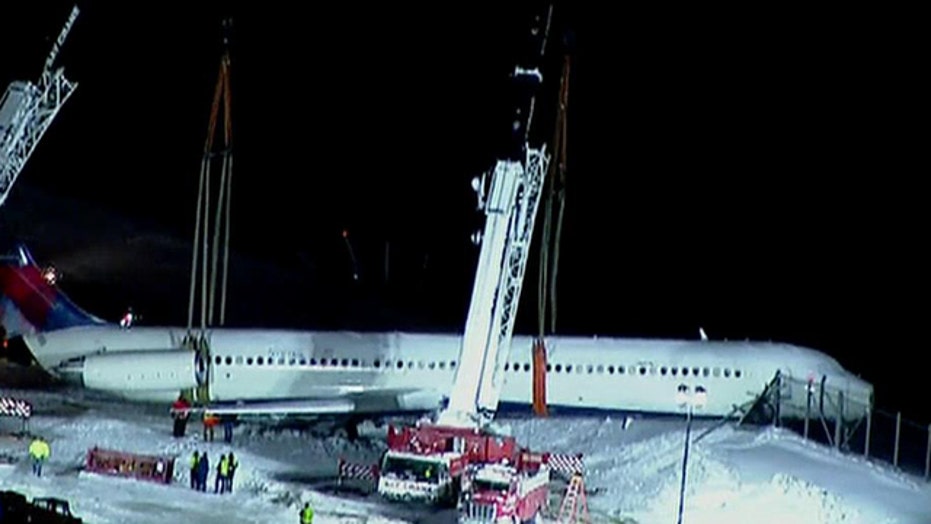 New York City's LaGuardia Airport reopened its second runway Friday after removing a Delta jetliner that skidded and smashed through a fence a day earlier.

Six people were hurt in the incident Thursday. The nose of the plane came to rest just feet from icy Flushing Bay.

The plane has been taken to a hangar.

The National Transportation Safety Board plans to retrieve the flight data and cockpit voice recorders and to document damage to the aircraft.

The mishap has raised questions about planes landing in icy conditions.

There's no rule about how much snow or ice leads to a runway closing. Instead, the Federal Aviation Administration requires airports to measure runways during winter storms to assure planes can safely brake: A specially equipped vehicle races down the runway with a computer checking braking action, and if the runway fails the test it must be closed.

The runway had been plowed minutes before, and two other pilots had reported good braking conditions, said Patrick Foye, executive director of the Port Authority of New York and New Jersey, which runs the airport. It appeared the pilot did everything he could to slow the aircraft, he said.

"The plane did not make contact with the water," Foye said. "Happily, that was not a risk today."

The National Transportation Safety Board said it was sending an investigator to retrieve the plane's flight data and cockpit voice recorders and to document damage to the plane.

At airports with longer runways, pilots glide a few feet above the runway and gently touch down. At LaGuardia, Cox said, "you put the airplane on the ground and stop it."

On Flight 1086 from Atlanta, passengers said there was a surreal calm as the plane bounced and slid off the runway, but some children started crying after it came to a stop. It was only then that everyone realized how close they had come to plunging into freezing saltwater.

Passengers were told to exit over the broken right wing because the door out the back was too close to the water. They climbed off the plane dressed in their heavy winter coats and scarves and tromped through several inches of snow.

"As we walked across the runway, it was covered with so much snow that I was wondering: Who decided it was safe to land here?" said passenger Jane Kaufman, of Gainesville, Florida.