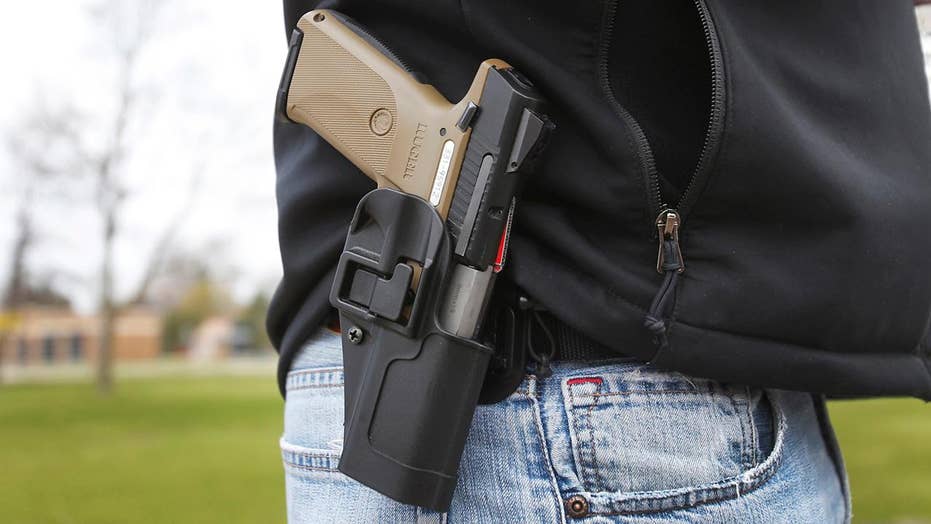 Michigan Supreme Court to hear case on guns in schools

Public schools want right to set own guidelines when it comes to open carry and concealed weapons in their buildings; gun proponents say that violates state law.

The highest court in Michigan is set to hear arguments Wednesday on whether a person has the right to openly carry guns on school property -- a case getting considerable attention in the wake of the Florida school massacre nearly two months ago.

At issue is a case that's been on the court's docket for more than a year, stemming from a 2015 incident involving a man with a concealed-carry permit who brought a gun to a school concert at Ann Arbor Pioneer High School. Some students, staff and spectators were scared by the incident, which caused the school board to ban all guns on school grounds, with exceptions for police.

That local action spurred a legal fight that's now landed with the state's supreme court -- because while Michigan law does not allow people to possess a gun inside gun-free school zones, someone with a concealed permit can enter school property with a gun that’s openly holstered.

A gun carried by a spectator at a school concert at Pioneer High School in 2015 has turned into a major legal case. (AP)

Lambert's group is one of many involved in the lawsuit, which also includes the Cilo School District, located north of Flint, over a similar policy. The Supreme Court is hearing challenges from gun owners in both communities over the issue.

“The truth is we’ve had open carry in our schools for a long time," Lambert said. "In our case the trial court originally ruled in our favor. Until the court of appeals ruled against us, there were many schools in the state that allowed open carry.”

Students at Florida school walk out in support of gun rights

Gun-rights advocates argue that local governments, including elected school boards, cannot make their own regulations that supersede state laws. A Lansing-area library whose ban on the open display of guns was struck down by the state appeals court in 2012 is being used as an example in that argument.

In a previous ruling by an appeals court, a three-judge panel said schools are in a different category and have freedom to further restrict guns. The Michigan Supreme Court on Wednesday could decide to hear the case and rule on it, or remand it back for further review, according to FOX17.

Ken Herman, a paramedic and gun-owning parent involved in the lawsuit against the Clio district, believes the appeals court got it wrong. In a filing at the Supreme Court, his attorney said schools have a duty to keep students safe, but lawmakers have "chosen to reserve the power to regulate the possession of firearms."

Herman, 36, told The Associated Press his fears would be eased if more adults educated kids about proper gun ownership.

"If adults are OK with it, there are no alarm bells," Herman said. "If they overreact and yell 'fire' every time a law-abiding citizen is carrying, they're sending the wrong message."

The superintendent of Ciilo Public Schools told FOX17 the "bigger issue" is the ability of school districts to create their own rules "within the law."

A shooting breaks out at a Maryland high school shooting as more than 500,000 American students plan a gun control march in DC. What they won’t be protesting are the numerous system failures that led to the Parkland massacre. #Tucker

“Obviously, we don’t believe that individuals should open carry in our school unless they are uniformed officers of law enforcement,” Fletcher Spears III said.

Spears added that the overall goal should be to give students the best protection possible, and that gun-free zones may not be the answer.

“I firmly believe that we ought to get rid of this notion of gun-free schools and put armed law enforcement officers and school resource officers to work with our kids," he told FOX17.