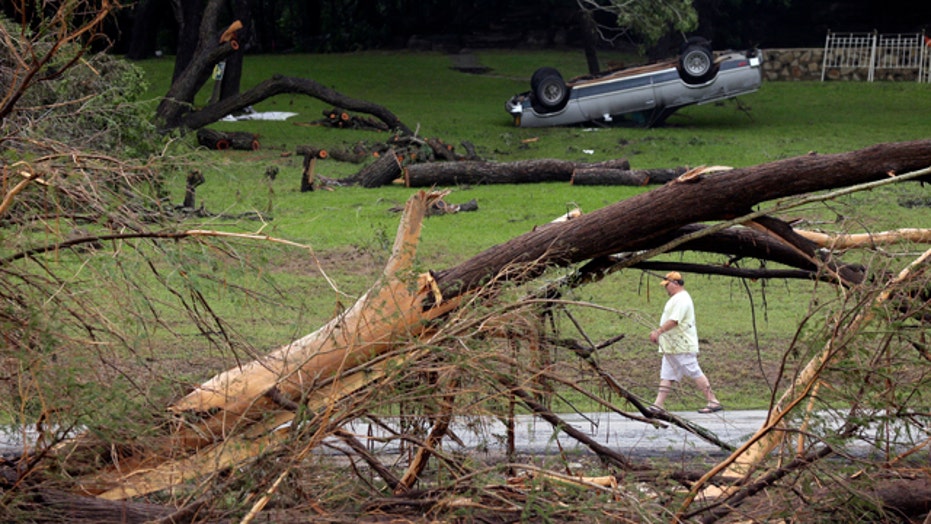 Texas flooding survivor on aftermath: 'Like a bomb went off'

Local officials in Texas have urged residents living near rivers swollen by torrential rainfall to consider evacuating their homes due to the threat of more flooding later in the week.

The National Weather Service said Thursday that  hail, tornadoes and thunderstorms are possible across the southern Plains and that flooding remains the greatest threat for areas that have received record rainfall.

Meteorologist Steve Goss, of the Storm Prediction Center in Norman, Oklahoma, says much of the area from western Kansas to West Texas should prepare for thunderstorms later Thursday. He says the storms will be intense and slow moving.

Much of Texas and Oklahoma have already received record rainfall this month and forecasters say more rain would likely cause more flooding.

In Wharton, a town of approximately 8,800 located about 60 miles southwest of Houston, Mayor Domingo Montalvo asked residents who live in 300 homes on the west side of the city to voluntarily evacuate due to the predicted rise of the Colorado River. The National Weather Service reported the river level at Wharton was almost 36 feet as of 2 p.m. local time Wednesday. The river was expected to top its 39-foot flood stage level Wednesday night and not crest until it reaches almost 46 feet Friday evening, which would flood the homes as well as a school.

"Our main concern was getting residents ahead of the game and giving them notice to voluntary evacuate," Paula Favors, Wharton's city secretary, told the Associated Press.

A similar warning was issued in the Parker County town of Horseshoe Bend in North Texas, where officials asked about 250 residents to leave their homes as the Brazos River was expected to rise above its flood stage of 21 feet on Thursday.

Mandatory evacuations were ordered for about 350 homes west of the Brazos in Fort Worth. Parker County officials said Wednesday that residents need to clear out of the homes by 8 p.m. local time. The evacuation order primarily affected homes in the communities of Horseshoe Bend, Lazy Bend and Soda Springs.

Severe storms that began last week have killed at least 23 people in the U.S. and another 14 in Mexico.

Two more bodies have been recovered from flooded Central Texas streams, and authorities have added five more people to the list of the missing.

Officials in Blanco County said Thursday that the body of 42-year-old Zachary Jones of Blanco was found inside his vehicle along the Blanco River early Sunday.

In Houston itself, authorities confirmed seven people died in flooding that swept through the city Monday night. The latest victim was identified Wednesday as a 73-year-old woman who was reported missing by her family when she failed to report for work Tuesday afternoon.

In the suburbs of the city, the San Jacinto River was at 52 feet, nearly 3 feet above its flood stage. Officials warned that rising waters were expected to cover the streets of some subdivisions on the west fork of the river, possibly stranding residents for between four and six days.

"We're advising residents to take any measures that they deem appropriate for their safety as the river continues to rise," Kim Jackson, a spokeswoman for the Harris County Flood Control District, said.

The wild weather wasn't limited to rainfall. Officials said at least one tornado struck a gas drilling rig north of the town of Canadian in the Texas Panhandle Wednesday afternoon, injuring three workers.

A spokeswoman for the Hemphill County Sheriff's Office told the Associated Press the work shack on the rig floor was severely damaged.

Two people were taken to Northwest Texas Healthcare System in Amarillo, about 100 miles southwest of the rig site. One was being treated for an abdominal impalement and another for non-life-threatening facial injuries. A hospital spokesman said conditions weren't available for the second person. Sheriff's spokeswoman Julie Boydston said a third worker suffered minor injuries.

This month has been the wettest on record for Texas. The Office of the State Climatologist at Texas A&M University said Wednesday that an average of 7.54 inches of rain has already fallen in May, besting the previous record of 6.66 inches, which fell in June 2004. The wettest area has been from Dallas-Fort Worth to the Red River, where some places have gotten more than 20 inches of rain.