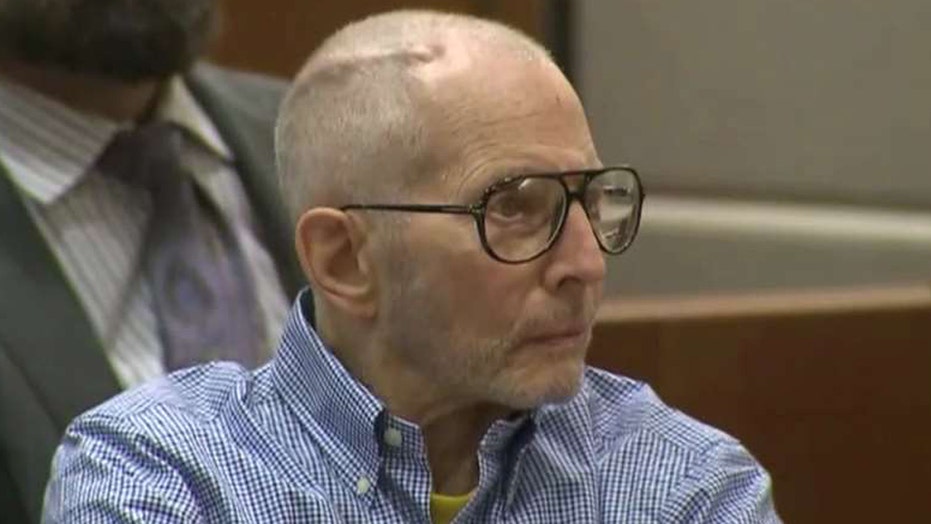 Is frail Durst a danger to witnesses despite being in jail?

The man being pushed in a wheelchair into Los Angeles Superior Court, Department 181 is 73 years old. He's in poor health. He's being held in jail. He's also worth an estimated $100 million.

And he's a killer who could kill again, according to prosecutors. Los Angeles Assistant DA John Lewin put it succinctly in court Friday, pointing at the elderly man, pausing for effect, and saying, "This man kills people. That's what he does. When he's pushed into a corner, he murders people."

The man is Robert Durst, the New York real estate heir. An "old, frail" man according to his lawyers; a cold, calculating killer in the eyes of prosecutors and, "an ever-present danger."

GRIEF, ANGUISH AS LOVED ONES RECALL VICTIMS OF DYLANN ROOF AT SENTENCING

They say Durst murdered his wife, his friend, and his neighbor... and now he may be planning to orchestrate the murder of those planning to testify against him in his upcoming court trial.

That, in a nutshell, is the argument being made by prosecutors in Los Angeles who on Friday asked a judge to let them get videotaped testimony from two secret witnesses before the full trial starts because they, "may be killed and evidence lost forever."

Durst is charged in Los Angeles with the murder of one of his closest friends, Susan Berman, in 2000. Prosecutors say he shot her in the back of the head at her home because he feared she was about to talk to police about the still unsolved disappearance of Durst's wife, Kathie, in 1982.

After killing Berman, prosecutors claim, Durst fled to Galveston, Texas, living and hiding there, dressing as a woman and pretending to be mute. Then, when his neighbor Morris Black discovered his true identity, prosecutors say, Durst shot Black and dismembered his body. Durst beat the murder charge in that case, claiming he killed Black in self-defense. As for decapitating Black, Durst’s lawyers successfully argued that he was drunk when he did it.

Given his history of violence, prosecutors argued in court Friday, they need to protect witnesses and testimony.

The judge agreed, saying, "We have to accept at lesser the possibility of danger."

And so two witnesses, one of them still kept secret by prosecutors, will testify in court at what promises to be an extraordinary hearing on Feb. 14.

After the ruling, Durst leaned heavily on the table in front of him, lifting his frail frame out of the wheelchair, then slowly turning to look at the three rows of assembled reporters and civilians behind him.

His eyes seemingly locked for a second on each of us. Sizing us up? Committing our faces to memory? Seeking a sympathetic eye? Were we looking into the eyes of a killer, or simply a sick old man?

A jury will decide in the next few months in what promises to be one of the most extraordinary trials of 2017.