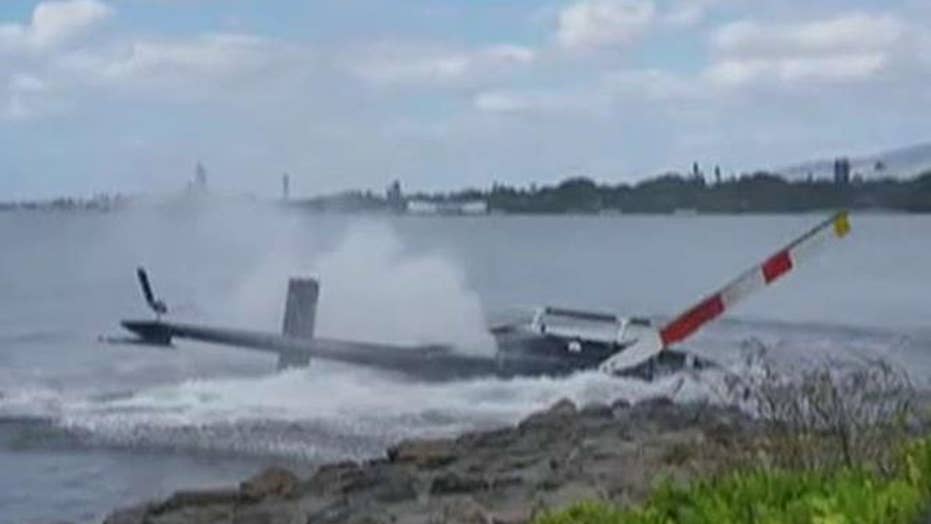 HONOLULU – The National Transportation Safety Board said Wednesday that the pilot of a tour helicopter that crashed in Pearl Harbor was heading to a grassy area to land after hearing a loud bang.

But the agency's preliminary crash report said the pilot noticed people were there so he attempted to land close to shore instead.

Video of the Feb. 18 crash taken by a tourist at the Pearl Harbor visitors center showed the Bell 206 helicopter slamming into the water about 20 feet from shore and sinking.

The pilot felt a vibration and heard a grinding noise during the flight, the report said.

A 16-year-old passenger who was on board the helicopter with his family died Monday. Witnesses said the boy was trapped underwater and had to be cut free from his seat.

Riley Dobson of Guelph, Ontario, was well known in Ontario's equestrian show-jumping community. The Upper Grand District School Board issued a statement Tuesday that said it was "extremely saddened" to learn of his death.

Two other passengers and the pilot were seriously injured. One passenger suffered minor injuries.

Federal records show the helicopter is registered to Jeffrey Gebhard of Kailua, Hawaii. The Navy said the helicopter reportedly belongs to Genesis Aviation. The website for Genesis Helicopters says it was founded by Gebhard and conducts tours over Oahu.

The NTSB report said the helicopter took off from Honolulu International Airport at 9:35 a.m. and crashed at 10:20 a.m.

Civilian divers floated the helicopter to the surface Friday, and a crane pulled it out of the water. All major structural components of the helicopter were recovered, the NTSB said.

The agency plans to issue a final report on its investigation.