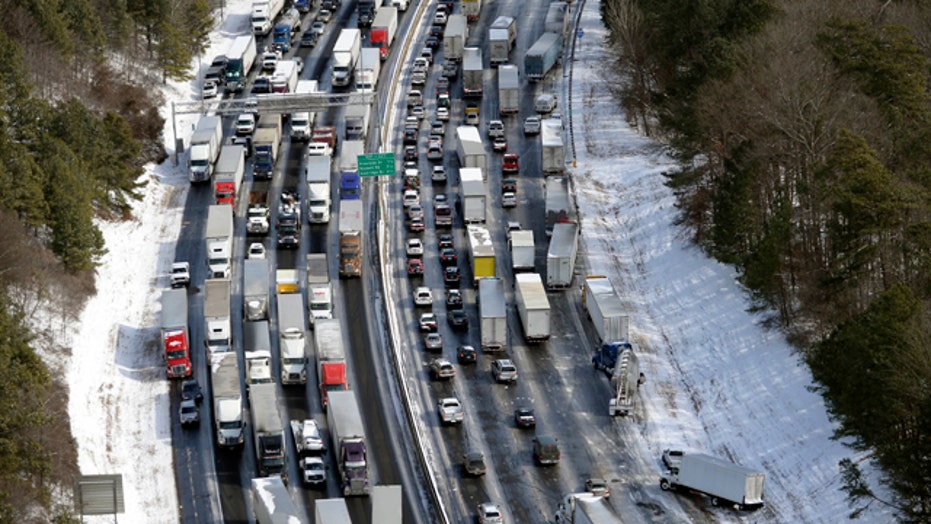 Rescue efforts are under way Wednesday after thousands of schoolchildren and hundreds of drivers in the Deep South spent the night stranded at schools and along ice-covered highways following a rare winter storm that brought freezing rain, snow and bitter cold to the region.

Atlanta Mayor Kasim Reed says "a lot of people" are still stranded in their cars on the highways nearly 24 hours the storm slammed the city, but he is not sure of exactly how many people.

Georgia Gov. Nathan Deal said the Georgia State Patrol is also sending troopers to schools where children remain stuck after spending the night in classrooms. He also said state transportation crews are continuing to treat roads and bring gas to stranded motorists, adding that the state's goal Wednesday is to make sure every stranded driver gets offered the opportunity to go somewhere safe and warm.

There were several reports of stranded school buses in Gordon County, but there were no reports of any serious injuries, according to MyFoxAtlanta.com. Deal said there are no more students stranded on buses in Atlanta area.

While some parents were able to pick up their children at schools on Tuesday, thousands of other students in Alabama and Georgia skipped the roads altogether, spending the night in schools.

In Hoover, Ala., school superintendent Andy Craig said 4,500 students spent the night in facilities there, MyFoxAL.com reports. In nearby Birmingham, Mayor William Bell said Tuesday around 1,200 students would be staying overnight in area schools, with access to food and water.

Northeast of Birmingham in Etowah County, police used a military-style armored vehicle to take home 14 children who weren't able to leave a high school. And about 20 miles north, around 110 children and 30 adults camped out on exercise mats in classrooms at Oak Mountain Intermediate School, said principal Pat LeQuier.

More than 2,000 students also remain stuck Wednesday at schools in the Atlanta area, the Atlanta-Journal Constitution reports. Deal said those students will get escorts home from National Guard vehicles or police.

The mad rush began at the first sight of snow: Across the Atlanta area, schools let out early and commuters left for home after lunch, instantly creating gridlock as highways surrounding the city that rarely see snow were converted into treacherous paths of ice.

Atlanta, hub to major corporations, once again found itself unprepared to deal with the chaos — despite assurances that city officials had learned their lessons from a 2011 ice storm that brought the city to its knees.

Reed said at a press conference Wednesday that it was an error to let everyone out at once.

“If we had not had everyone exiting at the same time and going en route to pick up their children, then I don’t think we would have had the kind of gridlock that people are seeing around the nation, which are highways that are full,” he said.

Reed also got into a heated exchange with a reporter when asked about grading the city's response to the snow.

The gridlock was so bad in Atlanta that a baby girl was delivered alongside Interstate 285, said Capt. Steve Rose, a spokesman for Sandy Springs police in suburban north Atlanta. He said an officer made it to the mother and her husband in time to help with the delivery, which he described as "flawless." There were no complications and the family was taken to a hospital.

Chris Kennedy said it took him more than 5 hours to get a school near his house in the northwest Atlanta suburb of Acworth. The trip typically takes 10 minutes.

Before dawn Wednesday, nearly 50 work crews focused on metro roadways "and are hopeful Wednesday will bring a full recovery," the Georgia Department of Transportation said.

"Clean-up efforts continue on metro Atlanta freeways and other roads in north and central Georgia and significant progress is being made," state transportation officials said in a Wednesday morning update.

Around Atlanta, nearly all public entities and most businesses were shut down early Wednesday. Officials encouraged would-be motorists not to drive. City buses were not running, and some commuters who opted for rail service met new frustrations as they stood on platforms awaiting trains into the city center.

Forecasters said temperatures should rise above freezing Wednesday, but not by much so it was unknown whether roads would thaw enough to allow traffic to move normally.

In Alabama, public safety officials spent the night rescuing around 100 people on interstates and back roads, MyFoxAL.com reports.

Others who were still stuck in roads throughout Alabama went to Facebook, posting information about stranded motorists, while Good Samaritans offered to help.

“I'm in the Hoover are and ready to help. Have a warm house and a capable Jeep. Can bring gas, supplies, offer a ride, pull out a car or whatever it is you need,” wrote one resident.

Overnight, the South saw fatal crashes and hundreds of fender-benders. Jackknifed 18-wheelers littered Interstate 65 in central Alabama. Ice shut down bridges on Florida's panhandle and the Lake Pontchartrain Causeway, one of the world's longest spans, in Louisiana. Some commuters pleaded for help via cellphones while still holed up in their cars, while others trudged miles home, abandoning their vehicles outright.

Linda Moore spent 12 hours stuck in her car on Interstate 65 south of Birmingham before a firefighter used a ladder to help her cross the median wall and a shuttle bus took her to a hotel where about 20 other stranded motorists spent the night in a conference room.

"I boohooed a lot," she said. "It was traumatic. I'm just glad I didn't have to stay on that Interstate all night, but there are still people out there."

As of Wednesday, Georgia State Patrol responded to 1,254 accidents, according to Commissioner Mark W. McDonough. He said 130 injuries were reported along with one weather-related death.

Alabama State troopers have also identified three people killed in traffic accidents that they say may have been weather-related. And in Mississippi, four people were killed in a mobile home fire blamed on a space heater.

For a second-straight day, the world's busiest airport in Atlanta was leading all other airports in the number of canceled flights. By Wednesday afternoon, more than 900 flights in and out of Hartsfield-Jackson Atlanta International Airport were canceled, according to the flight tracking website FlightAware.com.

The extreme cold makes it difficult for airport crews to de-ice planes.

In response to the storm, the governors of North Carolina, South Carolina, Georgia, Alabama, Louisiana and Mississippi all declared states of emergency. Shelters opened up across the region and many schools remained closed Wednesday.

Meanwhile, in the Midwest, dangerous cold continued to grip the region even as the storm moved south. Many schools closed for the second straight day. In Minnesota, forecasters said wind chills could reach 35 to 50 degrees below zero.