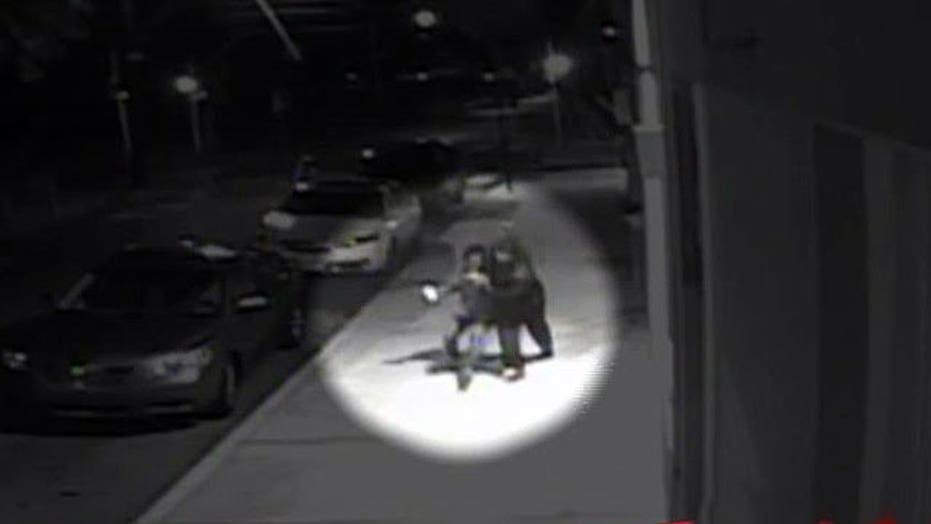 Philadelphia police released dramatic surveillance video Monday that showed the abduction of a young woman in the Germantown section of the city the previous night.

Officers identified the victim to WTXF-TV as 22-year-old Carlesha Freeland-Gaither. Relatives say Freeland-Gaither was walking home from a party at approximately 9:40 p.m. local time Sunday when she was approached by a man.

The video begins by showing the suspect's car turning onto a deserted street before stopping just out of the camera's frame. A man then gets out of the car and walks up the block before confronting Freeland-Gaither. The woman appears to initially walk away, but the suspect grabs her, pulls her back to his car and takes off. Freeland-Gaither's phone and glasses were found at the scene.

Police said Tuesday that bank card belonging to Freeland-Gaither had been used in Maryland. Surveillance images show a man using the woman's card at 6 a.m. Tuesday at a bank located near a highway exit in Aberdeen.

The FBI is offering a $25,000 reward for information leading to the arrest and conviction of a suspect. That's in addition to rewards totaling $17,000 from local officials.

Freeland-Gaither's grandmother, Ana Mulero, said the missing woman had lived with her in Maryland for several years and still had acquaintances there.

"Just return her to us, to her family," Mulero said. "We need her."

To her daughter, Gaither said: "Just fight. Don't give up. Just fight."

Freeland-Gaither, a nursing assistant at Presbyterian Hospital in Philadelphia, graduated from high school in Maryland and lived with her grandfather in Philadelphia until a couple of months ago, when she moved in with her boyfriend, relatives said.

A WTXF reporter saw crime scene investigators arrive at the scene Monday and examine broken glass that police believe Freeland-Gaither kicked out at some point during the abduction. Police say the glass was from an early 2000s model grey Ford Taurus.

The 22-year-old was last seen wearing a light blue jean jacket, a gray and white sweater, blue jeans and tan/green shoes. She was also carrying a black backpack. She is described as standing 5 feet 3 inches tall and weighing 125 pounds, with brown eyes and braided hair. She has a tattoo on her lower back.