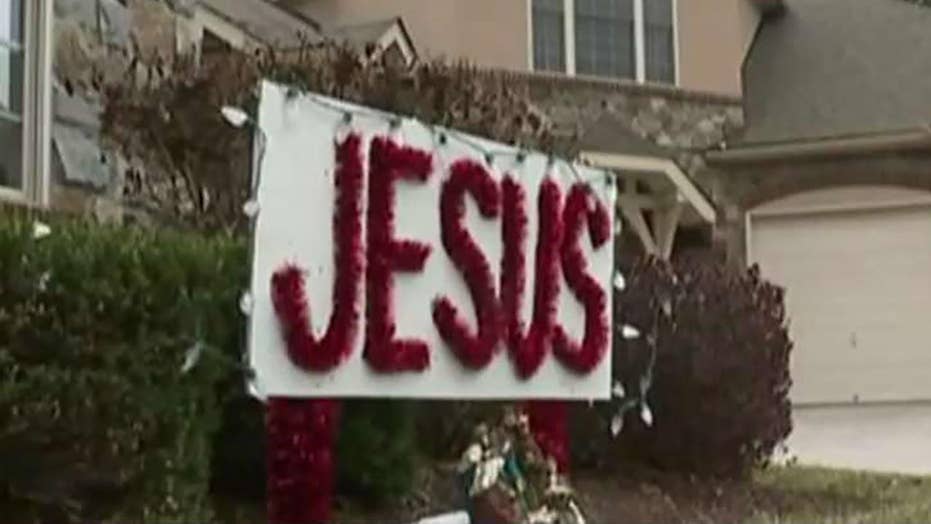 Family fighting back and keeping their Christmas display in Pennsylvania.

A Pennsylvania family was ordered by their homeowner’s association to take down their Jesus Christmas display after one of the neighbors reported it as offensive.

"As part of our Christmas decoration, we would display the name Jesus to point out to everyone that we in this family believe that the reason for the season is to celebrate the birth of Jesus," said Mark Wivell told FOX43.

But the homeowner’s association wasn’t having it.

On Sunday, the association told the family to take down the sign after a neighbor complained it was offensive. The homeowner’s association also claimed the display was a sign, not a decoration – which is a violation of the rules, USA Today reported.

"After taking a look at it, it isn't in accordance with normal Christmas decorations," Bud Vance, the Courtyards president, wrote in a statement to the Gettysburg Times.

The Wivells insist they are following the rules.

The Wivells also said many others supported their right to display the sign.

"When this happened, we were really shocked," Lynn Wivell said. "We have gotten tremendous support from our neighbors here at the Links and that just makes us feel so good."

The family said they have no plans to take down the sign until January 15, when the association requires all displays to be taken down. Family members said they are unsure which neighbor was offended.

"People get offended by different things, but just because something offends you, doesn't mean the whole world has to change to accommodate you, so I would say please be more tolerant," Mark Wivell said.

Board members told FOX43 in a statement that it was “unfortunate” they were being portrayed as Scrooge.

“It is, indeed, unfortunate that our attention has been unnecessarily redirected in this manner with a suggestion that Scrooge is alive and well in our community,” the statement read. “Many of our families will be in church on Monday with their spirit diminished by this attack.”