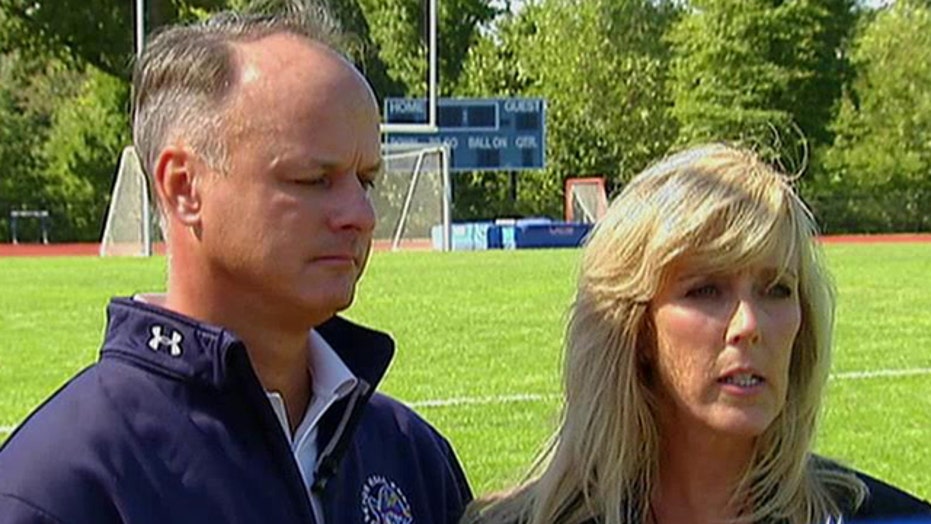 Exclusive: Tevlin's parents on the night of his murder

Parents of New Jersey college student gunned down in case of suspected jihad revenge reflect on the fateful night they were told, 'It's Brendan. ... He was murdered.' #BrendanTevlin

The parents of a New Jersey college student gunned down by a self-proclaimed homegrown jihadist who is a suspect in three other murders told Fox News, in an exclusive interview Wednesday, that they don’t believe the killer acted alone, but are unsure if their son is a victim of domestic terror.

Allison and Michael Tevlin, whose son Brendan was shot eight times June 25 while idling in his Jeep at a red light in West Orange, told Greta Van Susteren they don’t know what to make of suspect Ali Muhammad Brown’s claim that he killed their son to avenge U.S. military action in Iraq and Afghanistan. The murder has been characterized by some as a case of domestic terror, but it remains unclear if Brown, who was once linked to a suspected terror financing scheme, was a “lone wolf” inspired by jihadist rantings or part of a larger plot.

“I don't think it makes that much of a difference at this time,” Allison Tevlin said on Fox News’ “On the Record w/Greta Van Susteren.” “I think he murdered Brendan and he murdered several others and he is an American. He did what he did. And like I said, he didn't act alone, so I don't know if I -- we have all the information or enough information to make that kind of judgment; it's not really for us to make that judgment.”

Brendan Tevlin, who had finished his first year of college at University of Richmond, in Virginia, was an exemplary son who “would always do the right thing,” his mother said. The oldest of three, he was a Eucharistic minister, president of the Gaelic Club and a talented bagpiper who often volunteered to play at funerals. In high school, he was an honor student and member of the student council and lacrosse team.

His suspected killer told police that murdering Brendan was a “just kill” and that he was seeking vengeance for Muslim deaths in “Iraq, Syria, (and) Afghanistan.” Brown, 29, is a convicted sex offender who has also been charged with killing three men in Seattle earlier in the summer.

Prosecutors in New Jersey, where Brown was arrested July 18, say Brown is a devout Muslim enraged by U.S. military intervention in the Islamic world, which he referred to as “evil.”

“During the interview, Brown also stated that, as part of his beliefs, if a ‘man sees evil, then he must take action against that evil,’” according to court papers.

Investigators in Essex County, N.J., have characterized Tevlin’s murder as a robbery that turned violent. Three other men, including Brown’s co-defendants Eric Williams and Jeremy Villagran, fled while Brown moved Tevlin’s body into the passenger seat and drove to a nearby apartment building where he abandoned it.

Brown was homeless and has a lengthy criminal history dating back more than a decade. He was arrested in Seattle in 2004 along with 13 other members of an alleged bank fraud ring, which federal investigators believed sent money to terrorist groups. A year later, he pleaded guilty to one count of conspiracy to commit bank fraud, and was released with credit for time served.

Brown is currently being held at the Essex County Jail in Newark on $5 million bail, and could face extradition to Washington, where he could face the death penalty if convicted.

For the Tevlins, the question of whether their son was murdered in an act of domestic terrorism or simply in a random act of horrific violence is for authorities to answer.

“I really haven't thought too much about the people who did this,” Michael Tevlin said. “We have been trying to just stay positive and think about, you know, how to remember Brendan.

“Law enforcement is going to come to a conclusion and they are working very hard on it,” he added. “I guess that's when we are all going to find out the truth of what happened.”