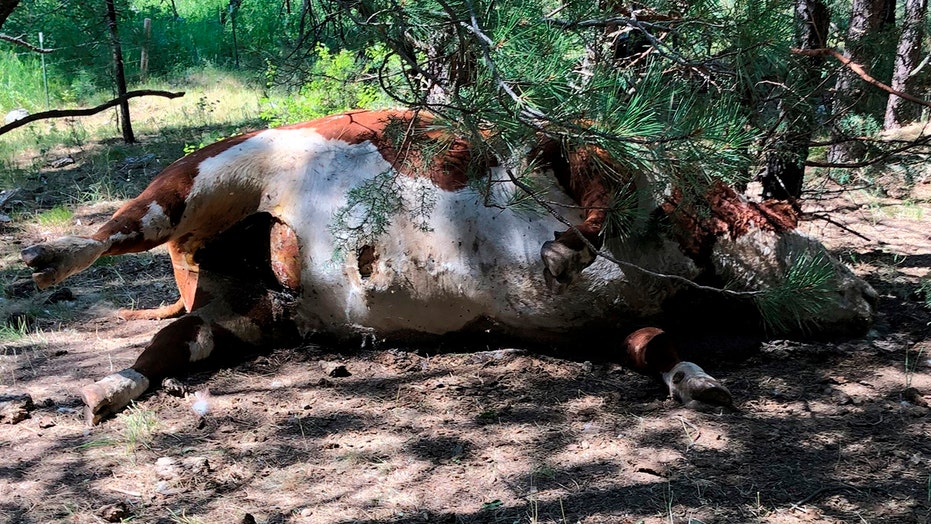 The mysterious mutilations of five bulls found dead on an Oregon ranch in late July have investigators wondering whether a cult carried out the cattle killings as part of a twisted ritual.

All five seemingly healthy Hereford bulls, found dead within days of each other, were drained of blood. Their sex organs and tongues were removed with surgical precision. None of the scenes showed signs of a struggle and officials found no footprints, Silvies Valley Ranch Vice President Colby Marshall told the Oregonian last month.

Marshall has come up with his own theory in the months since, telling The Associated Press on Wednesday that “we think that this crime is being perpetrated by some sort of a cult.”

Marshall, pictured on his ranch in Burns, Ore., believes a cult is behind the bull deaths. He doesn't think the killings were done to financially harm the ranch. (David Zaitz/Silvies Valley Ranch via AP) File

Individually, each case could be attributable to natural causes. When an animal dies, the blood pools at the bottom of the carcass and it bloats. The skin dries out and splits with tears that can often appear surgical. Scavengers like carrion bugs and birds prey on what soft tissue is left.

But as the carcasses piled up, officials began to suspect that people killed the 2,000-pound bulls.

“To lose a completely healthy animal would be an oddity,” Marshall said. “To lose five young, very healthy, in great shape, perfect bulls that are all basically the same age...that is so outside the bounds of normal activity.”

Marshall speculates the bulls were knocked unconscious with a tranquilizer dart. While some people acted as lookouts, others bled the animals out by inserting a large-gauge needle into the tongue and into an artery, then removed the organs after the heart stopped beating, he surmised.

Authorities suspect the bizarre deaths and mutilations were human-caused, but have no leads. (Silvies Valley Ranch via AP)

Harney County Sheriff’s Deputy Dan Jenkins appeared to agree with Marshall’s theory, saying the apparent killings may be part of some “occult” ritual.

“Personally, I would lean more toward the occult, where people for whatever reason – whether it's a phase of the moon or whatever rituals they're going to do with their beliefs – are coming to different areas and doing that,” he said.

Without any witnesses, the investigation has so far only yielded theories and dead ends. Local residents have suggested theories ranging from UFO abductions to people trying to hurt the ranch financially. Marshall said he doubts the killings were done out of malice.

The case recalls mutilations of livestock across the U.S. West and Midwest in the 1970s that struck fear in rural areas. Thousands of cattle and other livestock ranging from Minnesota to New Mexico were found dead with their reproductive organs and sometimes part of their faces removed.

The Oregon Cattlemen’s Association is offering a $1,000 reward for information leading to the conviction of those responsible. The ranch is offering $25,000.