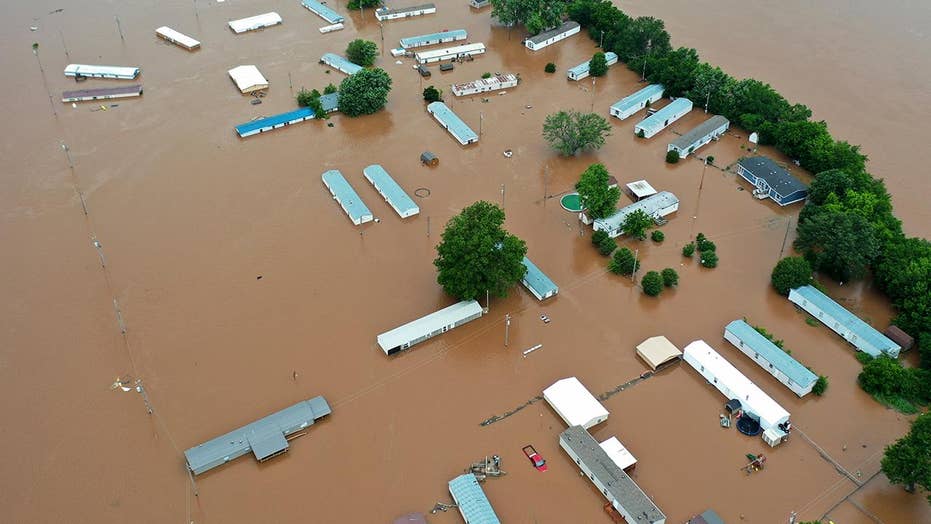 Rebecca Smith says flooding in Braggs from the Arkansas River is worst in living memory.

TULSA, Okla. – Some much-needed sunshine glistened down on the flood-ridden communities in and around Tulsa, Oklahoma on Friday – only the worst may be yet to come amid unprecedented rain and flooding.

The extreme burden that has been put on the aging and antiquated levee system in the region means the threat of a break is at a critical juncture.

“The most dangerous time for a levee system is when the water is going down. You have all this soil which has had tremendous pressure on it from the water, and it has become saturated with water, when that water goes down you start to see the levee system erode away into the river current,” Tulsa Mayor G.T. Bynum told Fox News Friday. “In some areas, thousands of people live behind these levees so we have National Guard soldiers monitoring the levees 24 hours a day to check for signs of erosion. The Army Corps of Engineers is moving in to repair any erosions that start to occur or any weaknesses that appear.”

And a daunting stretch of even more unknowns lies ahead with another week of rain poised to begin again Monday.

“The real challenge is that presented to us we have levee system that is our now weakened having experienced an unprecedented rain on it which it has had over the past two weeks now,” Bynum said. “And our lake that protects Tulsa from flood waters is still about a foot above the flood pool it doesn’t have the kind of storage capacity that it needs to protect our community from flood waters.”

Yet it is not only the wrath of mother nature that locals are being forced to contend, with officials raising concerns over those close to the levees or in danger zones refusing to leave.

“There are a lot of people who live in areas that we have recommended they evacuate – either behind the levees where it is very high risk to be back there if something goes wrong. With those levees you have minutes to relocate, not hours,” Bynum stressed. “Then we have other areas where we knew flood waters were rising and we sent police officers to recommend people to relocate and they would not leave because they were afraid that looters would come through and steal their possessions while they were gone.”

Subsequently, Tulsa has had to up its police presence this past week, especially in neighborhoods where authorities have urged or are continuing to urge residents to leave.

“But for some people that fear of being robbed while you are away from your home for a long period of time is preventing them from moving to a safer place,” Bynum continued. “We have arrested a  number of individuals who have attempted to loot during this event, and I am glad we have them behind bars.”

Homes are flooded near the Arkansas River in Tulsa, Okla., on Friday, May 24, 2019. (Tom Gilbert/Tulsa World via AP)

The focus of the perpetrators is said to be on pilfering personal property from private homes rather than livestock. The Tulsa Police Department and County Sheriff’s office did not immediately respond to a request for further comment, but Bynum insisted that the upped police presence has been eased by outside assistance.

“We have been very fortunate that we have received support from out-of-state agencies. We have agencies in from Oklahoma City and from Texas, who have both come in here because they have said ‘when we have problems in our communities, Tulsa you have been there for us and now we want to be there for you,’” he noted. “That has helped us relive some of the strain on our first responders, but our teams are working 24 hours a day, we are working 12-hour shifts, two 12-hour shifts on and off every single day.”

Meanwhile, further downstream the Port of Muskogee remains submerged in the Arkansas River and under the close watch of authorities. A famed WWII submarine – which hasn’t been dipped in water for some 33 years – is once again afloat in the flood’s remnants. The threat lingers that the historic Air Comfort Solutions Chopper U.S.S. Batfish could break away should the weather worsen in the coming weeks.

And scattered in and around the river, there are indeed tens of thousands in desperate need for security and aid. There are entire communities are completely severed from civilization and islands of their own, accessible only via boat, and left to pick up the pieces of their rain-battered livelihoods.

A famed WWII submarine could break away if the weather worsens in the coming weeks. (Fox News/Hollie McKay)

“There is no question that the areas that have been hit the hardest from this flooding are rural areas that haven’t had the opportunity to build up the kind of infrastructure that we have in Tulsa to protect ourselves from this flooding,” Bynum added. “The one thing we all share is we want to stop raining and give this water a chance to drain out.”

But as of right now, such a want remains in the realm of wishful thinking.