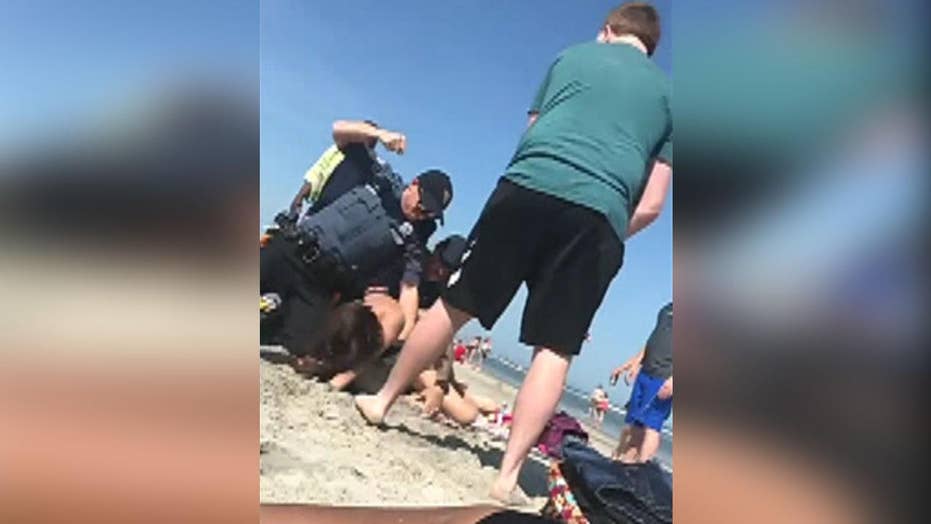 A Twitter video shows police officers wrestling a woman to the ground and punching her in the head at Wildwood beach.

Officers involved in a violent scuffle with a 20-year-old woman suspected of underage drinking at a New Jersey beach — an incident caught on video — were “reassigned to administrative duty pending the outcome of a full and thorough investigation,” officials said Sunday.

Video of the arrest Saturday went viral showing a Wildwood Police officer punching Emily Weinman of Philadelphia twice — once in the head and once in the neck — and putting her in a chokehold. Voices in the background could be heard shouting, “Stop resisting,” according to Fox 29.

The police department issued a statement about the arrest on Facebook Sunday, noting: “While Chief [Robert Regalbuto] finds this video to be alarming, he does not want to rush to any judgment until having the final results of the investigation.”

Weinman is facing multiple charges, including two counts of aggravated assault on an officer and being a minor in possession of alcohol.

She posted about the incident on Facebook, which went viral before being taken down.

“I asked them don’t they have something better to do as cops than to stop people for underage drinking on the beach,” she wrote.

“Honestly, I can say if I took even a sip, then I would’ve gave them my information and called it a day; I’m underage, so I know better,” she wrote, according to The New York Post.

“I know I should’ve gave him my name,” Weinman wrote. “I was partly wrong in a way but I was scared.”

She noted: “I tripped and fell and the cop tackled me to the ground and smashed my head into the sand.”

“But this whole situation was handled wrongly and blew out of proportion all because these pigs didn’t do their jobs the way they were TRAINED to do so.”

“It wasn’t just that this officer decided to beat her up,” he said. “That wasn’t the case.”

He added: “We don’t like to see anyone get hit, period. But then again, when you have someone who’s aggressively attacking you or spitting at you. … I wasn’t there. I don’t know.”