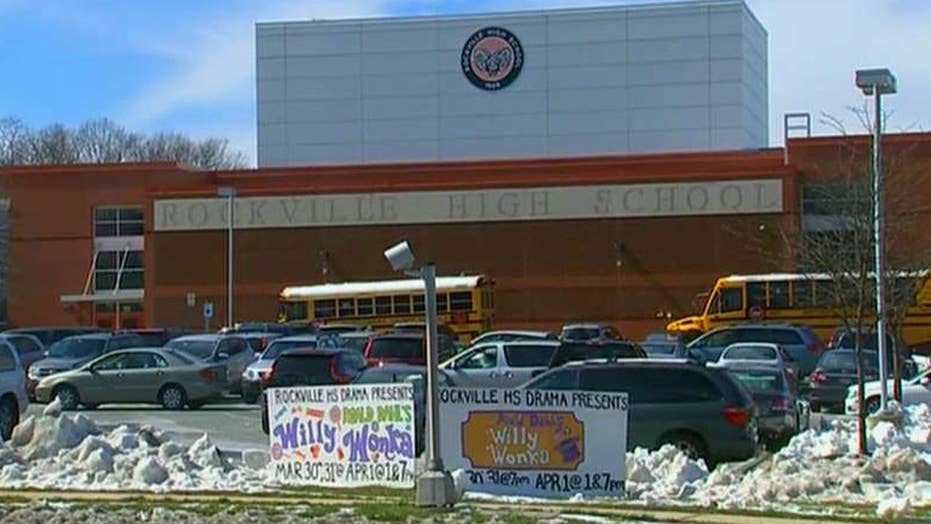 Rockville resident who has campaigned against possibility of Maryland becoming a sanctuary state is stunned by the alleged rape of girl by two high school boys, one of whom was slated for deportation #Tucker

New, brutal details emerged Monday in the alleged rape of a 14-year-old girl at a Maryland high school by two male students, at least one of whom was in the country illegally.

The unidentified student at Rockville High School in Rockville, Md. was violently raped, sodomized and made to perform oral sex in a campus bathroom stall by the two males, according to court records.

Jose O. Montano, 17, from El Salvador, and Henry E. Sanchez-Milian, 18, from Guatemala, were charged with first-degree rape and two counts of first-degree sexual offense after they allegedly attacked the girl at 9 a.m. last Thursday.

“Montano asked the victim again and then forced her into a boy’s bathroom and then into a stall. Montano and Sanchez both raped the victim inside the bathroom stall.”

Court records describe the merciless and brutal assault by both Montano and Sanchez, who allegedly raped the young girl multiple times, vaginally, orally and sodomized her, as they spoke to each other in Spanish. Blood and male fluids were recovered from the scene by a forensic expert, court records show.

The victim knew just one of her alleged attackers, court record show.

According to U.S. Department of Homeland Security databases, a Border Patrol agent stopped Sanchez-Milian in August 2016 in Rio Valley Grande, Texas, and determined he’d entered the country illegally from Mexico.

Sanchez-Milian was ordered to appear before an immigration judge, but the hearing had not yet been scheduled.

He has has no previous encounters with U.S. Immigration and Customs Enforcement (ICE), a spokesman from the agency said.

ICE has since lodged an immigration detainer against Sanchez-Milian. The agency places detainers on individuals arrested on local criminal charges and who are suspected of being deportable, so that ICE can take custody of those individuals when they are released from local custody.

No information was released on 17-year-old Montano, other than his name, because of privacy restrictions related to him being a minor, an ICE spokesman confirmed.

However, The Washington Post reported Montano is a citizen of Guatemala.

All of the students are in the ninth grade, according to Fox 5 DC.

The station reported the judge who oversaw the alleged attackers’ bond hearing refused to release them on bail, because both students are “dangerous and flight risks.”

Montgomery County State’s Attorney’s Office spokesman Ramon Korionoff told NBC News, “These are very serious allegations carrying a life sentence. The potential of life in prison would be available as we prosecute these individuals.” Both Montano and Sanchez will be tried as adults.

The incident is horrifying, devastating for the young girl, and “disturbing on so many levels,” said Jessica Vaughan, the director of policy studies for the Washington, D.C. based Center for Immigration Studies.

She said the Obama administration, and its “disastrous handling” of the surge of illegal aliens arriving from Central America, is partially to blame, noting at least one, and possibly both of the youths were part of that surge.

“The surge of Central American kids has become a significant problem in many of the school districts where they are allowed to resettle,” Vaughan said.

Montgomery County has one of the “more notorious sanctuary policies”, Vaughan said, and the police deliberately do not cooperate with ICE.

“The result is that many gang members and other thugs and miscreants are allowed to remain in the county in defiance of immigration laws and causing problems like this,” Vaughan said, noting that just this week the city of Rockville was considering adopting its own sanctuary policy.

“Montgomery, like others that have absorbed a large number of the Central American youths, has experienced a noticeable uptick in violence that has been attributed to gangs like MS-13, and this has been especially acute in the high schools,” Vaughan said. “This is one of the worst case scenarios that was bound to happen, and it’s not an isolated case.”

A spokeswoman for the Montgomery County Public Schools wrote a letter to parents to inform them of the incident. She said ensuring a safe, secure and welcoming learning environment for all of their students is a “top priority.”

“Our staff remains vigilant in the monitoring of our school each and every day. Please remind your child that if they believe they are a victim of an assault or see something inappropriate, they should immediately tell a staff member,” said Gboyinde Onijala, Senior Communications Specialist, with the Department of Public Information and Web Services at Montgomery County Public Schools.