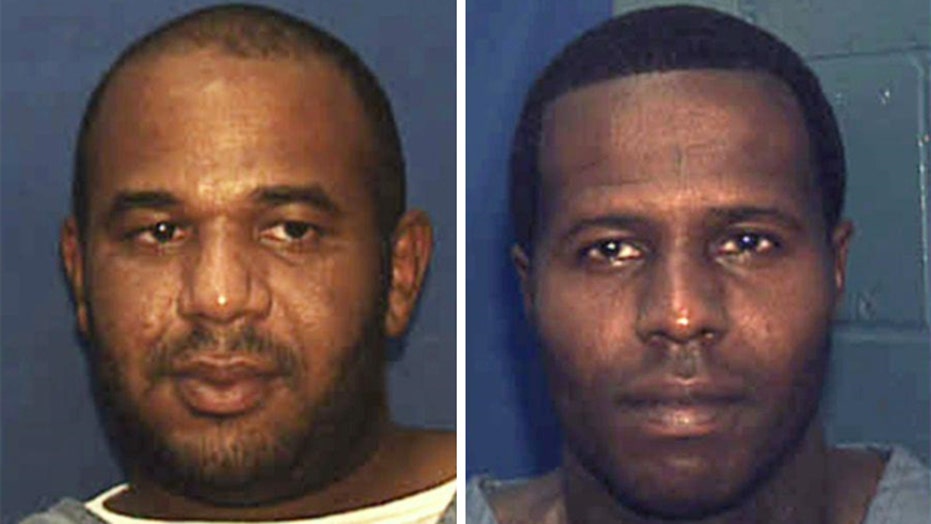 Escaped Florida inmates back behind bars

Investigation turns to the forged documents they used to escape

Authorities say there will be “more arrests” after police caught two convicted murderers Saturday who were mistakenly released from prison with the help of forged paperwork.

The Florida Department of Law Enforcement, along with the U.S. Marshall's Service have arrested escaped inmates Charles Walker and Joseph Jenkins, both 34, according to a press release issued Saturday evening.

Jenkins and Walker were apprehended Saturday evening at a motel in Panama City just a few hours after their family members held a news conference urging the men to turn themselves in.

"While the manhunt is over, there is still a lot that we do not know. I can tell you, there will be more arrests," Florida Department of Law Enforcement Commissioner Gerald Baily told a news conference Sunday. Bailey said authorities will be interviewing the two prisoners all day. "We will be backtracking to those who helped carry out this fraud and along the way we will be looking closely at anyone who may have helped harbor these fugitives."

Bailey said there is “speculation” that the men paid someone $8,000 for the fake documents, but he said he wasn’t sure whether or not the person is operating inside the prison system, the Orlando Sentinel reports.

"...The documents themselves looked good, they looked official,” he said.

Both men appeared in front of a judge Sunday and are being held without bond. They are scheduled to appear back in court on Oct. 25.

According to a Bay County Sheriff’s office press release, Jenkins and Walker, who are serving life sentences, were captured without incident:

“About 20 members of the task force surrounded the room and a message was sent using a PA system instructing Jenkins and Walker to come out. About a minute later, both men exited the room with their hands in the air and were taken into custody without incident,” the statement read.

A woman who answered the phone at the motel said she saw police coming and they went into room 227. After authorities had left, the parking lot of the two-story motel next to Big Willy's Swimwear was mostly empty. Authorities think the men had been in the area since Wednesday.

The two prisoners had not been traveling together, but hooked up once word of the forgeries became public and traveled from Orlando to Panama City, said Frank Chiumento, chief of the U.S. Marshals Service for Florida and the Caribbean.

Chiumento told The Associated Press on Sunday that Jenkins and Walker knew their time on the run was limited once their ruse had been uncovered. They were under surveillance for about two and a half days, and the men were surprised when authorities finally knocked on their motel door.

Bailey said authorities were able to track down the men through interviews with people who visited them at the prison, called them there or made deposits into their canteen account. Those people included relatives, ex-girlfriends and others, he said.

"The key piece of this was an individual or individuals that had made deposits into their canteen accounts at the prison," Bailey said.

Jenkins and Walker were both serving life sentences at the Franklin Correctional Facility in the Panhandle before they walked free without anyone realizing the paperwork, complete with case numbers and a judge's forged signature, was bogus. The documents seemingly reduced their life sentences to 15 years.

Jenkins was found guilty of first-degree murder in the 1998 killing and botched robbery of Roscoe Pugh, an Orlando man. It was Pugh's family that contacted the prosecutor's office earlier this week and told them Jenkins had been released, setting off a manhunt.

The prosecutor's office also discovered Walker had been mistakenly released. Walker was convicted of second-degree murder in the 1999 Orange County slaying of 23-year-old Cedric Slater.

Jenkins was released first on Sept. 27. His uncle and father figure, Henry Pearson, said when prison officials called him in Orlando he jumped in the car with fresh clothes for Jenkins and picked him up from prison.

He drove him to see his mother and grandmother. Jenkins hung around Pearson's home for some days and registered as a felon Sept. 30 at an Orlando jail, as he was required by law. He filled out paperwork, had his photograph taken and his fingerprints were checked against a database to make sure he didn't have any outstanding warrants for his arrest.

The Orange County jail official who interacted with him had no idea he was supposed to be locked up, Sheriff Jerry Demings said.

Pearson planned a birthday party at his home for Jenkins a few days later, but he never showed up. Jenkins turned 34 on Oct. 1.

About a week later, on Oct. 8, Walker was let out of the same prison when similar legitimate-looking documents duped prison officials. His mother, Lillie Danzy, said the family thought their prayers had been answered when she got a call saying her son was being released. She called prison officials back to make sure it was actually happening.

There wasn't time to pick him up, so prison officials took him to a bus station, gave him a ticket — as they would any other ex-inmate — and sent him along.

Walker went to church last Sunday, and his mother said they have been cooperating with authorities and made no attempts to hide him.

In light of the errors, the Corrections Department changed the way it verifies early releases and state legislators promised to hold investigative hearings.

The Corrections Department said on Friday it verified the early release by checking the Orange County Clerk of Court's website and calling them.