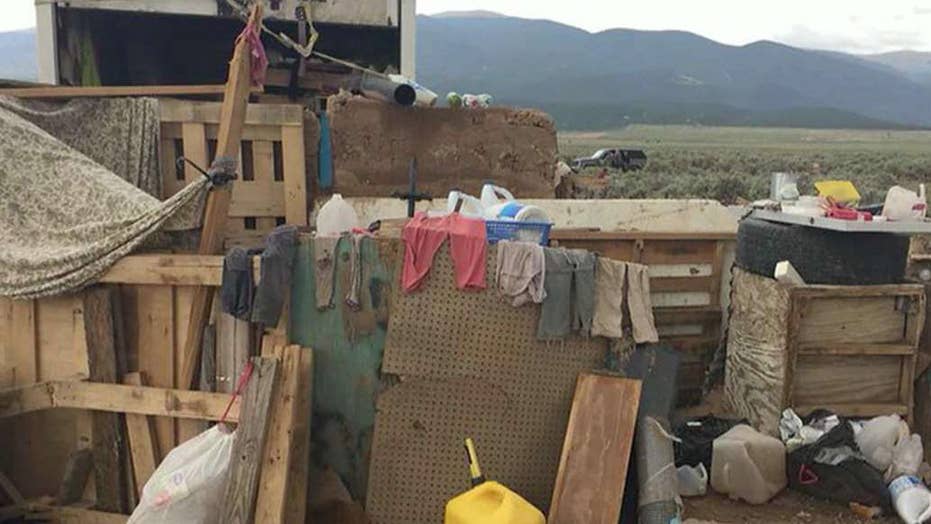 11 children rescued from heavily-armed compound built out of garbage.

The three mothers of the 11 malnourished children found living in a filthy New Mexico compound were arrested and charged Sunday along with two men described as armed Muslim “extremists” after authorities raided the property in search of a 4-year-old boy.

Jany Leveille, 35; Hujrah Wahhaj, 38, and Subhannah Wahhaj, 35, were arrested and charged with neglect and child abuse of the children. The three women, who were found at the compound in Amalia, initially refused to answer any questions.

Authorities raided the compound Friday as part of their search for 4-year-old Abdul-Ghani Wahhaj, who vanished last December. Abdul-Ghani’s mother reported her son missing after Wahhaj took the boy, who turned 4 on Monday, to the park in Clayton County, Ga., and didn't return, The Albuquerque Journal reported. She added the boy suffers from a medical condition.

Officials didn’t find the 4-year-old at the makeshift compound, but discovered the children — ranging from ages 1 to 15 — living in what Taos County Sheriff Jerry Hogrefe described as “the ugliest looking, filthiest” living conditions he’s witnessed. He added that he only saw a few potatoes and a box of rice.

Law enforcement officers searching the compound for the missing child didn't locate him but found 11 other children in filthy conditions and hardly any food, a sheriff said Saturday. (Taos County Sheriff's Office)

Hogrefe said authorities had conducted surveillance of the compound while looking for the missing boy before he decided Thursday to get a search warrant immediately after a Georgia investigator forwarded a message in which someone at the compound reportedly told another person that people at the compound were starving and needed water.

“The message sent to a third party simply said in part, ‘We are starving and need food and water,’” Hogrefe said. “I absolutely knew that we couldn’t wait on another agency to step up and we had to go check this out as soon as possible.”

The children ranging in age from 1 to 15 were removed from the compound and turned over to state child-welfare workers. (Taos County Sheriff's Office)

Hogrefe said they found the “occupants were most likely heavily armed and considered extremist of the Muslim belief.”

When police arrived at the scene, Wahhaj was armed with an “AR-15 rifle, five loaded 30-round magazines, and four loaded pistols, including one in his pocket,” according to Hogrefe.

Police said Sunday they are still looking for Abdul-Ghani. Though the five adults refused to provide any information, investigators believe the boy was at the compound in recent weeks.