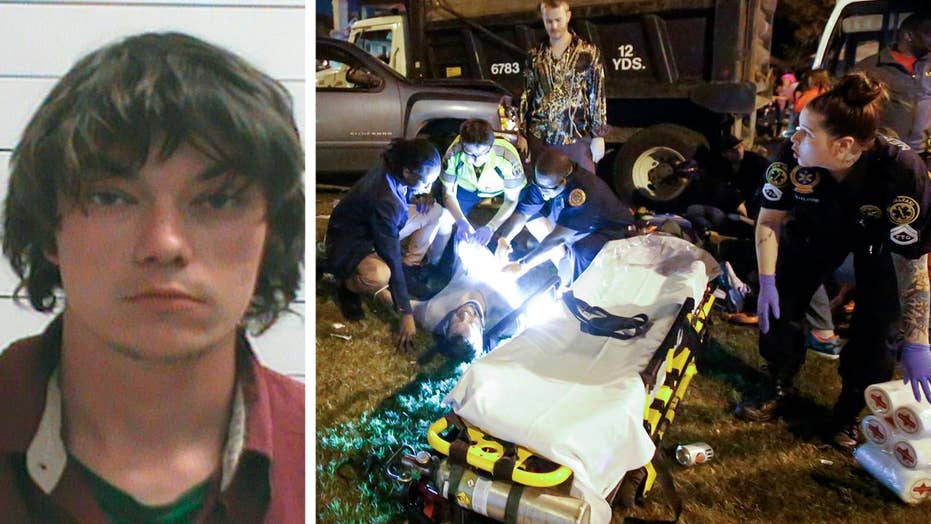 Will Carr reports from New Orleans

The New Orleans Police Department issued a statement identifying the man as 25-year-old Neilson Rizzuto. He's being held at the city's jail on charges of first-degree negligent vehicular injuring, hit-and-run driving causing serious injury and reckless operation of a vehicle.

The accident happened Saturday during one of the busiest nights of Mardi Gras when thousands of people throng the streets of Mid-City to watch the elaborate floats and clamor to catch beads and trinkets tossed from riders.

Police said Sunday that 28 people were hurt in the accident that sent 21 people to the hospital; an additional seven people at the scene declined medical help. At least three victims remained hospitalized overnight with moderate to serious injuries, police said Sunday. There were no fatalities.

Ages of the victims ranged from 1 year old to patients in their 50s, police said.

"We suspect that that subject was highly intoxicated," Police Chief Michael Harrison had said on Saturday evening.

Harrison was asked by the media if terrorism was suspected. While he didn't say "No," he did say it looks like a case of DWI.

Rizzuto is being held on $125,000 bond in a New Orleans jail, The Advocate reported. Commissioner Robert Blackburn said if Rizzuto makes bond he would be placed under house arrest, forced to wear an ankle monitor and would be prohibited from driving.

The commissioner told Rizzuto, who was handcuffed and wearing an orange jumper, that he was setting the bail for an amount he "envisioned" for about 21 counts — referring to the number of people who went to the hospital.

Rizzuto's father told WWL-TV that he was still trying to understand what happened and that his son is a "good kid." John Rizzuto told the station he spoke with his son multiple times Sunday morning and that his son said "a stranger gave him a drink off the street and that's the last thing he remembered."

Among the injured was one New Orleans police officer. Harrison said Saturday night the officer, who was on duty, was undergoing tests to determine the extent of her injuries. She was in "good spirits," he said.

Saturday night's parade was put on by the Krewe of Endymion, which is known for its long, elaborate floats and the big party it hosts at the Superdome after the parade.