Pandemic at the disco?

Viral videos of packed partying underway at waterfront clubs in Missouri’s Lake of the Ozarks led to a spike in tourism amid the coronavirus crisis -- but not in new cases, according to a local mayor.

“You just think about what this has done for our economy and you just go, ‘Thank you folks,’” Lake Ozark Mayor Gerry Murawski told local media.

In other parts of the country, the bar and restaurant industries have been decimated by coronavirus closures.

Missouri saw more than 1,000 new cases of COVID-19 on Monday alone, the outlet reported. And there were at least 1,200 new cases Tuesday, according to state health officials. But the three counties bordering the lake together have fewer than 500 cases out of more than 55,000 in the state since the beginning of the pandemic.

Saturday’s event, an electronic dance music party, went on despite the originally scheduled performer’s cancellation, according to a post on the Shady Gators’ Facebook page. The host venue found a replacement and went on with the show.

Revelers celebrate Memorial Day weekend at Osage Beach of the Lake of the Ozarks, Missouri, U.S., May 23,  in this screen grab taken from social media video and obtained by Reuters on May 24.

In a post last week on the modified performance, Shady Gators said it was operating at half-capacity, even though as an outdoor bar it is not required to do so.

“An entire paramedic team” was on hand to give temperature checks to all visitors. Attendees were all provided with hand sanitizer, and a three-person team was tasked with cleaning “high traffic areas” and the venue’s bathrooms throughout the event.

Masks were “encouraged but not required.”

Shady Gators’ website advertised more weekend events. It has posted videos from other events to its Facebook page. Some show people who appear to be somewhat socially distanced from one another, but most are not wearing masks.

Murawski credited the media coverage and publicity of the lake’s waterfront bars for the surge in tourists, which he said surpassed 9.1 million visitors as of July.

And despite the increase in tourism, Murawski said the community has not seen a spike in coronavirus cases.

“We were worried – we thought two weeks after that [Memorial Day weekend] our counts are going to go up,” Murawski told Fox 4. “But they didn’t at all.” 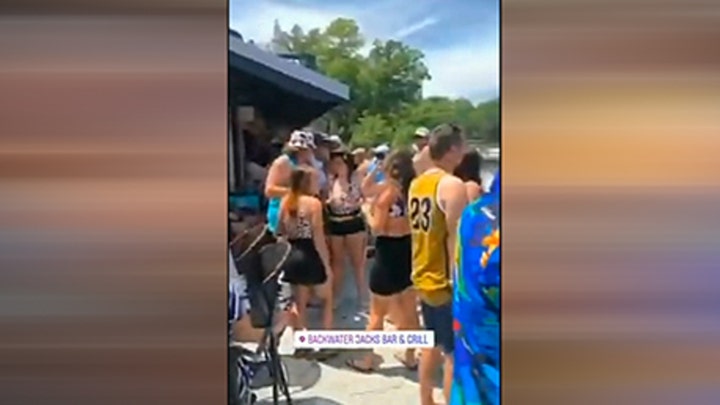 But about 180 miles east, St. Louis County Executive Sam Page, who is a doctor, said this week that some cases in his county have been traced back to the lake, the outlet reported.

Page criticized the Memorial Day video as "reckless behavior" and issued a travel advisory urging St. Louis residents who visited the Lake of the Ozarks to self-quarantine for 14 days.

“Social distancing is not a crime, and therefore, the sheriff’s office has no authority to enforce actions in that regard,” he said in a statement posted to his office’s Facebook page.

Although Missouri’s coronavirus guidelines are less restrictive than in some other states, Gov. Mike Parson is encouraging residents to observe social distancing, wear a mask and wash their hands.

“We need EVERYONE to take COVID-19 seriously, no matter how old you are,” he tweeted Wednesday.