Hurricane Florence late Wednesday was downgraded to a Category 2 storm, but it is still considered an extremely dangerous storm that could hit the East Coast with an historic surge.

Florence's nighttime winds were down to 110 mph from a high of 140 mph.

NOAA's National Weather Service said in a tweet that its "weakening" only refers to maximum winds. The wind field has expanded and "storm surge potential are still at catastrophic levels."

President Trump on Wednesday said that as Hurricane Florence makes its way toward the U.S., "protection of life is the absolute highest priority."

More than 10 million people were under storm watches and warnings on Wednesday as Hurricane Florence — described as “the storm of a lifetime."

Paper claims President Trump is playing down humans' role in increasing extreme weather risks; reaction and analysis on 'The Five.'

Florence was approximately 235 miles off Wilmington, North Carolina, and roughly 280 miles east-southeast of Myrtle Beach, South Carolina, as of 2 a.m. ET, according to the NHC.

The center says the storm is moving northwest at 16 mph, and has maximum sustained winds of about 115 mph.

North and South Carolina, along with Virginia, Maryland and Georgia, remain under states of emergency ahead of the “Mike Tyson punch” of a storm’s expected landfall in the U.S. later this week.

Forecasters predict the storm will make landfall Thursday night or sometime on Friday. 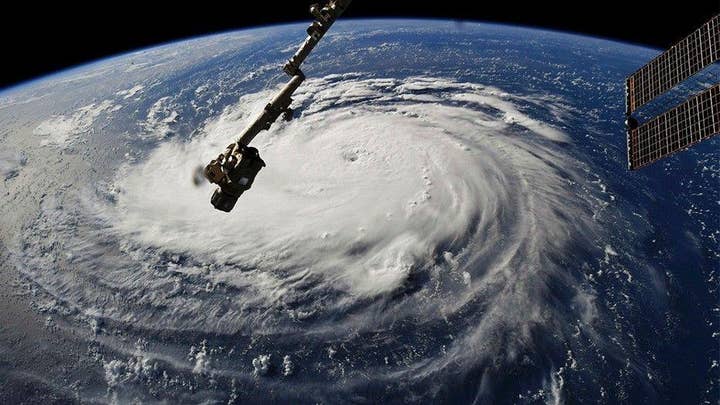 AHEAD OF HURRICANE FLORENCE, CAROLINIANS IGNORE CALLS TO EVACUATE FOR FINANCIAL, EMPLOYMENT REASONS

The hurricane could also produce heavy and excessive rainfall — up to 40 inches in isolated areas in the Carolinas and anywhere between 6 to 12 inches elsewhere in the Appalachians and Mid-Atlantic region.

It will also pass directly over two nuclear power plants — the Brunswick Nuclear Plant, which is located 30 miles south of Wilmington, as well as the Shearon Harris Nuclear Plant in New Hill, about 23 miles from Raleigh.

The National Weather Service said Hurricane Florence will likely be “the storm of a lifetime” for portions of the Carolina coast.

A few tornadoes are possible in eastern North Carolina through Friday, the NHC reported.