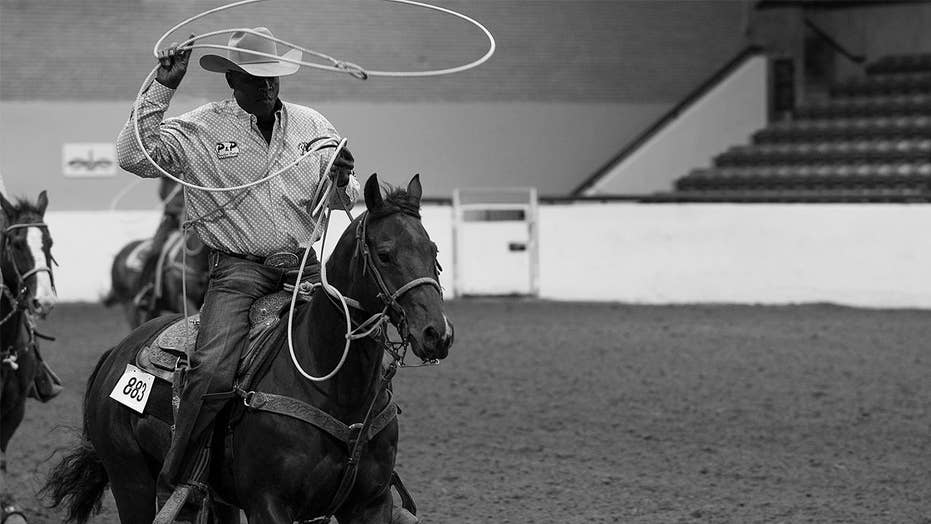 HOUSTON -- Fred Whitfield spent Thursday afternoon signing autographs and taking photos with fans at the Houston Livestock Show and Rodeo. The semi-retired ProRodeo Hall of Famer was due to compete in a tie-down roping competition in the evening, and some fans couldn’t pass up the opportunity to say hello.

“My father was a big fan of yours,” said one, shaking Whitfield’s hand.

Whitfield has won the Professional Rodeo Cowboys Association World Championships eight times and has raked in more than $3 million in a career that has spanned more than 26 years.

Fred Whitfield (left) has won the Professional Rodeo Cowboys Association World Championships eight times. He has been considered a "trailblazer" for African-Americans wanting to join the sport.  (Fox News)

And, in a sport where only about 5 percent of professional competitors are African-Americans, many see Whitfield as a trailblazer, a title he’s weary to accept.

“There were guys that came into the sport before me, African-Americans. I learned from Calvin Greely, Sedgwick Haynes,” said Whitfield.

But others said Whitfield’s prominence has encouraged more African-Americans to join the sport.

“Fred Whitfield brought out a lot of black cowboys. I mean, they all want to be Fred Whitfield,” said Larry Callies, owner of the Black Cowboy Museum in Rosenberg.

Callies opened the museum a year and a half ago, driven in part by religion (“God asked me to open up this museum") and a motivation to share the hidden history of black cowboys.

He said the first cowboys started working in Fort Bend County in the greater Houston area.

But, Callies and Whitfield believe money stopped more people from jumping in professionally.

“To make it in the pros, you need to have a lot of money. The American cowboy, he has to foot his own bill, and most of the black cowboys don’t have the money to travel to do what the white cowboys could do,” said Callies.

Whitfield said a competitor could pay up to $500 to join the PRCA. A horse could cost an additional $125,000. He credited a sponsor for helping start his career since he grew up poor and learned how to rope from a neighbor.

“I had a family (the Moffitt family) that said, 'hey, here’s an open check, you need horses, trucks, trailers, whatever you need, it’s available,'” said Whitfield.

Whitfield encourages up-and-comers to work hard, regardless of the color of their skin.  (Fox News)

However, the path to the top wasn’t easy. Whitfield said he faced bouts of racism while competing in other rodeos. Callies, a former country singer and rodeo competitor, said he experienced it, too.

“There were certain places I couldn’t go. Back then, that was normal. I never thought twice,” said Callies.

Whitfield learned to block out most of the negative comments, channeling his efforts instead on winning.

“You have to work your tail off. Whether you’re black, white, green, purple, it doesn’t matter,” he said.

Nowadays, besides competing occasionally, he works for Moffitt Services, owned by the family that helped him get started as a rodeo competitor. He gives private lessons, as well. Whitfield said Rodeo Houston might be his last competition.

For those looking to rise in the business, he wants them to remember one thing.

“Color matters, but then again, it doesn’t matter, if you approach it in the right way, period,” he said.