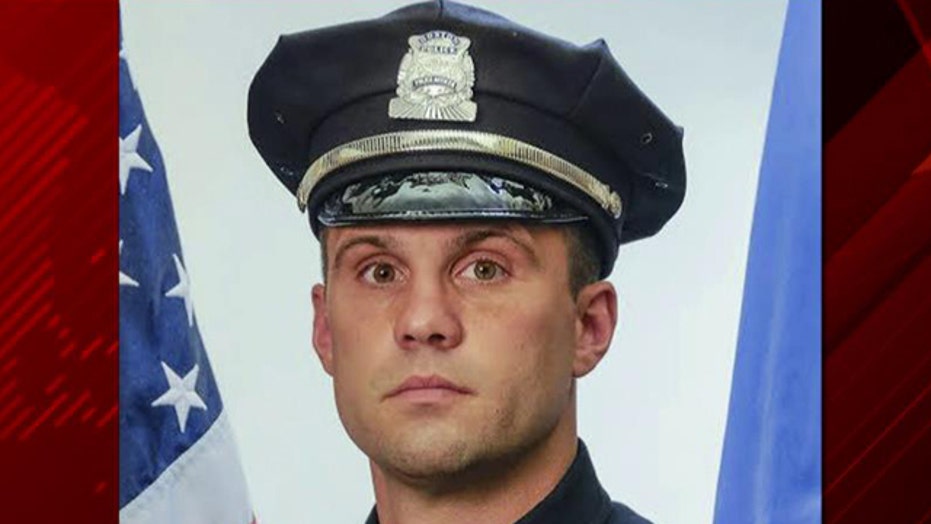 Boston police officer recovering from surgery after being shot in face

A Boston police officer honored for his role in the aftermath of the Boston Marathon bombing was fighting for his life Saturday, a night after he was shot in the face during a traffic stop that ended when other officers shot and killed his attacker, the city's authorities said.

Officer John Moynihan, 34, was struck just below his right eye and the bullet remained lodged below his right ear. He was listed in critical condition and was in a medically-induced coma, Commissioner William Evans said.

"When he initially came in he was responsive, but he's heavily sedated. They basically have him in an induced coma at this time," Evans said, according to MyFoxBoston.com.

"We're not sure of the extent of the damages, they rushed him up for a cat scan and at one point he was rushed to the ER and he was taken out and he's being monitored at this time. He's in tough shape," Evans said.

The commissioner said the officers had blue lights flashing but none had pulled out their weapons. He said video from the scene shows Moynihan approaching the driver's door, and the suspect, Angelo West, 41, of Boston's Hyde Park neighborhood, suddenly pull a gun and shoot him at point-blank range.

Evans said West continued firing at the other officers as he tried to run away, emptying his .357 Magnum handgun, and was killed at the scene when police returned fire.  West had a violent criminal past with several prior gun convictions, according to Evans.

A woman driving by in a car suffered a flesh wound and is recovering was in good spirits, Evans said. Three other officers were taken to a hospital with stress-related problems.

Moynihan, 34, is on the police Youth Violence Task Force and is a highly decorated military veteran, Evans said.

He is a former Army Ranger who served in Iraq in 2006-2007 and was honored at the White House in May with the National Association of Police Organizations TOP COPS award. Moynihan received the award for being one of the first responders in Watertown following the April 2013 shootout with the Boston Marathon bombers.

Moynihan had helped transit police Officer Richard Donohue, who was shot in the leg and nearly bled to death when police tried to apprehend Tamerlan and Dzhokhar Tsarnaev, Lieutenant Michael McCarthy said.

Two other people in the car with West have not been charged in the shooting, Evans said, but are held on unrelated outstanding charges.

District Attorney Daniel Conley said the top prosecutor from his office will investigate the killing of West as state law requires and it will be "completely transparent."

"My thoughts and prayers are with the officer injured tonight, his family and friends and the entire Boston Police Department during this difficult time," Mayor Marty Walsh said in a statement released late Friday. "These acts of violence have no place in our neighborhoods. Our community is stronger than ever, and tonight we are thankful for all of those who put their lives on the on the line every day to protect our city."

Such shootings are rare in Boston, but firearms are a major concern in the city, the commissioner said.

A clergymen and anti-violence leader, the Rev. Mark Scott of the Azusa Christian Community, said he is praying for Moynihan and his family, and for a neighborhood that has been plagued by violence.

"There is much work that people have done with the police that has made our community a lot safer," he said.

Check for updates at MyFoxBoston.com