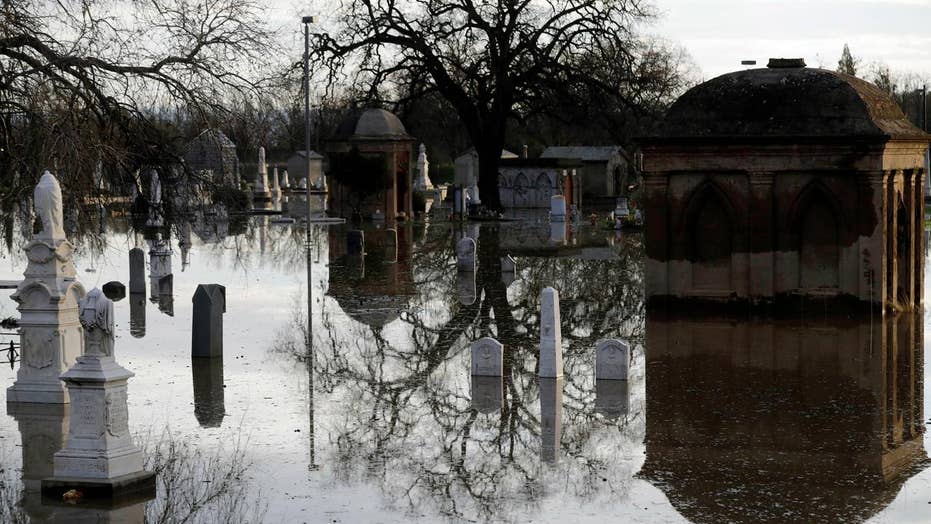 SAN FRANCISCO – Evacuations were ordered in Central California on Monday and flash-flood warnings were issued elsewhere as downpours swelled creeks and rivers to troubling levels in the already soggy region.

People living along a section of the Carmel River in Monterey County were told to leave, as were those in a neighborhood of Salinas near Santa Rita Creek and a few people in rural Royal Oaks, where a mudslide encroached on a home.

The Monterey County Sheriff's Office sent rugged Humvees out to help with the evacuations.

The Carmel River, which has flooded several times in the past month, was expected to rise to nearly 11 feet by Tuesday, which would be a moderate flood stage, while the Salinas River near Spreckels could reach nearly to the moderate flood stage of 26 feet by Tuesday night, which could inundate the Monterey-Salinas Highway, the Monterey Herald reported (http://bit.ly/2kSYbU1).

The Big Sur River reached its moderate flood stage of 10 feet Monday morning and was expected to crest at 12 feet, the paper reported.

"The ground is saturated, and all rainfall at this point is increasing not only the pooling along the lower-lying elevations but also the river levels," said Eric Ulwelling, a division chief with the Monterey County Regional Fire District.

Areas of the county received more than 1½ inches of rain in 24 hours. The National Weather Service said heavy rain could persist into the evening as the latest in a serious of storms hovered over California's northern and central areas, including the San Francisco Bay Area and the Central Valley.

Weather watches and warnings were issued for nearly a dozen counties because of flooding concerns and gusty winds.

"Our community is pulling together like real champs," said San Joaquin River Club resident Paula Martin, who is helping coordinate emergency plans for the private neighborhood of 800 homes.

Martin said the neighborhood has sirens in a clubhouse and church that can warn residents of impending flooding.

Santa Cruz County had seen 2.8 inches of rain in 24 hours and could see up to 8 inches before the storm passes Tuesday. Well over 1½ inches of rain fell in San Francisco.

Forecasters said rainfall in San Francisco has already surpassed the normal annual amount for the wet season that begins in October.

A pre-evacuation advisory was issued for a community in Madera County after water discharges from Bass Lake were increased and threatened to swell rivers, officials said.

The order was issued for several roads near downtown North Fork, about 10 miles from the lake, The Fresno Bee reported (http://bit.ly/2m5S8NG).

Residents should be ready to leave quickly if conditions worsen, the sheriff's office said.

In the mountains, the weather service forecast heavy snow in the Lake Tahoe area with a high avalanche danger until Tuesday in an area of the Sierra Nevada from Yuba Pass to Ebbetts Pass.

Forecasters said the winter storm could drop up to 5 feet of snow in areas above 7,500 feet while lower elevations could see between 8 and 24 inches of snow.

Forecasters advised motorists to avoid travel in the area through Tuesday.

Moderate to heavy rain along with snowmelt below 7,000 feet was expected to swell rivers and streams and increase the chance of flooding.

The San Joaquin River was approaching the top of levees and could remain at that level for four days, said Tim Daly, a spokesman with the San Joaquin County Office of Emergency Services.

"When the water gets that high and more water is coming, there is just too much pressure and levees can break," Daly said. "They can be topped."

The Don Pedro reservoir, which captures water from the Tuolumne River, a key tributary of the San Joaquin, was at 97 percent capacity.

For the first time in more than 10 years, water flowed into Lake Berryessa's unique spillway.

The Monticello Dam Morning Glory Spillway, also known as the Glory Hole, operates similarly to a bathtub drain for the northern California lake.

Elsewhere, the water level kept falling at Oroville Dam, where a damaged spillway had raised major flood concerns and prompted the evacuation of 188,000 people a week ago.