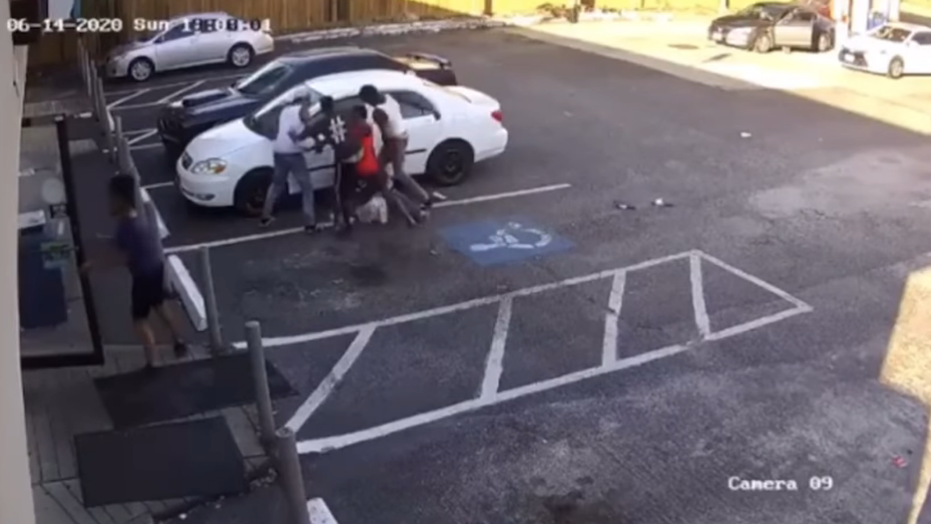 Authorities are looking for multiple suspects captured on video punching and kicking a man outside a gas station convenience store in Texas on Sunday, in what was described as a "brutal attack," police said.

Graphic video shows a customer carrying grocery bags out of the Harris County establishment around 7 p.m., when a group of at least five men attacked, knocked him to the ground, and continued to strike him before fleeing the scene, according to authorities.

TEXAS WOMAN WANTED IN HUSBAND'S 2013 KILLING CAUGHT AT US BORDER AFTER 7 YEARS ON RUN, OFFICIALS SAY

The unidentified victim, 24, informed deputies that he was waiting to buy grocery items at the convenience store when a group of up to six young men tried to cut in line, according to Houston's KTRK-TV.

"I looked over and said, 'There's a line for a reason,'" the victim said. He told police the group mocked his hair and clothes before attacking him when he exited the store.

"I don't know what else I could do," he told KTRK-TV. "The fifth one at the end came out of the store after purchasing goods, and came up to me and kicked me in the face and said, 'Black Lives Matter, [expletive].'"

“They then fled in an unknown direction in a sedan,” Deputy Thomas Gilliland said in a statement to Fox News. “The male suffered a swollen lip and a small laceration over his eye. He refused EMS treatment.”

"He knew he was outnumbered and there was nothing he could really do so he had to absorb the beating as best he could," Sheriff Ed Gonzalez told Fox News. "The girlfriend of the victim indicated that the basis of it that the victim was really just standing his ground, and that was really the crux of the whole issue. We don't know necessarily that it was racially motivated."

"Our goal is to hold them accountable and make sure that we can pursue the filing of charges with the District Attorney’s office," Gonzalez added. "We are confident and we have always had luck working with our community and hoping that individuals do the right thing."

The criminal case is being investigated by the Harris County Sheriff's Office (HCSO). Anyone with information on the identity of the suspects is asked to contact HCSO assault investigators at 713-274-9100 or Crime Stoppers at 713-222-8477

"I really hope they're caught before someone else gets hurt," the victim's girlfriend told the station. "I hope that the people take this and don't say, 'It's white against black.' I don't want this to be the statement. I want it to be, here's a man who was checking out and stood up for himself and he was targeted for that.'"