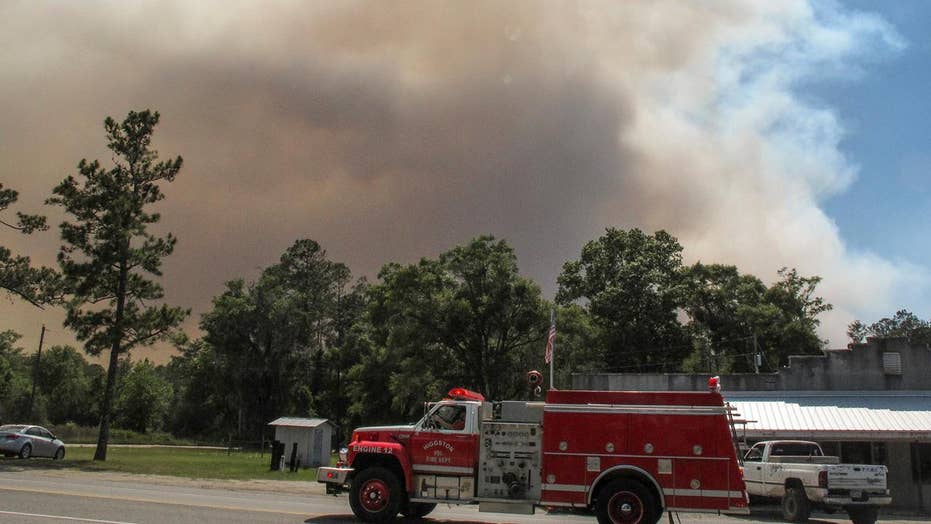 St. George, Ga. – Despite soaring temperatures and dry conditions, firefighters continue to battle flames in and near the Okefenokee National Wildlife Refuge. The wildfire is currently the largest in the country.

“This fire right now is the top priority in the nation,” Tom Stokesberry, a public information officer with the U.S. Forest Service, told Fox News. “It has over 700 firefighters on it from 36 different states, including the District of Columbia and Puerto Rico.”

A thick haze that had covered much of the area has lifted, allowing helicopters and fixed wing aircraft to dump water and flame-retardant chemicals on the fire. But clear skies have also boosted temperatures, posing greater challenges to firefighters on the ground and making drought conditions in the Okefenokee even worse.

“We are in conditions right now that we’re absolutely bone dry, 100 percent ignition, unpredictable weather,” said Michael Lusk, Okefenokee National Wildlife Refuge manager. “People need to get out when they’re asked to get out.”

The area is sparsely populated. But that comes as little consolation to those who live here. Some residents in evacuation zones have chosen to stay behind to watch over livestock and property.

So far, no firefighters or residents have been injured and no structures have been lost. But the refuge manager said it’s too early to predict how long the fires will continue to burn.

“In the past, fires like this have gone out in June when we had really heavy rains. Or, quite frankly, they’ve gone on for almost a year,” Lusk said. “If the peat gets really dry and the fire gets down in that peat, you cannot put that out until there’s a heavy rain like a tropical storm. So at this point, honestly, I would not hazard a guess.”

In St. George, a small Georgia town near the wildfire, volunteers have gathered at a local church to provide meals and supplies to firefighters and other first responders.

“Everybody wants to help,” said Grady Allbritton, pastor of St. George Church of God. “We can’t fight the fires. We don’t have the training and it could be dangerous. But we can cook and we know how to handle food.”