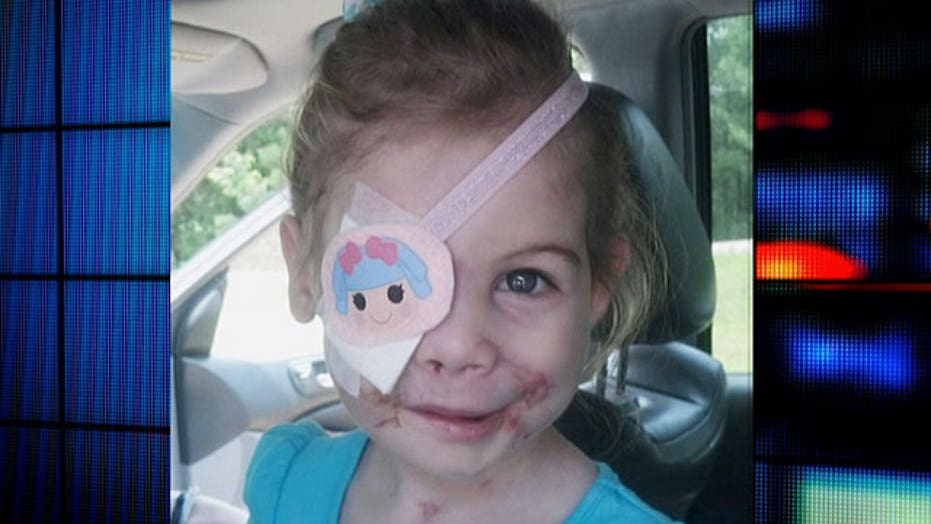 The fundraising website GoFundMe has taken down a page devoted to raising money for a 3-year-old Mississippi girl whose family claims she was asked to leave a KFC restaurant because customers were repulsed by facial injuries she suffered in a recent pit bull attack.

"In lieu of the ongoing uncertainty surrounding the 'Victoria's Victories' online fundraising effort, GoFundMe has temporarily suspended the campaign until the full truth is made clear," CEO Brad Damphousse said in a statement released Tuesday. The site has also offered refunds to donors.

The statement was the latest twist in a controversy that began when a Facebook post from 3-year-old Victoria Wilcher's grandmother went viral. In the post, Kelly Mullins said that she and Victoria had been asked to leave a Jackson KFC restaurant on May 15 by an employee who said the girl's face was "disrupting our customers."

Victoria and her grandmother had just come from an appointment at a nearby hospital to treat injuries the girl had suffered in April while visiting her grandfather's home the previous month. Victoria has already undergone three surgeries to repair a broken nose and cheekbones, a shattered jaw and a damaged right eye socket. The right side of her face was paralyzed and she lost her right eye.

The story prompted donations to pour in to Victoria's family, along with at least one offer of free plastic surgery. However, on Monday, a local paper cast doubt on the family's story, calling it a "Kentucky Fried Hoax."

The paper reported that surveillance video did not show anyone matching the description of Victoria or her grandmother at either of two KFCs near the hospital. In addition, a check of restaurant receipts failed to find an order matching what Mullins supposedly ordered for her granddaughter.

Before the GoFundMe page was suspended, 2,893 donors had given $132,515 toward Victoria's treatment. KFC has said it has found no evidence the incident occurred, but would still honor its pledge to donate $30,000 toward Victoria's medical bills.

Victoria's family has so far stood by their story, although a Facebook page called "Victoria's Victories" has been taken down. The family's attorney released a statement earlier this week in which he did not directly address the claim that his clients had perpetrated a hoax, but appealed for sympathy on behalf of the little girl.

"It is deeply disappointing that other parties have taken opportunity to attack Victoria through social and news media outlets," attorney Bill Kellum said in a statement. "Victoria is an innocent child with very real physical and emotional scars. The focus of her family and ours has always been, and will always be on Victoria and making her whole again."