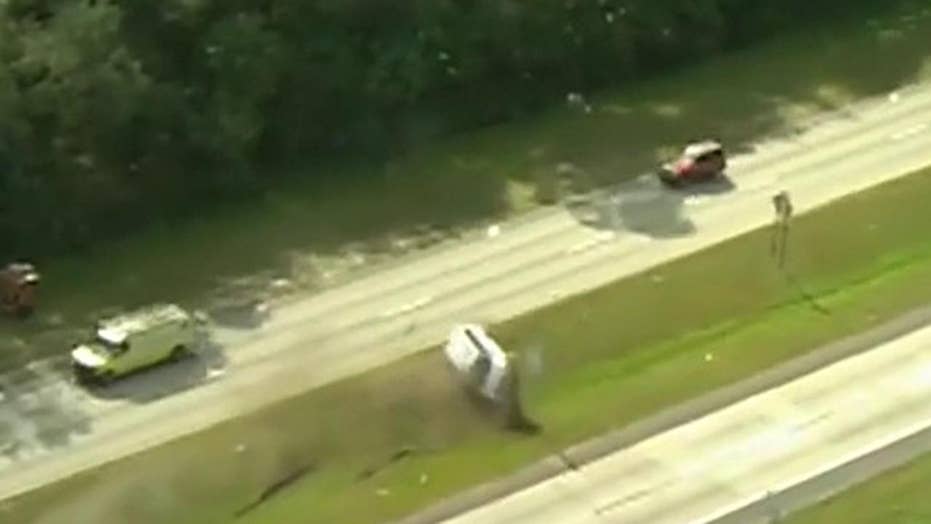 Van flips off road during dramatic police chase in Florida

Officers quickly pull out the driver and her dog after their van veered off the highway and flipped over.

A Florida woman was arrested after leading police on a wild car chase that ended with her flipping her van several times as she attempted to flee, dramatic video shows.

DeLand Police said it all started before 11 a.m. Monday, when they tried to stop a the driver who ran a stop sign.

However, the van’s driver did not stop and was spotted later by a Volusia County Sheriff’s Office helicopter driving erratically on International Speedway Boulevard.

Dramatic footage from the helicopter shows the vehicle, which had been reported stolen in Orange County, make a U-turn and, seconds later, appearing to lose control.

The vehicle rolled over twice before landing on its side.

A small dog in the vehicle escaped the crash unharmed. Different types of prescription pills and heroin were found in the van.

Police identified the driver as Sarah Yurman. She was injured in the crash and taken to Halifax Health Medical Center in Daytona Beach.

Upon her medical release, she will face multiple charges, including attempting to flee, eluding law enforcement and possession of narcotics.