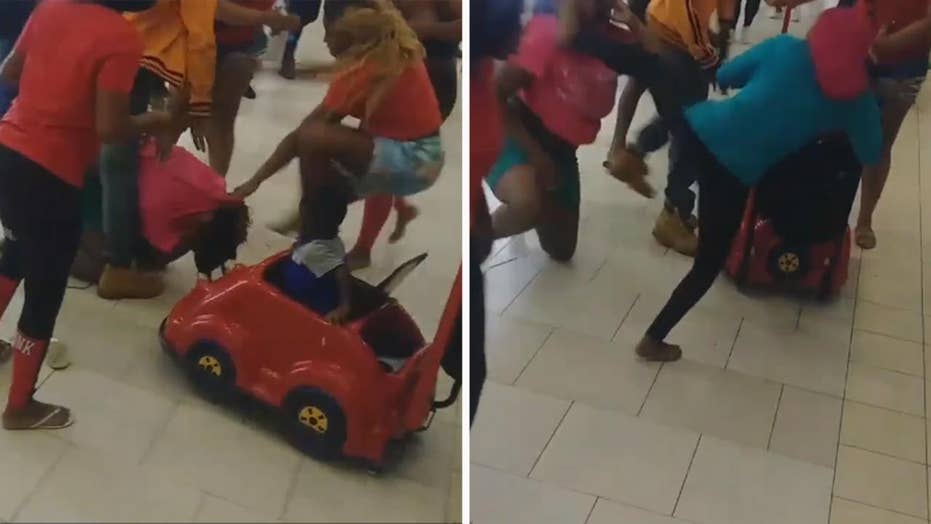 Toddler caught up in middle of Florida mall brawl

A mother pushing a young child in a stroller was caught on video kicking another woman in the face during a wild Florida mall brawl.

The chaos at the Edison Mall in Fort Myers on Sunday afternoon started over comments made about a double murder that happened days earlier in Lehigh Acres, Fox 4 reported, citing statements made to police.

Mariesha Williams told officers that she was approached by an aggressor who said “his blood is on your hands”, referring to 22-year-old Samuel Jones, one of two men found shot to death inside a home Friday. The families of the victims are still looking for answers.

Footage of the brawl, which involved around 10 people, showed a woman pushing a young child in a stroller and kicking another woman in the face. She then abandons the child to fight the woman after she got up and charged at her with her fists swinging.

A man is heard repeatedly shouting "let her go!" during the fight.

"Upon arrival, the incident had already dissipated and police did not find a confrontation going on," Fort Myers Police Department, Capt. Jay Rodriguez told the News-Press. "Approximately two hours later, police were called back to the mall in reference to apparent injuries that occurred previously and spoke to complainants."

Rodriguez said the victims filed a report of simple battery.

Fort Myers police would not comment when asked by Fox News if the murders are linked to the mall brawl. The home the two men were found dead in was at the center of an ongoing investigation, WBBH reported, but police would not elaborate.

A mallgoer who captured video of the brawl told the newspaper that he had never seen anything like it and that it was very stressful.

The Florida Department of Children and Families said it was investigating the woman seen in the video and the agency has not had any prior incidents with her, Fox 4 reported.

Police say they have been keeping increased patrols at the mall this holiday season.

The Lee County Sheriff’s Office said on Monday that a post about the brawl from the Facebook account of a lieutenant’s wife, which contained “racially inappropriate and hateful remarks”, was the result of a hack.

“The hacking was immediately reported to Facebook by the account holder and the account was subsequently deleted so as to avoid any additional postings,” Undersheriff Carmine Marceno said.