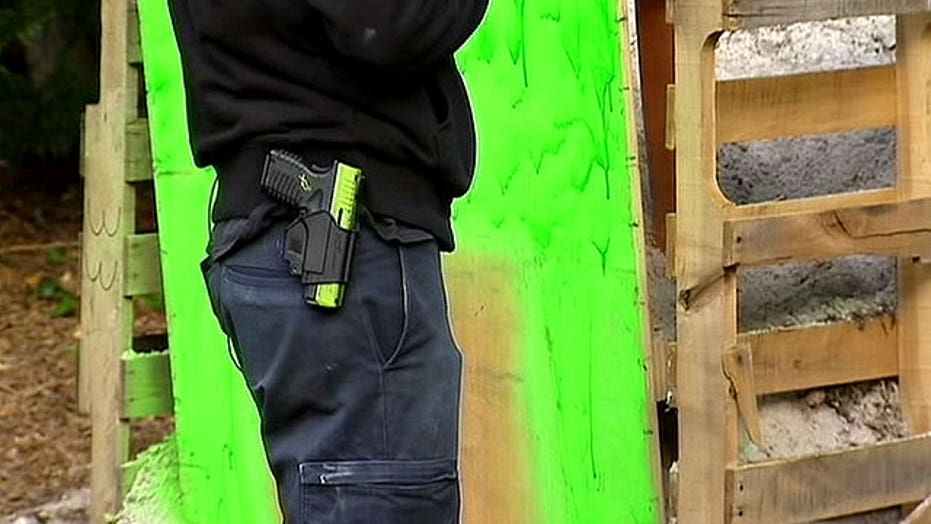 A Florida man has holstered his plan to erect a gun range in his backyard – mere feet from the play areas of children – after his neighbors protested the proposal.

Joseph Carannante, 21, used wooden pallets, cinder blocks and dirt to build a roughly four-foot-tall backstop at which he could fire his Springfield XD-S 9 mm pistol in the backyard of his St. Petersburg house. He said the two jobs that he works take up 16 hours of his day, and he can’t afford the roughly $20 it costs to go to a local gun range.

He agreed to tear down the structure, which he built over the weekend, on Wednesday after iHospital, a Florida-based company that repairs Apple products, and a local radio host separately arranged free, year-long passes to two local gun ranges.

Carannante told FoxNews.com on Wednesday that he was satisfied with the outcome, and said he never violated any laws.

“My intentions were never to instill fear in my neighbors. Never my intention at all,” said Carannante, who ultimately never fired on the target. “I was following the law. It’s a poorly written law, and I do believe it should be changed.”

“I was following the law. It’s a poorly written law, and I do believe it should be changed."

Not surprisingly, neighbors – some of whose properties lie within 30 feet of Carannante’s backyard – were aghast when they caught wind of his plans. But when they complained to local law enforcement, they were told Carannante had every legal right to fire his weapon in his backyard, thanks to a 2011 state law that restricts local communities from enacting their own gun restrictions.

“The whole thing is covered by state statute, so we have to follow the law there,” said Yolanda Fernandez, a spokeswoman for the St. Petersburg police department. “It’s legal to fire in your backyard as long as you don’t do so in a reckless or negligent manner.”

She said that had Carannante fired his pistol, the department would have taken the case to the state attorney’s office, and would have considered whether he violated local noise ordinances.

Fernandez added: “We don’t think it’s a good idea in a residential neighborhood to set up a shooting range in your backyard.”

Kendra O’Connor, 47, who home-schools her four children next door to Carannante’s house in the Lakewood Estates neighborhood, said she was relieved upon learning that he had changed his mind. But she wants to see state law changed to prevent others from taking target practice in their backyards.

To that end, Democratic state Rep. Daryl Rouson, whose district includes St. Petersburg, told FoxNews.com that he has written a bill that would prohibit gun owners from firing weapons on their property, though he insists it would not infringe upon an owner’s right to bear arms.

As for whether Carannante can reconcile with his neighbors, he said he’s confident that things will eventually be smoothed over.

“There’s no bad blood in the neighborhood. We’ll have to work our way back up,” he said. “We just got to take it day by day for now.”